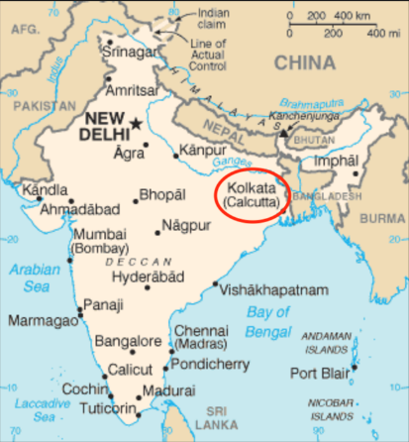 Customs and Cuisine of India

India is so diverse, so the saying goes, that her states are as different from each other as the countries in Europe. Unlike some sayings, this one is rooted in fact and steeped in history. Each state in India has its own “native” language and despite some similarities, oftentimes very different cuisine, attire, music, and traditions. While previous projects have brought us to various regions of India, this month, we will revisit two with delicious variation: the foods of Kolkata and Rajasthan. In our Proven Platter this month, learn more about tandoori cooking, which is adapted to the grill or oven.

Kolkata is the capital city of the State of West Bengal. Behind its name is the story of a city attempting to shed its anglicized identity and reclaiming its precolonial identity, effecting a compromise of sorts with an amalgam of the two. Originally known as Kalikata, meaning “grounds of the goddess Kali” per one interpretation, the city rose to prominence when it was declared the capital of the British Raj. Rechristened Calcutta by the British, the city retained this name until 2001, long after the British had departed and India had gained independence. Interestingly, as an example perhaps of the dichotomy that is often a subtext in colonial cultures, even when the city was officially named and known as Calcutta, the locals referred to it as Kalikata when speaking in Bengali but as Calcutta when speaking in English. Also, despite the official change in name, some institutions in Kolkata continue, even today, to retain their anglicized name, the Calcutta University, The Calcutta Electric Supply Co. being but a few examples.

Among the city’s nicknames are “city of joy”, “city of furious, creative energy”, “city of palaces” and “gateway of Eastern India.”

The cuisine of Kolkata is almost as storied as its art and culture scene. “Bengalis live to eat” so goes a common adage which is embraced and celebrated by the Bengalis as a compliment. Bengali cuisine is a function of its traditional, agrarian lifestyle, it’s location in the Ganges delta with access to many freshwater sources, and the influences of the many cultures that ruled over the city or immigrated there (the Mughals, the British, French, Portuguese, and the Chinese, to name a few). The cuisine is dominated by vegetarian dishes, with rice and wheat being the staple starch. Lentils and legumes of many varieties are the primary protein. Fish is the animal-based protein of choice, be it freshwater, marine, or cultivated. While over 40 species of fish are consumed, Hilsa fish is a favorite and the mere mention of Hilsa fish evokes nostalgia in expat Bengalis.

Among meat, the meat of goat, called mutton in India (not to be confused with meat of a mature sheep) is most commonly consumed. Bengali desserts are an especially famous part of Bengali cuisine and are made mostly of dairy and dairy products.

An aspect of Bengali cuisine that is unique among other cuisines in India is the multicourse style, with each course catering to a different taste. Also interesting is the use of all parts of a vegetable/protein. Little goes to waste. Stalks, peels, flowers, etc. of a vegetable are all put to use either in the same dish or in different dishes. The heavy emphasis on vegetarian food and the lack of food waste is rooted in a repressive and sexist practice from West Bengal’s history, that of “widow food.” Widows in Hindu culture in the Bengals were banished from the family home and lead a life of deprivation, akin to monks within a monastery. They were barred from wearing colorful garments (only a plain white sari), jewelry, or flowers and had to have their heads shorn. Also forbidden was meat and any ingredients deemed to cause “heat” (e.g., onion, garlic). Every scrap was to be utilized. From this rose the concept of “niramish” dishes, vegetarian dishes with few spices that utilized every part of the vegetable. The heads of fish, which tend to be discarded in some cuisines, are not just incorporated into the dish but are often the star of the dish. The flavor of dishes are complex, layered and savory or mildly sweet. Bengali cuisine is known for its inventive combination of spices such as the “panch phoron” (five spices), a mix of cumin, fennel, fenugreek, nigella seeds, and mustard seeds. Heat in dishes come from the addition of fresh green chilies. While whole mustard seeds are used in other cuisines in India, the use of ground mustard paste is uniquely Bengali. Mustard oil is the preferred cooking medium.

A typical breakfast is luchi (puffy fried unleavened bread) with alur torkari (sautéed potato in a tomato gravy), or kochuri (fried, puffy bread with a filling, typically mashed peas sautéed with spices) or porota (triangular or round homemade bread with or without stuffing).

Traditionally the course-wise lunch or dinner involved some of these courses served with rice: bitter greens (shukto), vegetables (shak), dal, animal protein (if being served), chutney, pappad (savory wafers), and desserts. Now, on a given day, lunch and dinner are typically rice (baath) or roti (tortilla like bread) as the starch. Accompanied by lentils (dal) with vegetables (sobji) or fish (machar jhol – fish curry) or meat (kosha mangsho – mutton curry). Machar Jhol is the quintessential Bengali meal and one that is consumed several times a week.

Bengali desserts are a throwback to the Portuguese and Dutch influence, with cottage cheese as the main ingredient in some of Kolkata’s most famed desserts. Mishti Doi (sweet yogurt), Rosogolla (dumplings of cottage cheese soaked in syrup), Shondesh (cottage cheese and sugar confections that are flavored and include nuts/dried fruits), and Khir/Firni (rice pudding that is made with jaggery in the winter) are some of the more famous desserts.

Street food in Kolkatta has won acclaim as the best among the nation.

The Food of Rajasthan

Rajasthan (the abode of Rajas, i.e., Kings) is located to the northwest of the country. Contributing to the area’s cuisine are its history, its legacy of being an abode of Kings/warriors/hunters and its natural features. Among these are the Thar Desert (the “Rajasthan Desert” or “Great Indian Desert”), which occupies much of northwestern part of Rajasthan, making for a dry, sandy area that can get as hot as 129 degrees Fahrenheit in the summer and below freezing in the winter. The food of Rajasthan has evolved to overcome these limitations by using dry ingredients and foods with a long shelf life that are hearty and rich. Desserts are made with full fat milk and ghee (clarified butter). Famous dishes in Rajasthani cuisine include