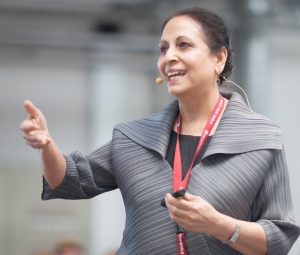 Geeta Mehta is the founder of Asia Initiatives, a non-profit organization that works for women and their families in underserved communities to help improve livelihoods, education and the environment. Asia Initiatives is a past Together Women Rise grantee.  Geeta is the innovator of Social Capital Credits (SoCCs), a virtual currency for social good that is empowering communities in the USA, India, and Kenya. SoCCs won the World Changing Idea award from the Fast Company, and also prizes from MIT SOLVE, and others. Geeta  is also an adjunct professor of architecture and urban design at Columbia University and has been recognized by Women’s eNews as one of the 21 Leaders of the 21st Century.

Geeta serves on the New York City Mayor’s Waterfront Management Advisory Board, and on the Boards of the WomenStrong International and the Center for the Living City. She served as the president of the American Institute of Architects’ Japan Chapter while she lived in Tokyo. She is also the co-author of six books.