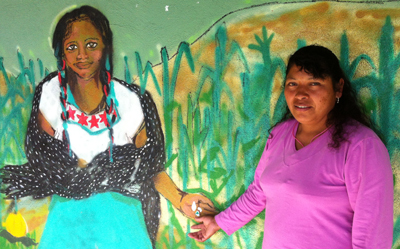 “My daughter suffered from asthma, but now that we have an Ecocina stove it has reduced the amount of smoke in our home and she has a better quality of life.”
– Luisa Leonor, Caluco, Sonsonate, El Salvador

The smoke emitted into their homes exposes them to pollution levels 10–20 times higher than the maximum standards considered safe in developed countries. Smoke from indoor cooking fires is a leading cause of death in children under age five.

StoveTeam International’s Oaxaca Stove Project benefits women and children by protecting them from the dangers of open cooking fires. It also enhances their environment, saves time and labor and creates opportunities for employment equality.

“In countries like Mexico open-fire cooking is common, and cooking kills.”

‘La Mixteca’, where this StoveTeam project is centered, is part of the northwest section of Oaxaca, one of the world’s last bastions of traditional indigenous life.  Today, hundreds of Mixteca villages are threatened with extinction as land degradation and erosion cripple the soil and as migration tears families apart. Over 250,000 Mixtecs had immigrated to the United States by 2011. Some villages have lost more than 80 percent of their population and have become little more than ghost towns.

Straddling the borders of Oaxaca, Guerrero, and Puebla, the Mixteca is one of the most isolated regions in Mexico. Named the “Place of the Cloud People” by the Aztecs, its high peaks and deep valleys have sheltered an ancient way of life that largely vanished from the Americas in the aftermath of the Spanish conquest.

Today the ancient farming methods have been lost, replaced by chemical fertilizers, hybrid seeds and herbicides – the trifecta of modern agriculture heavily promoted in indigenous communities by the Mexican government and international charities during the ‘Green Revolution’ of the 1960s. Combined with slash and burn farming, the Mixteca’s steep terrain, and the loss of other indigenous soil-preserving traditions like multi-cropping, these imported agricultural techniques turned Mixtec corn farming, once one of the world’s oldest and most perfectly integrated agricultural systems, into a soil-eating machine.

According to the World Bank, the Mixteca is an “ecological disaster zone” with one million acres ruined by unchecked erosion and soil exhaustion. Up to 16 feet of topsoil have been lost in some areas, and the region now has one of the lowest corn productivity rates in Mexico. The Mixteca is poorer than nearly all of Latin America, comparable only to areas of Africa, India, and the Gaza Strip.

In rural areas of Oaxaca, a major health and ecology hazard results from the open burning stoves on which women prepare daily meals.  Women and children spend up to 20 hours per week collecting firewood for the family, time that could be spent on education and economic activities. Oaxaca has the highest percentage of burn victims in Mexico due to the open stoves employed by most of the population.

StoveTeam’s Oaxaca Stove Project is establishing a sustainable Ecocina stove factory with Fermina Zarate Dominguez, a local Mixtec woman who will own and run the factory.  This will be the seventh locally owned and operated Ecocina factory in Latin America, and the first to be owned solely by a woman. The factory should be able to produce and sell approximately 200+ stoves per month in the first year and become a sustainable operation producing an increasing number of Ecocina stoves each year in perpetuity. This project will establish a network of women stove users who will be advocates and sellers of clean cooking technology.


Please note: If net donations exceed the featured program amount, we provide sustained program funding (grants to selected programs previously funded by Dining for Women) and provide a reserve to ensure we are able to meet future grant obligations in the case of a shortfall. When the reserve reaches a level of $25,000-$30,000 (after all aforementioned obligations are fulfilled) funds will become available for programs selected by member vote.

Why We Love This Project
One of the most dangerous activities a woman can undertake in the developing world is cooking for her family. We are passionate about dramatically improving health benefits for women and children, as well as reducing the human footprint on the environment.

We love providing seed funding for a female run fuel-efficient stove factory and providing for female employment, in addition to dramatic health benefits for stove users.

Statistics show that smoke from indoor cooking fires is a leading cause of death of children under age five. Millions of women and children suffer painful and debilitating burns as a result of unsafe cooking methods.

Traditional stoves also emit more than one billion tons of greenhouse gases each year, contributing significantly to climate change. They require massive amounts of wood, impacting our environment substantially. This program involves and benefits the entire community; has already been successful in other countries and supports women in a leadership/owner position to help themselves and many other women and children.

StoveTeam has already established six factories in five countries, working with entrepreneurs who have created their own businesses and produced and sold more than 37,000 stoves, improving the lives of more than 280,000 people in Central America.  All factories started with the assistance of StoveTeam International are still producing stoves, and each factory is self-sustaining without further support.

“My house is better now because the stove has so little smoke, and it saves wood and it makes it enjoyable to be inside my kitchen.”
– Milvia Marleny, Los Arcos, Honduras

“I was given a stove as a demonstration for my village. I fell in love with it and kept it. I showed it to my neighbors and now they want stoves, too. I started a new business selling pupusas. My stove has become like a good friend to me, and it’s a wonderful thing in my life. It saves me wood, and is great for cooking.”

Incorporated in 2008 by Nancy Sanford Hughes, StoveTeam International has worked with local entrepreneurs to establish six factories in five Latin American countries.  Nancy first recognized the need for a better cookstove when she volunteered with a medical mission to Guatemala in 2003. During that trip, she met women and children who had suffered debilitating burns from open cooking fires, and saw babies die because their throats were so coated with creosote that they could not be intubated. She decided she had to do something to prevent such tragedies from occurring.

Over the course of several years, Nancy worked with the inventor of the ‘Rocket Stove’ in Oregon to adapt his design for the intended users. The result is the Ecocina – a portable stove approximately the size of a five-gallon bucket that is easily produced with predominantly local materials.

The safe, efficient stove does not require a chimney or installation, and independent laboratory tests show the Ecocina reduces carbon and particulate matter emissions by more than 70 percent and wood usage by 50 percent. The exterior stove body does not get hot enough to cause burns. According StoveTeam Administrator Eleanor Grogan, the stoves are affordable for most families, selling at $50-$60.

Rather than manufacturing and selling the stoves directly, Nancy and her team of volunteers developed a model to create local stove factories in developing countries so that local people could make and distribute fuel-efficient stoves and create sustainable businesses in the process.  With local ownership, the factory owners, managers and employees are highly motivated to produce and sell as many high-quality stoves as possible.

This business model also benefits consumers, as factories are able to quickly adjust to local situations including cooking preferences and local availability of materials.  Those most familiar with the local culture are the most able to effectively promote and distribute the stoves.

Oaxaca is one of 31 states, which, along with the district of Mexico City, make up the country of Mexico – officially called the United Mexican States. Located in Southwestern Mexico, Oaxaca is best known for its indigenous peoples and cultures. The most numerous and best known are the Zapotec and the Mixtec, but there are sixteen that are officially recognized.

These cultures have survived better than most others in Mexico due to the state’s rugged and isolating terrain. Most live in the Central Valley region, which is an important area for tourism, attracting people for its archeological sites such as Monte Albán, native culture and crafts. Oaxaca ranks among the top biologically diverse states in the country for numbers of reptiles, amphibians and plants.
Rich Culture Celebrated in Fiestas

Oaxaca’s rich culture derives from the mingling of the ancient traditions of its vibrant indigenous people with Spanish colonial customs. Each village adds its distinctive touch to celebrations and fiestas. Music and dance, religious observances and the rich art and craft traditions of the region are showcased in a variety of settings in a year-round parade of festivals.

The Guelaguetza is an annual indigenous cultural event that takes place the last two Mondays in July in the state capital and nearby villages . The celebration centers on traditional dancing and includes parades with indigenous walking bands, native food and statewide artisanal crafts such as pre-Hispanic style textiles. Although the celebration is now an important tourist attraction, it retains deep cultural importance for the peoples of the state and is important for the continuing survival of their cultures.

The word ‘Guelaguetza’ means ‘offering’ in the Zapotec language, and its meaning goes far beyond the festival. In traditional Oaxacan villages when there is an occasion for celebration such as a baptism, wedding, or the feast day of the village patron saint, the people attending the party will bring items necessary for the celebration: food, alcoholic beverages, etc.  Each person’s offering, or ‘guelaguetza’, therefore allows the party to take place and becomes part of a reciprocal exchange. This is one of the ways social ties are reinforced and maintained over time.

Día de los Muertos (Day of the Dead) both honors loved ones who have passed and plays with the image and idea of death.   It is held on November 1. The holiday places a huge emphasis on food. Oaxacan street vendors sell whimsically decorated skulls made of sugar for children and adults alike. Families bake or buy special sweet bread known as “pan de muertos,” or bread of the dead.  The bread is accompanied by Oaxaca’s famous hot chocolate laced with cinnamon and ground almonds. (See this month’s Recipes, Customs and Cuisine.) Food and drinks are brought to the graves of loved ones to honor them.

Today, far from an occasion for curious onlookers, traditions associated with the Day of the Dead reflect the Mexican belief in the duality of life and death. While they mourn and miss their dead loved ones, they also believe that death is just an extension of life.  It’s part of a natural progression, not an end. The dead continue to exist and return annually to visit their loved ones. Many of the customs, such as home altars and cemetery vigils, are to help them find their way and to welcome them home. 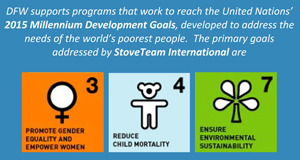 The Oaxaca Stove Project supports UN MDG #3 by empowering women to gain new skills and generate income, gain self-confidence and improve their status in the community by becoming entrepreneurs, and spend less time gathering firewood, freeing them to spend more time on educational and economic activities.