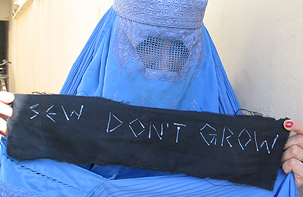 
The DFW grant of $36,416 in November 2010 funded the development and implementation of Rubia’sThreads of Change Program in Nangrahar Province, as originally proposed, and also in the province of Farah. Through our grant, 450 non-literate women from Nangrahar Province graduated from the Threads of Change Program, and 300 from Farah. Our sustained funding will continue to support this program empowering 500 Afghan women and girls to exercise their rights and decision making-power at the household and community levels which will improve their well-beings and that of their families. In November 2012, DFW granted $15,000 a year, in 2012-2014 for a total sustained funding of $45,000. Rubia was supported by Dining for Women as a Featured Program in November 2010, and received $36,416. Rubia Sustained Program Fact Sheet

Mission of Rubia Handwork: Featured (2010), Sustained (2012-2014)
To develop economic opportunities through craft heritage, to support education and to promote health and well being for Afghan women and their families.

Project Summary
Dining for Women's donations will fund the development and implementation of Rubia’s Threads of Change Program. The integrated program in literacy, health, human rights, civics and handwork will impact over 600 women in Nangtahar, Afghanistan, mentoring emerging leaders to continue and expand the program. This program teaches practical skills and disseminates information about rights, civics, income and health, thus empowering Afghan women and their families.

Why We Love This Project
From Rubia: “What differentiates us from other NGOs is the access and context in which we work. Most NGOs working in Afghanistan avoid programs in the countryside due to lack of security. Rubia, through its grassroots network and strong relationship with other local organizations, works primarily among the rural population, the most marginalized of Afghan women; our programs are driven by their needs and capacity. We are committed to improving conditions for Afghan women and their families in incremental, sustainable steps. Above all, we respect and function within the cultural norms and day-to-day realities of Afghan family life.”