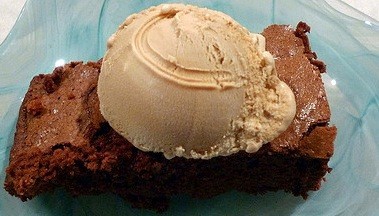 
What makes this brownie Mexican? Usually cinnamon, and in this case we also use Ibarra Mexican chocolate, a round disk of chocolate flavored with cinnamon. It is sold in a yellow box, look for it in the ethnic food section of your grocery store. I’ve added a chipotle chile, which adds a nice warmth and smokiness, not actually spicy, just a bit of a slow burn at the back of your throat. If you can’t find the Ibarra chocolate, just add extra cinnamon and chipotle to your favorite brownie recipe.

Stir the dry ingredients together, the flour, cinnamon, and salt and set aside.

In a double boiler over medium heat, melt the two kinds of chocolate, butter and brown sugar. When the chocolate mixture is melted it will still look a bit grainy, don’t worry about that, but do make sure that everything is melted and smooth.

Remove from heat and gradually drizzle in beaten eggs, whisking all the while. Add vanilla and chipotle chile. Whisk in flour, and pour batter into prepared pan.

Bake for 20 minutes. A toothpick inserted into the middle should come out with just a few crumbs clinging.

For a special presentation top with a scoop of dulce de leche ice cream dusted with a pinch of cinnamon.