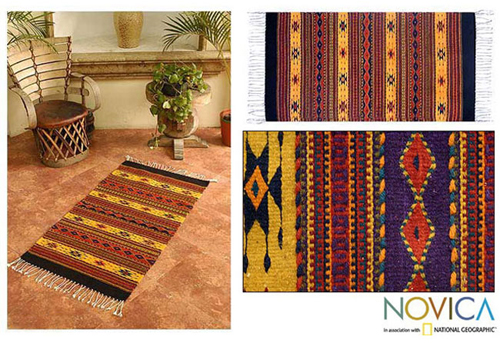 Made by the fourth generation of weavers in the Garcia family. “I remember as a child watching my father working on the loom while my mother and grandmother carded and dyed the wool. We shear the wool, spin it and dye it with tints from the cochineal insect, pomegranate peel, bark from the huajal tree that thrives here, as well as oak and pecan bark. Stones, dried flowers, almost all the rocks and flowers here yield natural colors.” – Alberto Ruiz Garcia

Bright bands of yellow highlight this handcrafted rug. With
deep rich blue borders, this wool rug features hues of orange and purple on brown. Offered in partnership with NOVICA, in association with National Geographic. 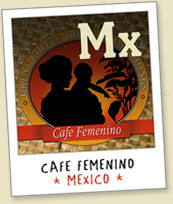 Café Femenino is a special project that empowers women coffee farmers by involving them in every step of the coffee production process. This coffee is grown, processed and traded exclusively by a group of women in southern Chiapas state. The women control the proceeds from the sale of their crop and are fully involved in planning for the next year. The Café Femenino project started in Northern Peru and is now also available from Chiapas.

This women’s cooperative cultivates their Fair Trade, organic, shade grown coffee within the buffer zone for the El Triunfo Biosphere Reserve, a Conservation International project that includes nearly 300,000 acres of ten distinct forest types, from perennial tropical forest to high altitude cloud forest. The farmers use conservation practices such as cover crops, the production of organic fertilizers and ecological coffee wet-processing methods, which help them cultivate their coffee with minimal impact on the surrounding ecosystems.
$13/lb from Grounds for Change

The Mexican Folk Art Cats are each a picture of the artisans mood, experience and palette at the time of painting.

The Circle Cat is a whimsical design creating a melancholy cat mood simply by the slant of the cat’s head and curling of his tail. Request FREE Gift Wrapping during check out if sending to a friend.

Hand crafted in Oaxaca, Mexico of the indigenous Copal wood. Approximately 4 by 3.5 inches. Fair Trade Item made by hand. Each Cat Alebrije is an original signed by the artist. 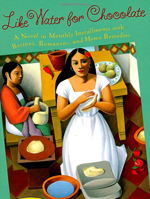 Like Water for Chocolate: A Novel in Monthly Installments with Recipes, Romances, and Home Remedies

A poignant love story told from a woman’s point of view, this novel takes place on the De la Garza ranch in turn-of-the-century Mexico. Cooking and eating play a central role in the tale. The heroine, Tita, a master chef, was literally born in the kitchen. Following tradition, her tyrannical mother decrees that Tita as the youngest must not marry but must instead care for her mother in old age. Unable to communicate freely, Tita concocts recipes so magically potent as to convey her emotions to all who eat her creations- even the chickens-with often hilarious results.

“A tall-tale, fairy-tale, soap-opera romance, Mexican cookbook and home-remedy handbook all rolled into one, Like Water For Chocolate is one tasty entree from first-time novelist Laura Esquivel.”— San Francisco Chronicle 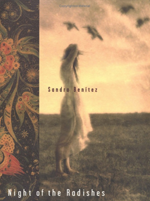 Night of the Radishes

Annie Rush has it all. A loving husband, adoring sons, an interesting job. But tragedy haunts her. Her identical twin sister died in a horrifying farm accident when the girls were nine years old, and in the wake of the grief and guilt that followed, her older brother left home for good. The death of her mother prompts Annie to seek her brother and revisit her long-lost past. Her search takes her to Oaxaca, where her brother was last seen, during the vibrant Christmas celebrations and the colorful Night of the Radishes festival; and ultimately, deep within herself.

“As comforting and predictable as a box of caramels, Benitez’s gentle romance is all about reassurance and wish fulfillment. Annie buries her mother and leaves her stalwart spouse and fine young sons at home in Minneapolis at Christmastime to go to Oaxaca in search of her brother. He had disappeared in the wake of family tragedy: the accidental death of Maggie, Annie’s twin, at age nine and their dad’s later suicide. Oaxaca is vividly evoked, down to the radish folk sculptures of the title.” – Booklist 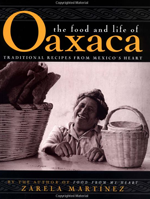 The Food and Life of Oaxaca, Mexico

The Food and Life of Oaxaca, by New York restaurateur Zarela Martinez, is a fascinating cultural study disguised as a great cookbook. Martinez is part of the new renaissance of Mexican food writers and chefs, such as Rick Bayless, who reaffirm that culinary awareness goes hand in hand with cultural awareness.  In fact, Martinez, a Mexican, credits her time in Oaxaca as “redefining my whole understanding of Mexico.” Oaxaca is one of the most biologically and culturally diverse regions in Mexico, echoed throughout the book both the recipes and the accompanying essays. Martinez adamantly insists that to cook a dish, you must first understand it. She provides not only the how-to of a recipe, but also the why.

“How apt that a chef who prepares such dazzling Mexican food should lead us through Oaxaca. The soul and lore of this magical place will add new life to your table through Zarela’s recipes.” – Shelia Lukins, author of USA Cookbook, Food Editor of Parade Magazine 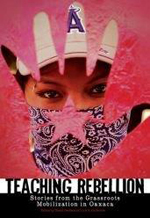 Teaching Rebellion: Stories from the Grassroots Mobilization in Oaxaca

In 2006, Oaxaca, Mexico came alive with a social uprising that earned the admiration of communities organizing for social justice around the world.  What began as a teachers’ strike demanding more resources for education, quickly turned into a massive movement that demanded direct, participatory democracy. Hundreds of thousands of Oaxacans raised their voices against the abuses of the state government. In the now legendary March of Pots and Pans, two thousand women peacefully took over and operated the state television channel for three weeks. Accompanied by photography and political art, Teaching Rebellion is a compilation of testimonies from longtime organizers, teachers, students, housewives, religious leaders, union members, schoolchildren, indigenous community activists, artists and journalists—and many others who participated in what became the Popular Assembly of the People’s of Oaxaca.

“Teaching Rebellion presents an inspiring tapestry of voices from the recent popular uprisings in Oaxaca. The reader is embraced with the cries of anguish and triumph, indignation and overwhelming joy, from the heart of this living rebellion.” – Peter Gelderloos, author of How Nonviolence Protects the State 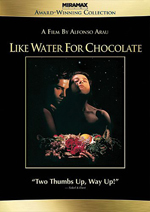 In Spanish with English audio & subtitles

“Expect to be very hungry (and perhaps amorous) after watching this contemporary classic in the small genre of food movies that includes Babette’s Feast and Big Night. Director Alfonso Arau (A Walk in the Clouds), adapting a novel by his former wife, Laura Esquivel, tells the story of a young woman (Lumi Cavazos) who learns to suppress her passions under the eye of a stern mother, but channels them into her cooking. The result is a steady stream of cuisine so delicious as to be an almost erotic experience for those lucky enough to have a bite. The film’s quotient of magic realism feels a little stock, but the story line is good and Arau’s affinity for the sensuality of food (and of nature) is sublime. You might want to rush off to a good Mexican restaurant afterward, but that’s a good thing.” – Tom Keogh, Amazon 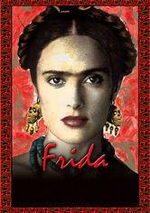 Nominated for 6 Academy Awards including Salma Hayek for Best Actress, Frida is a triumphant motion picture about an exceptional woman who lived an unforgettable life. A product of humble beginnings, Frida Kahlo(Hayek) earns fame as a talented artist with a unique vision. And from her enduring relationship with her mentor and husband, Diego Rivera(Alfred Molina), to her scandalous affairs, Frida’s uncomprimising personality would inspire her greatest creations.

“Maverick director Julie Taymor (Titus, the Broadway stage production of The Lion King) pulls out a wealth of gorgeous visuals to capture everything from the horrific bus accident that damaged Kahlo’s spine to her and Rivera’s trip to New York City, where Rivera’s political leanings ruptured a commission from the Rockefeller family.” – Bret Fetzer, Amazon 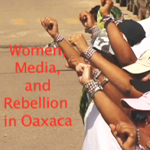 Women, Media, and Rebellion in Oaxaca

This documentary by Gabriela Martínez tells the story of a media takeover that changed the nature of politics, and how we understand media, social movements, and in particular the role of women in both media and social movements.

Following a teacher’s strike in Oaxaca, Mexico, in August 2006, about a thousand women marched to the installations of COR-TV, taking over the stations to voice their political, social, economic, and cultural concerns while also calling for the resignation of the State’s governor, Ulises Ruíz Ortíz. The film opens with the 2007 celebration of the first anniversary of the takeover, and quickly moves to narrate how and why women got to this point.

Martínez lets the women and all other actors involved in the events speak for themselves. Issues of justice, globalization, women’s rights, and human rights violations converge at the core of a social uprising, in which media becomes an important site for the struggle.

Julieta Venegas (born November 1970) is a Mexican singer, instrumentalist, and songwriter who performs Spanish-language rock and pop music. Venegas, who grew up in Tijuana, began studying music at the age of eight and went on to join several bands, including Tijuana No!, before starting a career on her own. In addition to singing and writing her own songs, she plays instruments including acoustic guitar, accordion, and keyboard. She has recorded 11 albums and won two Latin Grammys and one Grammy. She speaks English, Portuguese and Spanish fluently.

Lila Downs, born in Oaxaca, is the daughter of Mixtec singer Anita Sánchez and Allen Downs, a Scottish-American art professor and filmmaker. She performs her own compositions as well as Mexican traditional and popular music. She incorporates indigenous Mexican influences and has recorded songs in indigenous languages such as Mixtec, Zapotec, Mayan, Nahuatl and P’urhepecha. 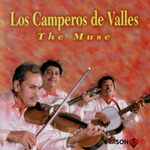 Los Camperos del Valle – The deepest-rooted Mexican folk music is son (literally ‘sound’), a broad term covering country style that grew out of the fusion of indigenous, Spanish and African music. Son is essentially guitars plus harp or violin, often played for a foot-stomping dance audience with witty, frequently improvised lyrics. There are four main types of son, with perhaps the best-known being son jaliscenses, which forms the repertoire of many Mariachi bands. Los Camperos del Valle specializes in son huasteco and is one of the most famous son groups in Mexico.