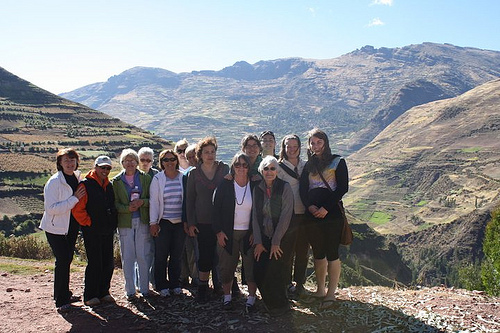 Peru trip connected travelers to INMED and other experiences

Our trip was divided into three legs. The first, starting with the pre-trip, was a combination of Spanish language classes, traditional cooking and a week long homestay in the mountain region of Huancayo. This time was spent with eight of the women focusing on culture, language and food. For the second leg of the trip, we visited Pucallpa and the surrounding jungle region, which is in the North East, with visits to INMED’s pre and post natal clinics. The final region of the trip was back to the mountains in Cuzco and Aguas Calientes, where we visited markets, Women’s weaving Project, Cusco Kids Center and hiked Machu Picchu, plus so much more.

During the INMED portion of our trip (a featured DFW program in 2010) we got to experience four very different clinic environments. First, we drove to a poor village, where we put on a baby shower for 75 pregnant and new mothers. The village teens performed a play as a way of continuing the education of the village around maternal mortality rates, which are some of the lowest in Latin America. Currently only 44 percent of births in the rural areas of Peru are attended by a medical professional. Healthy Babies program by INMED is trying to change this, by making it acceptable, even expected to attend a clinic for pre and post natal care, up to the age of three for the child. The Peruvian women were very thankful for the donations of clothing, toys, medicines that were brought by our group. We also purchased a netbook computer to for the doctors of this clinic to help with record keeping and communication needs for better care.

The second day we drove 2.5 hours in the van, then got on boats for another 2 hours to go up the river, through the jungle, arriving in a remote, river village that had a clinic without running water or electricity. The medical team was passionate about the village and shared their educational program as well as allowed some of the village women to share their stories with us and what they have learned in the years that the clinic has been there. This village had many indigenous people who only spoke the tribal language of Quechua. So, these doctors are dealing with culture and language barriers as well. This day was a favorite for most of us, due to the deep jungle views and experience of traveling by boat.

On the third day, we visited a large hospital in an urban setting where we were trained by the community volunteers that go door to door on a three month rotation. These women, who walk everywhere they go, educate, keep statistical data and, by their in house visits, help to change the cultural norm of not using medical care. It was one of the most powerful experiences that we got to have in terms of learning and seeing first-hand how to look for and treat dengue fever, as well as keeping a count of the children and newly pregnant women in this community.

On our last day, we traveled by boat again across a large lake to a village that deals with high numbers of spousal abuse and teen pregnancy. This was explained because of the lack of jobs and ability to make money there was a higher number of alcohol and drug related issues. This clinic, although remote, had the most supplies and a new residential psychologist to help with the emotional problems of the region. We attended an educational clinic with the area’s mothers and children talking about health and when to come to the clinic. Our experience with this organization was amazing and showed how much work there is to be done, but how organized and thorough INMED has been in their years of working in Peru.

The last five days of the trip took us to South Eastern Peru, near Cuzco and the surrounding region. Here we had much time in the markets to look at the weaving and carving by the local artisans. We also traveled by train and bus to Machu Picchu, which is in its 100th year anniversary of discovery. We arrived in time to see the sun come up over the Andes mountain range and hit the amazing Incan ruins. We spent the day exploring and feeling the magic of the history in such a sacred place.

For a trip filled with so much and made up of such diverse women from different backgrounds and ages ranging from 20-71, we had a trip of a lifetime. We all came back with a deeper connection to the women and children of the world as well as to how meaningful the work of Dining For Women is. Such a small amount can make such a big difference in so many villages in Peru.

Dining for Women is offering another journey, similar to this one, to Peru in October 2014. Learn More.