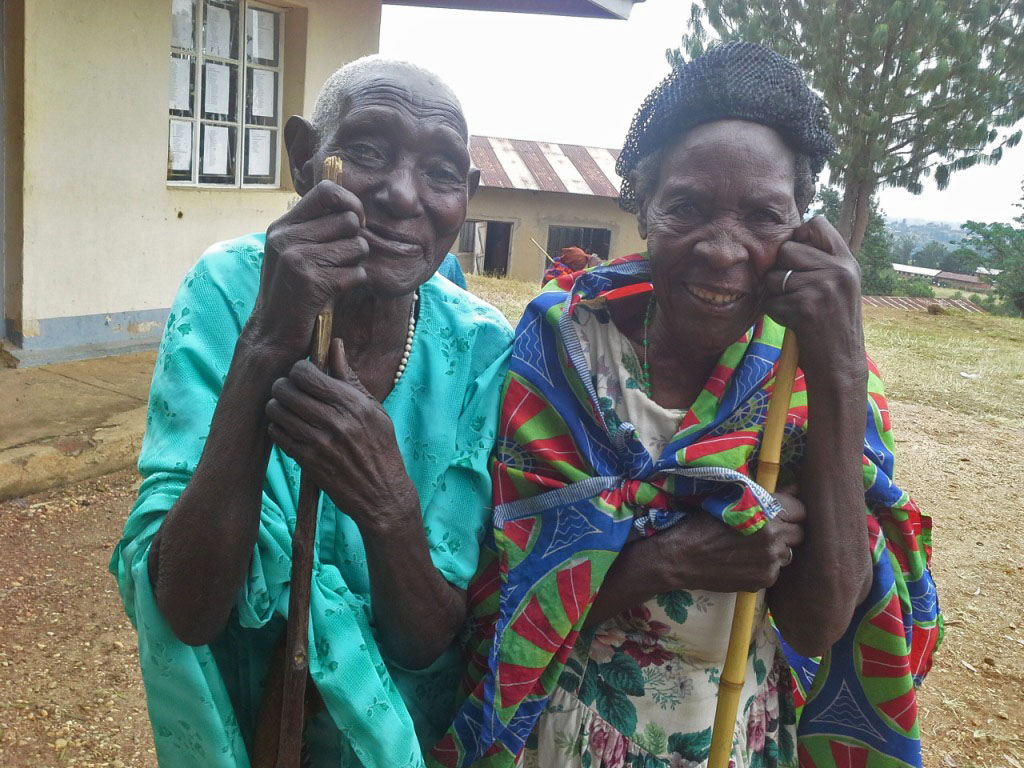 “Grandmothers are the pillars in the society, holding the society together. They are unsung heroes that people don’t recognize.”
— Twesigye Jackson Kaguri, founder, Nyaka AIDS Orphans Project

More than two million AIDS orphans are living in Uganda — most  in the care of their elderly grandmothers. Under better circumstances, these women might have received support from their adult children but are instead raising their own grandchildren.

Dining for Women’s $45,000 grant to the Nyaka AIDS Orphans Project will provide 7,000 grandmothers with business and life skills to help them raise the 43,000 orphans in their care.

Communities traditionally rely on a familial system of caring for orphaned children based on cultural traditions  where they are cared for by an aunt or uncle. But the HIV/AIDS epidemic has taken so many lives in one generation that many grandmothers are now caring for all of their grandchildren.

The grandmothers and children living in the rural districts of Rukungiri and Kanungu, where the Nyaka AIDS Orphans Project operates, have few sources of income beyond subsistence farming. Many struggle to feed themselves. Girls of school age are often required to farm and many are married at a young age to reduce the financial burden on the family.

The main goal of the Training of Trainers Program is to help grandmothers in rural Uganda overcome poverty by training them in the following business and life skills: 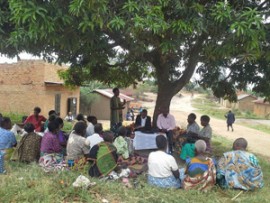 There are 91 self-organized ‘Granny groups’ in the region – each group averages 75 women between the ages of 60 and 80 who are raising orphaned children. Each group will select three leaders to participate in the initial training. The selections are generally made based on literacy, mobility, and the ability to leave their homes unattended for the required time.

Nyaka will conduct five sessions to train 273 grandmothers — approximately 55 women will participate in each. The five-day, six-night sessions allow the participants to relax and learn together with the trainer — a grandmother herself — who meets them halfway from Kampala (a five-hour drive each way). She is a safe peer for the group to relate to.

The representatives from each Granny group will use their group’s regular monthly meetings to share their new knowledge and skills during the three months following their own training. They will become experts and community business leaders who will model leadership for the young girls they care for. 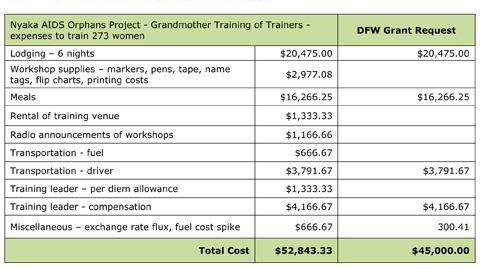 Why We Love This Project
Nyaka AIDS Orphans Project targets a unique population that is not often considered and takes a different approach to viewing and dealing with the HIV/AIDS crisis. The train the trainer’s method is usually successful and well leveraged. The program puts the decision making in the hands of groups of women and they make the decisions regarding income and benefits.

The Grannies Project began in 2007. This program started in order to provide a system of support for the many grannies facing parenthood in their twilight years. The first Training of Trainers (TOT’s) workshop was also held that same year. Since it began, the Training of Trainers workshops have helped hundreds of grannies to share their skills and knowledge with each other. 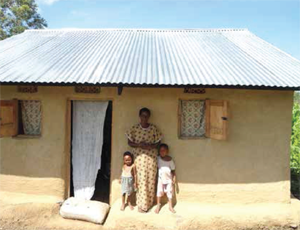 “For the last three years, I lived without having a place to call my home. I had been residing with my two small grandchildren in a very small room at my neighbor’s home, after the collapse of my house. No relatives had been able to visit me. I tried unsuccessfully to sell a small parcel of my land so that I could build a new home. Nyaka came to my rescue. Thanks to my new home, I’ve been able to keep my land that will go to my grandchildren when I die and for this I am especially grateful. Now I can concentrate on the education of my grandchildren.”
— A grateful grandmother

“I wanted to join because I saw the lives of grandmothers transformed. I felt blind, with no one to guide me, until I joined my group.”
— Anonymous

“Even if I die today, I will go to my grave a happy woman.”
— Molly, an 85- year-old grandmother whose group voted to build her a new home, a pit latrine, and a kitchen. 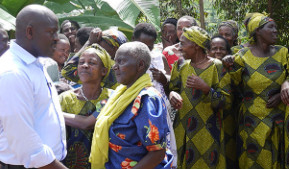 Twesigye Jackson Kaguri grew up in the village of Nyakagyezi and graduated from Makerere University in Kampala. In the 1990’s he became a visiting scholar at Columbia University where he studied Human Rights Advocacy. He made regular trips home to his village, bringing school supplies to distribute. On a visit in 2001, he awoke one morning to discover many grandmothers surrounding his family home. They begged Kaguri to help their grandchildren, and he felt an obligation to give more than just pens, pencils, and paper. He and his wife used their savings to purchase land and build a primary school.

The project has grown into two schools, Nyaka Primary School and Kutamba Primary School. A secondary school is under construction. The project expanded to produce a radio program that brings a voice to orphans and grandmothers, a 17-acre farm that produces food for the schools, clean water systems, a community library at each school, a medical clinic, and a robust international volunteer program.

The ‘Granny groups’ began in 2007 in an effort to build stronger, more connected communities and to increase the sharing of resources and knowledge. Nyaka manages and supplies micro-funds to the groups so they can invest in small income-earning businesses, provides houses, smokeless kitchens, and clean pit-latrines to the most destitute (the groups select grandmothers who need new homes), as well as gardening seeds and tools. The first Training of Trainers workshop was held in 2007.

Nyaka’s long-term investment and vision is to educate children to become the future leaders of Uganda. To meet immediate needs, they try to provide the oldest grandmothers with whatever assistance they need to survive. For the many able-bodied grandmothers who need access to credit and training toward self-sufficiency, Nyaka provides training and business assistance to break the cycle of poverty.

Kaguri was named a CNN Hero in 2012, has been named a Heifer International Hero, recognized in Time Magazine’s ‘Power of One’ Series, and spoken to the UN about his work.

Uganda is located in Eastern Africa and is slightly smaller than the state of Oregon. The country borders Congo, Kenya, Rwanda, Sudan, and Tanzania.