This month’s fair trade recommendations are products made by grandmothers in rural southwestern Uganda. The women participate in the Grandmother Training programs through NYAKA AIDS Orphans Project, our featured program.  This basket is lovingly handcrafted using papyrus (a thick paper-like material produced from a tissue in the stem of the papyrus plant) and sisal (a genus of flowering plants yielding a stiff fiber), resulting in a very sturdy and durable (as well as attractive!) product. 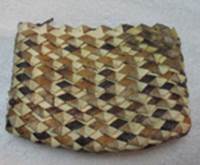 The Nyaka AIDS Orphans Project bought this bag, and all of their products, directly from their creator at a fair Ugandan wage. All proceeds are used to fund Grandmother Trading Programs that teach valuable skills such as parenting, nutrition, health, finance, and gardening. When you purchase from the Nyaka Grandmother Shop and one of the 7,000 grandmothers whom Nyaka partners with, you become part of a growing circle of people who are helping impoverished Ugandan women rise out of poverty. 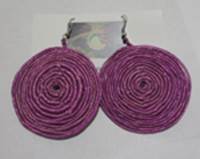 The average grandmother cares for up to seven grandchildren after the death of their own children due to HIV/AIDS. Nyaka purchases the products from them directly as a way for them to generate consistent income for the orphans in their care. These hand-made items make an amazingly thoughtful gift for any and every occasion. 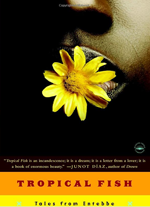 The author follows a Ugandan girl as she navigates the uncertain terrain of adolescence. Set mostly in pastoral Entebbe with stops in the cities Kampala and Los Angeles, Tropical Fish depicts the reality of life for Christine Mugisha and her family after Idi Amin’s dictatorship.

Three of the eight chapters are told from the point of view of Christine’s two older sisters, Patti, a born-again Christian who finds herself starving at her boarding school, and Rosa, a free spirit who tries to “magically” seduce one of her teachers. But the star of Tropical Fish is Christine, whom we accompany from her first wobbly steps in high heels, to her encounters with the first-world conveniences and alienation of America, to her return home to Uganda.

As the Mugishas cope with Uganda’s collapsing infrastructure, they also contend with the universal themes of family cohesion, sex and relationships, disease, betrayal, and spirituality. Anyone dipping into Baingana’s incandescent, widely acclaimed novel will enjoy their immersion in the world of this talented newcomer. 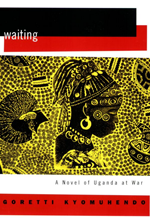 By Goretti Kyomuhendo (The Feminist Press at CUNY, 2007)

Set during the final year of Ugandan dictator Idi Amin’s reign, this book illuminates the fear and courage of a small, close-knit community uncertain of what the edicts of a lunatic and his uncontrollable army will bring with each day. As Amin’s war with Ugandan exiles and the Tanzanian army ends, one family learns what it takes to survive and eventually to plan for a new life.  Author Goretti Kyomuhendo won the Uganda National Literary Award for Best Novel of the Year in 1999. She currently directs FEMRITE, a women’s publishing house in Uganda.

“13-year-old Alinda’s first-person recollections of the dangerous last year of Idi Amin’s rule in Uganda. As the front of rebel-versus-Amin fighting approaches her village, Alinda’s mother is about to give birth. Rampaging soldiers reach the village and kill the midwife just as a son is born. Alinda must cut the cord. She must tend the baby, too, for as she obliquely imparts later, her mother dies.” – Booklist 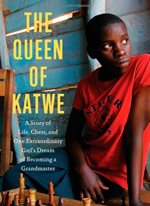 The Queen of Katwe: A Story of Life, Chess, and One Extraordinary Girl’s Dream of Becoming a Grandmaster

Phiona Metusi sleeps in a decrepit shack with her mother and three siblings and struggles to find a single meal each day. Phiona has been out of school most of her life because her mother cannot afford it, so she is only now learning to read and write. Phiona Mutesi is also one of the best chess players in the world.

One day in 2005, while searching for food, 9-year-old Phiona followed her brother to a dusty veranda where she met Robert Katende, who had also grown up in the Kampala slums. Katende, a war refugee turned missionary, had an improbable dream: to empower kids through chess—a game so foreign there is no word for it in their native language. Laying a chessboard in the dirt of the Katwe slum, Robert painstakingly taught the game each day. When he left at night, slum kids played on with bottlecaps on scraps of cardboard. At first they came for a free bowl of porridge, but many grew to love chess, a game that—like their daily lives—means persevering against great obstacles. Of these kids, one stood out as an immense talent: Phiona.

By the age of 11, Phiona was her country’s junior champion and at fifteen, the national champion. In September 2010, she traveled to Siberia, a rare journey out of Katwe, to compete in the Chess Olympiad, the world’s most prestigious team-chess event. Phiona’s dream is to one day become a Grandmaster, the most elite title in chess. But to reach that goal, she must grapple with everyday life in one of the world’s most unstable countries, a place where girls are taught to be mothers, not dreamers, and the threats of AIDS, kidnapping, and starvation loom over the people. 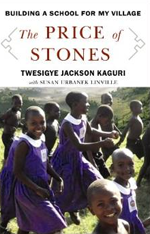 The Price of Stones: Building a School for My Village

Growing up in rural Uganda, Twesigye Jackson Kaguri overcame poverty to earn a degree from the national university and worked as a human rights advocate, eventually making his way to pursue studies at Columbia University. When he returned to his village in Uganda with his wife, they were overwhelmed by the plight of his village’s many AIDS orphans and vowed to open the first tuition-free school in the district for these children. Faced with many daunting obstacles including little money, skepticism among friends in both the U.S. and Uganda, corrupt school inspectors, and a lack of supplies, he doggedly built one classroom after another. Eventually they had an accredited primary school filled with students dreaming of becoming the future doctors, teachers, lawyers, engineers, and even presidents of Uganda.

The Price of Stones is the stirring story behind the founding of the Nyaka AIDS Orphans School. Weaving together tales from his youth with the enormously inspiring account of the remarkable challenges and triumphs of the school, Kaguri shows how someone with a modest idea is capable of achieving monumental results.

In a country where a high school education is generally reserved for boys, Hoctavia is one of 31 children, most of whom dropped out of school.  Ruth lives in a tiny apartment in one of Kampala’s poorest neighborhoods with her mother and three siblings.  Graduating from high school is the only way they can lift themselves and their families out of poverty. Like millions of girls in Africa who will never move beyond primary school, their challenges are not unique.  Their journey is. 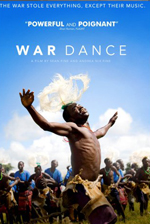 “The superb documentary War Dance reveals the redemptive power of music, even in the most horrific places. Focusing on three children in their early teens in war-torn Uganda–stoic Nancy, driven Dominic, and soft-spoken Rose—War Dance tracks the efforts of the school of a refugee camp called Patongo to compete in Uganda’s countrywide music competition. The contrasts are staggering; in interviews, the children describe their parents being killed by rebel soldiers, then footage of rehearsal shows them joyfully singing and dancing with their classmates. Some of the sequences are harrowing to watch, but without them we wouldn’t understand how hard-won are the feelings of pride and accomplishment as their school performs for the competition’s judges.

The heartbreaking circumstances and the emotional openness of the three teenagers makes War Dance even more compelling. In one particularly striking scene, Dominic talks to a captured rebel officer, hoping to learn if his brother is still alive. As they talk, the soldier – who’s around the age Dominic’s brother might be – tries to be helpful, and explains almost offhandedly why the brother is most likely dead. The casualness of this conversation, devoid of Hollywood histrionics, speaks volumes about how violence has infiltrated these people’s daily lives.” 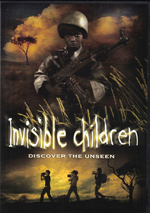 In the spring of 2003, three young filmmakers traveled to Africa in search of a story. What started out as a filmmaking adventure transformed into much more when these boys from Southern California discovered a tragedy that disgusted and inspired them, a tragedy where children are both the weapons and the victims. After returning to the States, they created this documentary – a film that exposes the tragic realities of northern Uganda’s night commuters and child soldiers.

Samite is the stage name for African musician Samite Mulondo. Originally from Uganda, he now lives in Ithaca, New York. A multi-instrumentalist steeped in the traditional culture of his Ugandan upbringing, Samite was forced to flee his home by a brutal war. After years as a refugee in Kenya, he landed in the U.S. and began using his musical vision to give back to distraught people in African conflict zones

Samite is also a co-founder of Musicians for World Harmony, a nonprofit organization that introduces music to African orphans.

TRUST, Samite’s ninth CD, is a collection of instrumentals that sprang from his deep knowledge of tradition. On this CD the producers explore the storytelling powers of many instruments and Africa’s melodic roots. (All proceeds from the sale of TRUST go directly to Musicians for World Harmony.)

Women have always been at the center of sub-Saharan music, as they were the keepers of the hearth, intimately involved in the life-sustaining mysteries of agriculture, food preparation, birth, and death. However, Africa, like the rest the world, is in the throes of social change. Female roles are evolving and the artists heard here represent a confident, worldly sensibility. The roster encompasses Dorothy Masuka’s comfortable, gospel-flavored South African jazz, Maria de Barrios’ sensual Cape Verdean morna, and a liltingly tonal ballad from Paris-based Algerian refugee Souad Massi. But a major reason to purchase this album is the track by Khadja Nin of Burundi; her deep-toned, knowing, unpolished voice transforms a Stevie Wonder tune into an ecstatic anthem of empowerment. Each singer emerges as a force to be reckoned with as, one by one, their voices salute the earth and soar into the heavens. 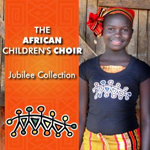 The African Children’s Choir is composed of children aged 7 to 10 years. Many have lost one or both parents through the devastation of war, famine and disease. They represent all the children of a continent and they demonstrate the potential of African children to become strong leaders for a better future in their land.

In 1984, in the midst of Uganda’s bloody civil war, human rights activist Ray Barnett was called on to help the many thousands of orphaned and starving children, abandoned and helpless to feed and protect themselves. Ray and his team came up with a unique approach – “Inspired by the singing of one small boy, we formed the first African Children’s Choir to show the world that Africa’s most vulnerable children have beauty, dignity and unlimited ability.”