One of the greatest impacts of DFW, in addition to supporting women and girls in developing countries, are the communities which our chapters become. Within those communities come movements and relationships that impact our lives and those around us. For some chapters, their communities are enhanced and strengthened through activities outside of their monthly meetings.  Here are two great examples of how we touch more than we ever imagined with the power of DFW: our DC, Washington-4 chapter and our DE, Wilmington-2 chapter.

Recently, a small group of DFW members helped Angela Maxwell begin her walk across the U.S.  Angela has been walking solo around the world for five years, touching four continents, a handful of islands, and covering some 20,000 miles. She is currently walking across the U.S. from the Atlantic to the Pacific. 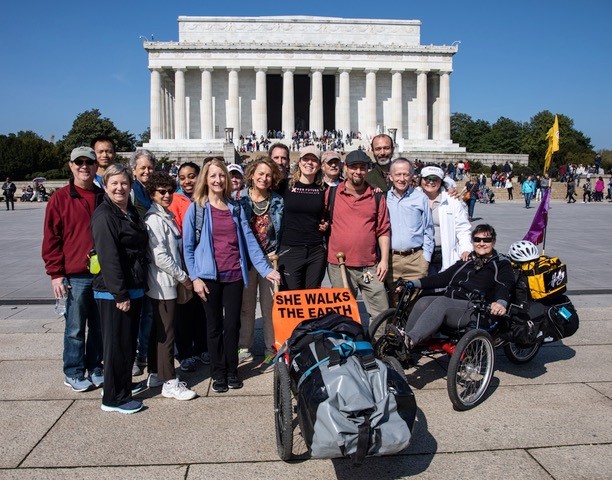 Joining Angela for the first seven miles of her walk were  the Co-Leaders of our DC, Washington-4 chapter, Denise Woods and Shereen Arent, along with two brand-new members Michele Cohen and Kemi Riley-Telfort. The connection with DFW is that the U.S. walk is raising money for our March Featured Grantee, Her Future Coalition.  Specifically, Angela’s U.S. walk is raising funds to build and expand shelters for 100 girls in the Red Light areas of Kolkata, India. Angela states the following on her website:

“Walking around the world has opened my eyes more than ever to the struggles women in so many parts of the world still face. I want to use this last leg of my journey to shine a light on women’s and girls’ issues, and the powerful impact we can have on the lives of women worldwide, when we walk together as one.”

Chapter members found out about the walk when they Skyped with Sarah Symons, Executive Director of Her Future Coalition, during their March meeting. According to Shereen, “the walk served to further engage the two new members, and we were able to recruit at least two other walkers to DFW! How wonderful that DFW supports such great organizations as Her Future Coalition and how wonderful to be in DC so we can take advantage of opportunities like this to further support them and to raise awareness and new members for DFW!”

The members of the DE, Wilmington-2 chapter wanted to share the spirit of giving with a project closer to home. Here is the inspiring story from Co-leaders Mary Chan and Regina Allen: 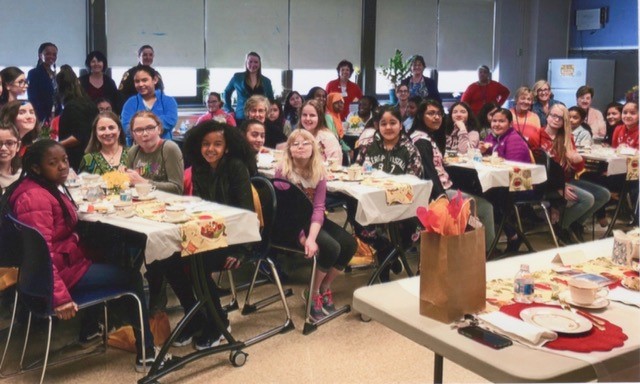 In the late winter of 2016-2017, after exploring several options, we selected a small elementary school to adopt and partner with. The school, Anna P. Mote Elementary School, has less than 400 students. Ninety-nine percent of the students are described as coming from “low-income” families; 56% are Hispanic, 28% White, and 14% Black. The teaching staff reflects a serious commitment to the students: 100% of them are certified and 93% have been at the school for more than three years. In spite of this, only 31.50% of students were proficient in English language arts (ELA) last school year, and 28.50% of students were proficient in math last school year. Thus we had found a project worth our efforts.

Through our contact person — the welcoming and enthusiastic School Nurse — our relationship has thrived.  Our contributions for the unmet needs of the students, as determined by her good judgment, have, for example, included the purchase of undergarments, sweat pants and sweat shirts for the children who do not have adequate clothing when the seasons change and the purchase of a set of bunk beds for one family able to move from their car into adequate living space. 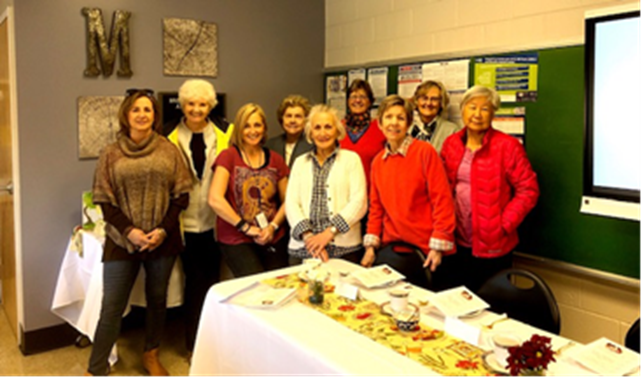 Additionally, once we were cleared to work in the public school system, our members volunteered to work with children in the classroom with reading and math. The highlight of our giving is the annual “Ladies Tea” for graduating 5th Grade Girls, a formal tea to honor their upcoming ascent to middle school with inspirational women from a variety of occupations to inspire and challenge them.

DFW was the driving force for our association with Anna P. Mote School.  We hope that what we are doing is a worthy example of what DFW stands for.