Customs and Cuisine of Cambodia
← Return to Project

Customs and Cuisine of Cambodia 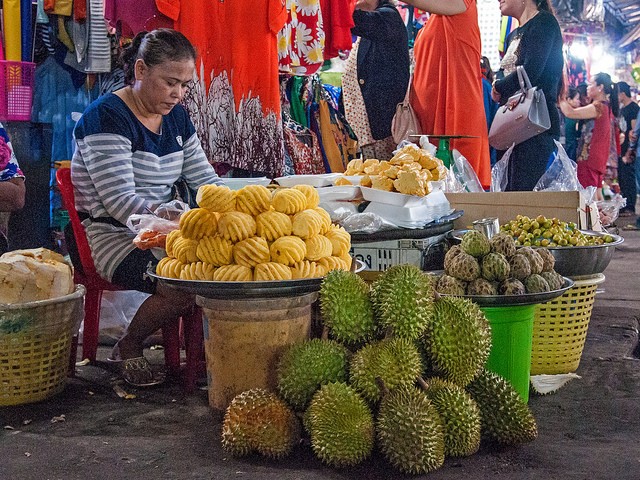 Customs and Cuisine of Cambodia

Cambodia is the smallest country in southeastern Asia. It borders Thailand, Vietnam and Laos and has a population of about 14 million. The term Khmer refers to the Cambodian people, culture and language. Cambodia was a French protectorate from 1863 to 1953.

The indigenous Cambodian religion is Buddhism. Hinduism, Islam and spirit worship are also practiced. Cambodians value tradition and have richly developed arts and crafts. They consider the Cambodian classic and highly stylized dance as an art form. They practice Khmer martial arts, which are over 1,000 years old. Many use holistic forms of naturopathic medicine.

Cambodia is one of the poorest countries in Asia and many people live on less than $1.20 per day. Thirty-seven percent of children suffer from chronic malnutrition. The effects of the disastrous Khmer Rouge control of the country, with decades of genocide and war, still plague the country and can be seen in the continued lack of education and skills in many areas.

The country is bordered by mountains inland and by the Gulf of Thailand on the southern coast. It has a fertile central basin and there are many lakes and rivers.

Rice agriculture produces the country’s main food staple. The Cambodian verb “sii bay” means “to eat,” but literally translates to “to eat rice.” Fish, both fresh and dried, provides 70 percent of the protein intake. Fresh fish is often served grilled with various sauces. The fermented fish sauce “Prahok” has a strong odor and is the essential flavoring for many Cambodian dishes.

The culinary style has been influenced by close neighboring countries, including Thailand, Vietnam and Laos.

Breakfast often consists of rice porridge or noodles. Lunch and dinners will feature spiced broth with meat or fish. These soups include hot and sour fish soup and fish soup with coconut and pineapple. Complex stir-fries of chicken and beef or pork and highly seasoned curries are also popular. Multiple elaborate dishes are served for festivals.

Desserts are often fresh tropical fruits: coconut, banana, mangos, pineapple and the strong smelling durian. Some consider the aroma of this fruit to be so offensive that it is banned in many public places due to the lingering odor. Still, it remains a popular treat for the sweet flesh found inside the thorn covered exterior.

Tea is the most popular drink, although coffee is also popular. Ankor beer is national favorite and wine is made from sugar palm or rice. Buddhists and Muslims typically refrain from alcohol.

Street food is a major industry and offers a huge variety of snacks and dishes. Fried noodles, beetles, snakes and sticky rice can be found.


Meals are served communal style with multiple dishes set in the middle of the table to share. Food is served as the dishes are cooked rather than in any set courses. Adult males and guests eat first followed by others according to status. The food preparers typically eat last. It is considered poor etiquette to finish everything on the plate. It is also bad manners to leave chopsticks sticking up out of your bowl.

“Cultures of the World, Cambodia” by Sean Sheehan & Barbara Cooke