Customs and Cuisine of Malawi
← Return to Project 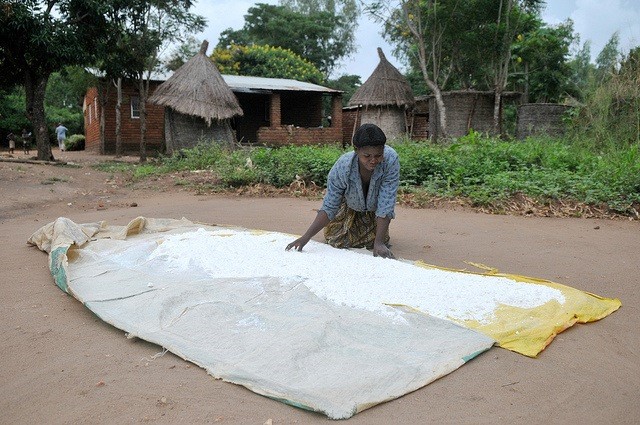 
Located in southeast Africa, Malawi is affectionately known as “The Warm Heart of Africa.” It shares its borders with Zambia, Tanzania and Mozambique. The major topographic feature is Lake Malawi, a freshwater lake that is home to hundreds of species of fish.

Maize is one of Malawi’s most important crops. After harvest, maize is typically ground up into flour, which is then used to make Malawi’s most popular dish, nsima, a thickly-mashed maize porridge dish so relied upon by Malawians that it is not uncommon to see people eating variations of it for breakfast, lunch, and dinner. It is eaten with the hands and used to scoop the side dishes of vegetables and meats, called relishes.

Relish, known locally as ndiwo, is mostly added just for flavoring, with the starch always being the bulk of the meal. In the poorer regions of Malawi, the relish is usually comprised of only vegetables (typically cassava leaves, sweet potato leaves, bean leaves, pumpkin leaves, cabbage, mustard leaves, rape leaves, or kale leaves), but in the wealthier areas, meat is used (goat meat is popular).

Lake Malawi is the third largest lake in Africa and is abundant with fish.  The main types of fish are chambo, a large white fish (and an AGE Africa staff favorite!), Usipa, a sardine-like fish and Mpasa, a salmon-like fish. Meat, usually beef and goat, is made in stews and eaten with nsima (another staff favorite!).

For dessert, Malawians may enjoy the local plain doughnut, mandasi, and they frequently wash their meals down with tea. Tea is one of Malawi’s major crops, so it is consumed regularly. Malawian tea is thought to be some of the best in the world.

Weddings are very important to Malawians, as they bring together families in a tight bond for the rest of the couple’s lives. After informing family members and local chiefs of the upcoming nuptials, the families gather at the home of the bride-to-be to meet each other and make the engagement official. Villagers who live near the bride-to-be’s family host two large celebrations, one the night before the announcement with plenty of food and drink; and the second on the day of the engagement which includes a ceremonial exchange of chickens. The bride’s family receives a cockerel and the groom’s family a hen, symbolizing a union between the families.

During the celebration, there are tests of the new family members. An uncle representing the bride’s side of the family is presented with a lineup that includes the groom and a few of his friends. The uncle has to show that he knows the man by choosing correctly. However, the groom must pick his own wife-to-be from a line-up of female family members who are dressed in traditional Malawian zitenje (colorful cloth) dresses. He better guess correct or face the jeering and laughter of her aunts and his mother-in-law!

The three major national holidays are Independence Day, July 6, Republic Day, July 6, and Constitution Day, May 18. Independence Day celebrates the end of the British colonial status in 1964, Republic Day commemorates the formal Declaration of the Republic in 1966, and Constitution Day celebrates the drafting of the first constitution as a democratic society in 1995. Mother’s Day, October 16, is also very important to Malawians, being designated a national holiday.