Customs and Cuisine of Togo
← Return to Project

Customs and Cuisine of Togo 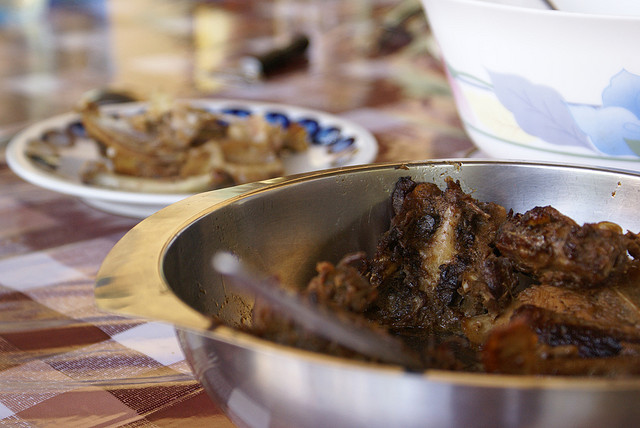 Customs and Cuisine of Togo


Among the smallest countries in Africa, Togo occupies a narrow strip of land flanking the Gulf of Guinea. The southern third of the nation is ideal for agriculture and growing crops such as coffee, cocoa and maize. Fusing deeply rooted local traditions with both French and German colonial influences, Togolese cuisine is considered one of the finest and most unique on the continent.

Maize is a key component of meals in Togo. In fact, there’s an ancient Togolese proverb that says, “Do not roast all your corn in the winter.” Maize is by far the most common starch found in meals, but other sources of starch include yams, cassava, plantains and rice.

The Togolese typically consume two to three meals per day, each consisting of a starch and a source of protein. Breakfast in Togo may consist of fried eggs, various cereals or sliced avocado. Breakfast is always accompanied by tea, coffee, or Milo, an Ovaltine-like powdered drink manufactured by Nestle. During midday and evening meals, one can enjoy meals rich in flavor that include spiced chili sauces, peanut paste and palm oil. Chili sauces are often made with tomato paste, oil and onions, and can even incorporate dried fish. Fish is a readily available source of protein due to the country’s location along the Atlantic. Togolese dishes often combine a variety of vegetables such as spinach and okra, which are grown in the country’s fertile farmland.

A staple of Togo’s cuisine and culture is fufu. Fufu is a traditional dish made from boiled yams, which are mashed into a dough and served with a variety of sauces and side dishes. Pates, another culinary staple of Togo, are made from maize floor or cassava and are also served with sauces made from vegetables or meats. Togo is also home to delicious fruits. Mango trees are common and pineapple is in season year round. Foreign foods such as baguettes and German beers are commonly found in urban areas of Togo as well.


Table manners in Togo are similar to those of neighboring Western African countries. Most meals are eaten without the use of utensils and are placed in a large communal bowl. The left hand in Togo is considered dirty and indecent; as such, all meals eaten without utensils are to be eaten with the right hand only. This notion even extends to the preparation of meals. Women who are cooking will never use their left hand while handling food.

The Togolese make for generous dinner hosts and take great pride in entertaining guests. It is expected that a guest will treat the meal they receive with gratitude and appreciation. Avoid asking what a meal contains or smelling it before eating, as this is considered insulting to the host. A modest burp at the end of the meal is viewed as polite and a sign of satisfaction. Meals in Togo often continue even after eating has ceased, as they are highly social in nature.


Togolese people hold interpersonal relationships, presentation and first impressions in very high regard. Looking sharp when going out each day is important. Many people will adorn colorfully patterned pagne, dresses and two-piece outfits called complets. It’s not uncommon for family members to wear matching clothing, either. The Togolese insist on greeting each and every person they come across on the street with a simple “good morning!” With individuals with whom they’re more personally familiar, people will ask a number of questions ranging from “how is your family?” to the more abstract “how is your patience today?”