Customs & Cuisine of Bangladesh | Speak Up for the Poor 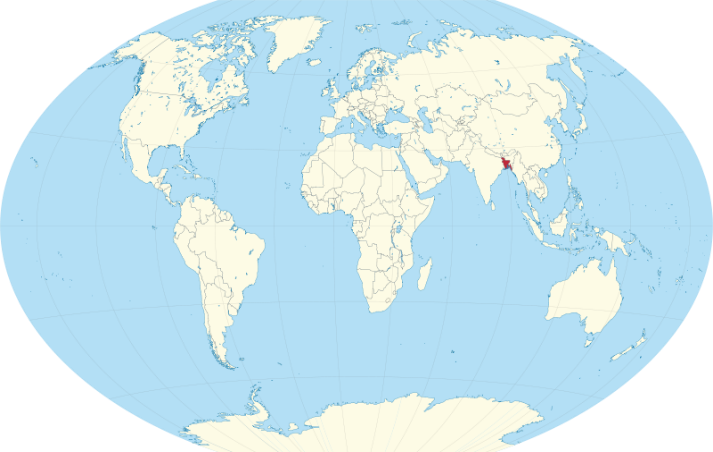 Customs and Cuisine of Bangladesh

Location: The People’s Republic of Bangladesh (Bangladesh) is located in Southern Asia between India and Myanmar with the Bay of Bengal on its Southern border.

Name Origins: The word “Desh” is of Sanskrit origin and means land or country. Bangladesh is thus the land/country of the Bangla (the people of Bengal). The origin of the name “Bangla” itself is uncertain. Some hypothesize that it derives from Vanga an ancient kingdom that was located in the Bengal region.

Population: Estimates from July 2020 indicate that Bangladesh is the 8th most populous country in the world with a population of 162.6 million people.

Religion: Bangladesh is a secular country; however, Islam is recognized as “religion of the Republic.” According to 2013 estimates, 89.1 percent of the population identify as Muslim while 10 percent identify as Hindu.

Language: Bengali (also known as Bangla) is spoken by 98.8 percent of the population.

Bangladesh is the one of the few countries in the world that was expressly carved out on the basis of a national language and ethnicity. Bangladesh was formerly a part of the then Indian subcontinent. When the Indian subcontinent gained independence from British rule on August 15, 1947, the region corresponding to Pakistan and Bangladesh was partitioned from the region now known as India on the basis of religious differences. The Muslim majority regions of what is now Pakistan and the Muslim majority region of Bangladesh were partitioned from Hindu-majority India. Bangladesh was then known as East Pakistan and was under the Dominion of Pakistan.

When Pakistan declared Urdu and only Urdu to be recognized as the national language, a movement arose in East Pakistan (Bangladesh) to have Bengali be recognized as its national language. Pakistan launched a planned military incursion, “Operation Searchlight,” in response to the rise of Bengali Nationalist sentiment targeting nationalist Bengali civilians, students, intelligentsia, religious minorities, and armed personnel. The results of the East Pakistan (Bangladesh) elections held were deemed invalid and the Prime Minister was arrested. While there is some lack of consensus on whether what followed was a genocide, between 200,000 to 500,000 Bangladeshi were killed and over 30 million internally displaced. A nine-month long war, the Bangladesh War for Liberation between the Pakistan military and the Mukti Bahini (Freedom Fighters of Bengal) began in March 1971 with India intervening in the conflict in November. The war would end on December 16, 1971, with East Pakistan gaining independence from Pakistan and forming the new nation of Bangladesh.

Bangladesh is predominantly rural with over 65 percent of Bangladeshi living in rural settlements. As the 10th most densely populated country in the world, land is scarce and securing land tenure and property rights is both a contentious and critical resource issue.

Bangladeshis are very family/community oriented in keeping with the collectivistic nature of the society. One’s identity is very much tied to the identity of one’s village and family. The social structure is hierarchical with those in positions of power and those of advanced age being at the top of the hierarchy. The elders are considered wise and deserving of respect.

The family is the primary and central unit to social life, with the patriarch being the head of the household. Traditionally the most common household unit was the “barhi,” consisting of the husband and wife, their unmarried children and married sons with their wives and children. In present times, more families are choosing to have their own nuclear units, but even in these instances, deference is given to inputs from the oldest male patriarch when making either big life or financial decisions. Even with the increase in nuclear families, the extended family remains the norm.

As is with a lot of patriarchal, patrilineal societies around the world, the role people play in their everyday lives in Bangladesh are determined by their gender. Women are expected to manage the household and the children, while men are expected to be the breadwinners. These norms are changing but slowly. While women are more visible in the economic sphere, men still have greater ease and access to education as well as employment.

Marriages are arranged by parents with a suitable “match” when the child is considered to be of marriageable age. A match is deemed suitable when s/he belongs to the same religion, social strata, economic means, and level of education. Sometimes friends, family members, or even a professional matchmaker are employed in the process of seeking a suitable match. There is considerable stigma attached to divorce, so couples tend to stay married even if there is incompatibility, or worse, abuse.

Bangladeshi cuisine has a lot of similarities with cuisine of the Indian subcontinent along with strong Persian influences of Mughlai cuisine. As with Mughlai cuisine, Bangladeshi cuisine has rich, creamy curries known as “korma” and uses a lot of the same fragrant spices and aromatics.  While it shares a border and a history with West Bengal (the state in India), their cuisine differs in one very important aspect. Hindu-majority West Bengal is predominantly vegetarian while Muslim-majority Bangladesh is not. Bangladeshi cuisine observes halal as is Muslim tradition but permits eating meat (pork and all products from pigs are prohibited) and seafood. Fresh vegetables that are in season are often incorporated in meat dishes.

Bangladesh is known as the land of six seasons: summer, monsoon, autumn, late autumn, winter and spring. Each season has a certain shift in what dishes are typically eaten. Mustard oil is traditionally the oil of choice used in Bangladeshi cooking, and the Bangladeshi “panch phoron” (five spice) mixture of mustard, fennel, fenugreek, cumin, and nigella seeds is a quintessential spice mix used in many dishes.

A typical breakfast might be luchi (fried puffy bread) with sabzi (mixed vegetable) and lentils or omllettes. Cha (chai) is the beverage of choice. A breakfast dish that is found in the rural regions of Bangladesh is “Panta bhat,” rice leftover from dinner is soaked in water overnight and allowed to ferment. It is eaten in the morning as a savory porridge seasoned with onion, diced green chilies, and salt. A hearty dish, it is consumed especially in the summer as is it believed to “cool” one’s body down.

A typical lunch would be rice, fish/meat curry or lentils and vegetables. Dinner is likewise. Hilsa (or ilish) curry is the national dish of Bangladesh. The Hilsa fish, an abundantly available and inexpensive fish, is marinated in a mixture of turmeric and chili paste and then pan fried before being added to a mustard gravy. With the Hilsa fish and with other kinds, Bangladeshi cuisine utilizes every part of the fish, head, tail, eggs, etc. Another signature Bangladeshi dish is Dhokar Dalna, in which fried lentil cakes (Dhokar) are simmered in a tomato and potato gravy that traditionally does not use onions or garlic.

Cha (chai) Nasta (snacks) is a Bangladeshi midafternoon/early evening tradition that is equivalent to the British high tea ritual. Snacks, sweet and savory, usually fried, such as fritters made with onions (peyaji) or with eggplant (beguni), are had over chai and conversation. Singara are like Indian samosas, the spiced potato and vegetable stuffed puff pastry. Bangladeshi samosas, on the other hand are filled with cabbage and other vegetables and where the Singara crust is flaky, the Bangladeshi samosa crust is crispy.

A fair number of Bangladeshis desserts are dairy based. Some of the most popular desserts are Ras Malai, sweetened balls of paneer (homemade cheese akin to ricotta salata) flavored with cardamom extract in clotted cream, shir-e-faluda a vermicelli pudding similar to rice pudding with honey and nuts, shirberanj a sweetened rice seasoned with spices and rosewater and Mishti doi, a fermented sweet yogurt. The Mishti doi is typically made in earthenware because the gradual evaporation of water thickens the yogurt and provides the right temperature for the growth of the culture.

THE BANGLADESHI WAY OF LIFE

If one word had to be chosen to describe the Bangladeshi way of life it would be “harmony.” It is said that harmony is the underpinning characteristic of rural living in the community-oriented society that is life in Bangladesh. The concept of harmonious living extends to individual interactions. Children are frequently reminded to “manush hou” which literally translates to “be human,” but more accurately means “be humane” or be mindful of one another’s humanity. It is an admonition to see past differences in each other.

The traditional Bangladeshi greeting among Muslims is “Assalam Waleykum” (peace be with you) to which the response is “Waleykum Assalam” (and with you). The Hindus usually greet each other with “Nomoshkar” accompanied by the Anjali mudra (hands clasps together in prayer pose placed beneath the chin). While men may shake hands, the grasp is not meant to be firm as a firm handshake indicates aggression. To show respect, one might place the right hand over the heart and bow the head after shaking hands. Farewell is bid with the greeting “Khoda Hafez,” which translates to “May God be your guardian.”