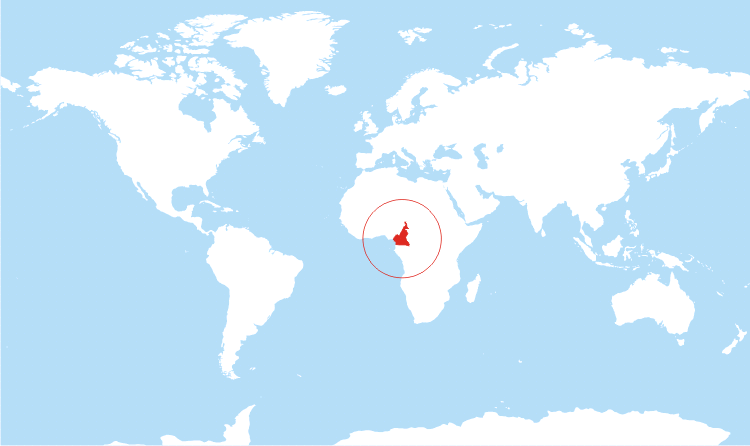 Customs and Cuisine of Cameroon

Location: The Republic of Cameroon is located at the junction of Western and Central Africa. It is between Nigeria to the west, Chad and the Central African Republic to the east, and the People’s Republic of Congo, Equatorial Guinea, and Gabon to the south.

Name Origins: The origin of the name of the country is traced back to when the Wouri River was dubbed “Rios dos Camaroes (“River of Prawns”) by Portuguese explorers.

Religion: The dominant religion practiced in the nation is Christianity. Per 2018 estimates, about 38.3 percent of the population identify as Roman Catholics, 25.5 percent as Protestant and 6.9 percent as belonging to other Christian factions. Those practicing the Muslim faith constitute 24.4 percent. Only 2.2 percent identify as Animists.

Cameroon has been variously referred to as “Africa in miniature” and “Africa’s crossroads” on account of its geographical and cultural diversity. Cameroon is home to both white sand beaches and mountains, active volcanoes, and savanna grassland. Its climate and vegetation are a sampling of all the major climates and vegetation of Africa.

Cameroon has at various points in its history been a colony of Portugal, Germany, France, and Britain. In 1520, the Portuguese established sugar plantations and subsequently, the slave trade. In 1884, Germany colonized parts of Cameroon, renaming it Kamerun. These territories that were under German control would expand in 1991 when France ceded its territory to Germany. At the end of World War I, however, Germany was forced to surrender regions of Cameroon under its control to British and French troops and the regions were partitioned between France and Britain. The regions that were surrendered to France were granted self-government in 1958 and later, independence in 1961 with Ahmadou Ahidjo seated as President. That same year, 1961, a referendum passed by Britain divided its Cameroonian territory between Cameroon and Nigeria. This set off an insurrection that was quelled in 1963 with aid from French forces. In 1982, then Prime Minister Paul Biya would ascend to the Presidency where he remains to date earning him the dubious distinction of being the longest-ruling non-royal leader in the world.

Cameroon has one of the highest literacy rates in Africa but its history of being under the same ineffectual leadership since 1982 has greatly hampered economic progress and stability. Under Biya’s authoritarian and violent rule, Cameroon has grown increasingly corrupt, earning Transparency International’s ranking as “the world’s corruption champion” both in 1998 and 1999. Freedom House, an organization that rates nations based on how democratic their processes are, labelled Cameroon as “not free.” Cameroon earned an overall score of 22 out of 100 (100 being entirely free), placing it 174th out of 210 countries measured.

Per the United Nations World Food Programme, in 2017 Cameroon had a population of 20 million inhabitants, 40 percent of whom lived below the poverty line. In rural areas this increases to 55 percent of the population.

Since 2014, Cameroon has faced increased attacks from the jihadist group Boko Haram. According to Human Rights Watch, more than 322,000 people have had to flee from their homes since 2014. Reports suggest that the number of Boko Haram attacks against civilians in Cameroon in 2020 was higher than those in Nigeria, Niger, and Chad combined.

The people of Cameroon come from a diverse population of about 250 recorded ethnic groups. Broadly categorized into five regional/cultural groups: 1. the western highlanders who inhabit the northwest, 2. coastal tropical forest dwellers originating from the southwest, 3. southern tropical forest dwellers, 4. Muslims of the northern semi-arid regions and central highlands, and 5. the Kirdi, from the northern desert and central highlands.

Cameroonian ethos is very much that of a collectivistic society. The family is the locus of Cameroonian social life and the means to achieve social standing. One’s obligation and responsibilities to one’s family remains top priority. Family refers to parents, children, grandparents, aunts, uncles, and cousins who might cohabit as one big extended family. While this was the norm traditionally, lately, those among the younger generation who have the financial ability to live by themselves are choosing to live as nuclear families. Meals are often had together as the extended family with the eldest in the family being served first. Elders are treated with a great deal of reverence and often get the final say in decisions concerning the family. Teenagers are considered children and do not earn the sort of independence that teenagers in countries such as the United States are accustomed to. In their senior years, the elders are cared for by the younger members of the family. Retirement homes and senior living are nonexistent.

Even in the two-income families, the male is the head of the household and the adult vested with financial authority. It is considered acceptable for the male adult to make decisions unilaterally while females are required to confer with the other adults before making decisions that concern the family. Sibling children typically share a bed and most other things like clothes, jewelry, etc. Similar to other cultures where allegiance to family reigns supreme, nepotism is not considered improper but rather the way one supports one’s network of family and friends. It is also seen as a way to ensure one works with those whom one knows and trusts.

Much like its topography and its people, the cuisine of Cameroon is also known to be one of the most diverse in the continent. This diversity in cuisine is in fact a function of the diversity of its people, its location, and its history. The cuisine is predominantly African but peppered with German, French, and British influences.

Staple foods are region dependent. However, some ingredients such as corn, millet, cassava, groundnuts (peanuts), potatoes, plantains, yams, and rice form the foundation of dishes prepared and consumed all over the country. Fufu, a dish found in many African nations, is common throughout Cameroon as well. A paste like dish prepared by boiling ground grain flour (ground corn, millet, cassava, or rice) and then cooled, Fufu is part main dish/part vehicle for the stewed proteins or vegetables. In the Southern regions of Cameroon, bushmeat (such as meat from porcupines, monkeys, or snakes) is consumed while in the northern regions, the animal-based proteins are usually beef, lamb, goat, and chicken. In the coastal regions, seafood features heavily at meals. It is prepared grilled, fried, or steamed in banana leaves. The proteins are usually served with Fufu and with corn, yams, beans, or plantains.

Known as groundnuts in Africa, peanuts are found in abundance in Cameroon and used in many dishes – in the sauce for proteins or stewed with greens and vegetables or even in desserts and bread. Ground peanuts spread on warm baguette or croissant is a very quintessential Cameroonian treat.

THE CAMEROONIAN WAY OF LIFE

Cameroonians are very community-oriented and ties to family and friends are long and fiercely maintained. The community hierarchy is based on age and elders are treated with respect and reverence. As a sign of respect, men lower their head and avert their eyes when greeting someone who is older or a superior. When greeting another, women are expected to not maintain eye contact, even if the person they are greeting is also female. It is customary for men of the Muslim faith to not shake hands with women. While some traditions vary between the Francophone and Anglophone regions of Cameroon, shaking hands is the preferred way of greeting among men. In the Francophone regions, embracing and blowing air kisses while cheek to cheek is how close friends are greeted. In the Anglophone regions, close friends do not merely shake hands but use a special handshake, where when pulling their hands back they snap the middle finger to the thumb. Greetings in Cameroon are never perfunctory, but a thoughtful inquiry into one’s family and a discussion of current affairs is expected.

Being well dressed when visiting someone is considered a sign of respect toward the hosts. At any gathering one is expected to shake the hand of every guest, starting with the elder among the group. At dinner gatherings, men are served first followed by women and children. Traditionally food is served communal style, and everyone washes their hands and serves themselves from the communal bowl of food.

Despite the many challenges that the average Cameroonian faces, they are known to be hospitable and generous to visitors and guests. Their family-first focus and the extended family structure makes for a community who are extremely welcoming and follow an open-door policy towards all.