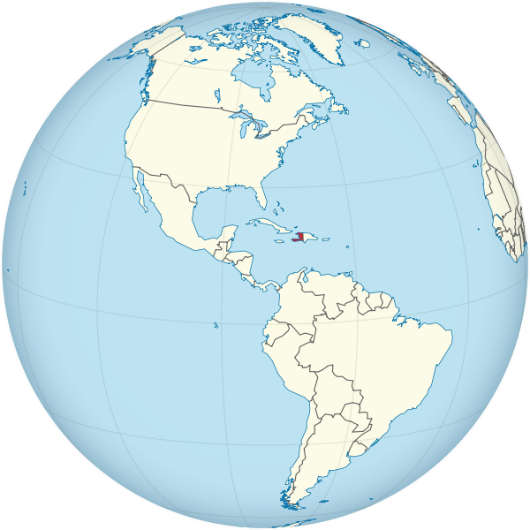 Name Origins: Derived from the Arawak word “Ayati,” Haiti means “land of tall mountains.”  Arawak was the language of the Taino Indians, the original inhabitants of the island prior to colonization. As its name indicates, Haiti is, in fact, the most mountainous of the Caribbean countries. About two-thirds of the total land area is above 1,600 feet in elevation.

Anglicized pronunciations for Haiti include HIGH-ti, high-EE-ti and haa-EE-ti but HAY-ti is by far the most common.

Population: The population estimate for July 2020 was 11 million, an estimate that takes into account mortality from AIDS. Close to 95 percent of the population self-identifies as Black, tracing their origin to Africa. The remaining 5 percent are of mixed European and African descent.

Religion: The constitution of Haiti allows for religious freedom, and the country does not have an official religion. However, most of its people follow Christianity. A little over half (55 percent) of those who follow Christianity are of the Roman Catholic faith and a little over a quarter (29 percent) are Protestant. An interesting difference between the two sects are that some Haitian Roman Catholics consider Vodou (Voodoo) to be compatible with Christianity and practice it, while most of the Protestants do not.

Language:  Kweyol or Kreyol (Haitian Creole) and French are the official languages. Most Haitians speak Creole in social settings but reserve French for work and for school. The vocabulary of Kreyol derives close to 90 percent from French, with influences from Taino, Spanish, Portuguese, and West African languages.

Named La Española and under Spanish rule until the early 17th century, Haiti was ceded to France in 1697. The country was renamed Saint-Domingue by the French and enslaved people were brought from Africa to work on the sugarcane plantations. The Haitian Revolution (1791-1804) lead to the abolition of slavery, and Haiti was established as the first independent nation in Latin America and the Caribbean on Jan. 1, 1804.

On Jan. 12, 2010, Haiti was struck by a magnitude 7.0 earthquake, and between Jan. 12 and 24, approximately 52 aftershocks measuring 4.5 or greater were recorded. This catastrophic event left (depending on different sources) 80,000 – 316,000 dead and close to 1.5 million displaced. It is estimated that almost 80 percent of rural housing was severely affected, creating hundreds of thousands of newly homeless people who were forced to live in informal settlements, known variously as “tent cities,” “slums,” or “shantytowns.” Public service institutions such as schools, hospitals, and government buildings suffered severe damage in many parts of the country including the capital city, Port-au-Prince. Farming infrastructure and crops were destroyed as well.

On the heels of the earthquake, even before recovery efforts were well underway, Haiti was dealt another blow: the worst cholera epidemic in recent history. This cholera epidemic would kill thousands more and prevent any meaningful recovery.

Today, Haiti has the dubious distinction of being the poorest country in the Western Hemisphere. Over 60 percent of the population lives below the national poverty line and 40 percent are unemployed. Most Haitians living in the capital city of Port-au-Prince reside in informal settlements, the largest of which is Cité Soleil. Home to hundreds of thousands, Cité Soleil is situated on marshlands by the sea and is prone to flooding, which makes life there all the more tenuous.

While Haiti’s population grew rapidly after 1900, the life expectancy of its people did not. It remains among the lowest in the world.

In the Haitian lingo, the people of the world are broadly categorized as belonging to two groups: Haitians and “blanc.” The literal translation of the French term “blanc” means white. When used by the Haitians, “blanc” refers not to White people or people of Caucasian descent but to a foreigner, i.e., anyone who is not Haitian. While used mostly endearingly, “blanc” can be used to denote cluelessness (of Haitian culture) in a teasing manner.

The class system in Haiti is based on wealth and income, the nature of one’s employment, and the level of formal education acquired. In addition, social connections are a key factor.

Immigrant Haitians of Middle Eastern descent are referred to “Grimmel” (light skinned) and form the middle class in Haiti. They are typically the group of Haitians who have business interests and land investments. Haitians who live abroad and continue to send money back to members of their family who still reside in Haiti are also considered a part of this more privileged class.

Haitian women are an important part of the local economy through their contributions to agriculture and to small scale commerce. Haitian women comprise the majority of street vendors selling food and handicrafts. USAID records women as being head of households in close to half of Haitian households. However, the status of women and the female child does not reflect the important roles they play. They continue to be regarded as and treated as less than their male counterparts and gender inequality and gender-based violence are pervasive. While women play the dominant role in the informal economy, men play the dominant role in the formal economy.

The prevalence of poverty and high cost of providing for and educating children has led to a form of modern-day child slavery in Haiti known as “restavek.”  In the Haitian Creole language, “restavek” means “to stay with.” As a practice, restavek involves the transaction whereby a child born into a poor rural family is given to a wealthier relative or stranger. The agreement being that the child would stay with the wealthier family and work as their domestic help in exchange for being provided with food, shelter, and most importantly, access to education. In reality, this has led to a system of unpaid child labor and oftentimes, child abuse.

The national dish is riz collé aux pois, a dish of white rice with red kidney or pinto beans with a sweet glaze marinade, often served with red snapper, tomatoes, and onions. Rice is frequently served with a meat stew known as “bouillon.” Beef Bouillon (or goat bouillon, etc.) is made differently in different parts of the country but usually involves a stew of the meat with tomatoes, potatoes, and spices. One variation of Beef Bouillon involves stewing the beef with plantains and dumplings. Another “sauce” served with rice is sauce pois, a puree of black, red, or white beans.

Corn is a major staple in Haiti and a corn grits-like dish known as Mais Moulin is served for breakfast with eggs or fish and avocados. Mais Moulin is sometimes served with black beans mixed in. A hearty protein and carb dish, a big bowl is considered the ideal meal for farmers starting off their workday. Any available vegetables cooked into a thick stew with spices, garlic, and tomatoes is known as Légume Haïtien and is served with rice, millet, mais moulin, or yam.

THE HAITIAN WAY OF LIFE

Haitians consider the way one is attired and a personable manner as both important and an indicator of one’s station. Traditional clothing has given way to western style clothing in the cities. Haitian women in rural areas may wear a head scarf or head wrap.

Relationships, especially that of family, are very important in Haitian culture. Poverty makes for having to make hard decisions, and when confronted with the choice of being able to do something for oneself versus one’s child, Haitian parents invariably choose the child. Resvatek is especially heartbreaking because of how it arose from a desire to have a better life for one’s child, a better life than the parent could provide. Extended family is an integral part of the Haitian way of life and kin groups serve as support networks.

Haitians are passionate people who do not shy away from showing their emotions. Be it through music, song, dance, or just conversation, they are very expressive. It is because of their easy display of emotion that Blanc can sometimes read Haitians as aggressive or confrontational. Public displays of affection are, however, quite subdued and kept to what is considered “respectable.” Men greet each other by shaking hands and hugging, while women greet each other with kisses on the cheek. Haitians expect exchange of greetings and pleasantries and the proper taking of leave.

Dancing is a way of life in Haiti, and the music of Haiti draws upon Caribbean, French, African, and Spanish influences. It is an important component of Haitian festivals, carnivals, and social engagements such as weddings, as well as religious observances both in church and vodou.

Carnivals and festivals are a huge way of observing and showcasing Haitian culture and its ancestral traditions. The biggest of these festivals is the annual Carnival observed every year on Shrove Tuesday in the capital city of Port-au-Prince. The carnival features elaborate floats, music, and dancing in the streets. Throughout the season of Lent, Rara festivals are held with processions set to the sound of traditional Haitian instruments and Creole singing. Every July, the Carnaval des Fleurs takes place in Port-au-Prince. Spread over three days, this festival highlights Haiti’s native flora with musical performances and dancing. Haiti’s equivalent of the “Day of the Dead” is known as Fet Gédé Vodou, and it is a celebration of those near and dear ones who have passed on. Rum is Haiti’s most popular export and it is celebrated in November during the annual Festival du Rhum. Haiti celebrates its Independence Day on Jan. 1 with street parades and feasting as well.

Football (soccer in the USA) is the most popular sport in Haiti. So popular in fact that most jest that it is the only sport in Haiti. Whether the local clubs or the national teams, football is treated with seriousness and passion. The Haitian National team has been a member of FIFA since 1934 and was only the second Caribbean team to make it to the World Cup championship in 1974.

What Do Migrants Miss Most About Haitian Culture When They Move Abroad?