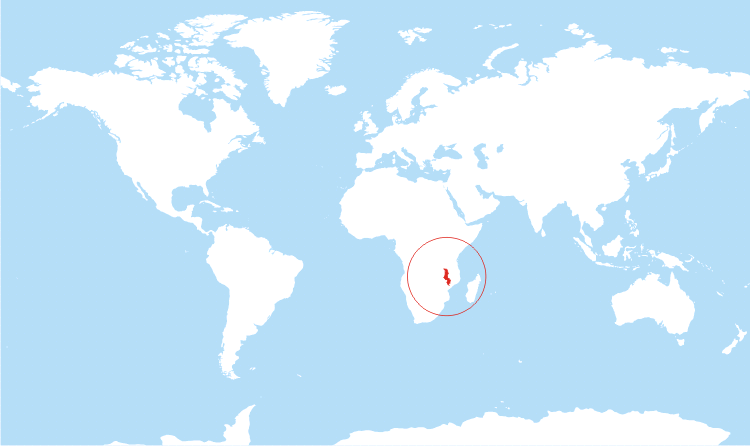 The “Warm Heart of Africa,” The Republic of Malawi is a landlocked country in South East Africa bordered by Zambia on the northwest, Tanzania to the Northeast, and Mozambique to the East, South, and West. Since 1981 when Malawi was established as a British Protectorate, it was known as Nyasaland, possibly after the famed Lake Nyasa. Malawi came to be an independent nation in 1964. The name Malawi is thought to have been derived from the word Maravi, which translates to “flames,” and harkens to The Amaravi, ironworkers who would later come to be known as Chewa and migrate to the land that would become Malawi.

Lake Nyasa, also known as Lake Malawi, covers 11,430 square miles. As home to more species of fish than any other lake in the world, the lake remains one of Malawi’s most famous natural features. Lake Malawi is the ninth largest lake in the world and the third largest in the continent after Lakes Victoria and Tanganyika. David Livingstone is said to have described the lake as the
“Lake of Stars,” the stars here in question being the lanterns on the bows of the thousands of fishing boats that dot the waterscape at night.

Malawi is generally thought of as comprising four regions corresponding to four topographical features: The Great Rift Valley, the central plateaus, the highlands, and the mountains. The Great Rift Valley contains Lake Malawi and the Shire River valley. The central plateaus are located to the west of Lake Malawi and reach elevations of about 2,500 – 4,500 feet. The highlands include the Nyika, Viphya, Dowa highlands, the Dedza-Kirk mountain ranges, and the Shire Highlands. The mountainous ranges of the Mulanje and Zomba form the fourth region of Malawi.

Malawi’s population is predominantly rural. The urban population is clustered in three main cities: Lilongwe, the capital city, Blantyre the commercial center, and Mzuzu. Blantyre has an interesting history, having been founded by Scottish settlers in 1876 and named after Blantyre in South Lanarkshire, Scotland, birthplace of David Livingstone. The city is located on the Shire Highlands at an altitude of about 3,409 feet, making it cooler and the terrain is reminiscent of the Scottish Highlands.

The Malawians of today are historically linked to ten major ethnic groups: the Chewa, Nyanja, Lomwe, Yao, Tumbuka, Sena, Tonga, Ngoni, Ngonde, and the Lambya/Nyiha. The two dominant groups are the Chewa representing 34.3 percent of the population and the Lomwe representing 18.8 percent. The July 2018 estimate for the population of Malawi is 19.8 million. This estimate takes into account the many factors that affect population growth in the country: higher mortality rates due to prevalence of HIV/AIDS (estimates suggest close to 1 million living with HIV/AIDS in Malawi as of 2018), higher maternal and infant mortality rates, lower life expectancy, etc. The population is skewed younger due to the lower life expectancy with only 3 percent of the population being between the ages of 55 – 64 and only 2.7 percent of the population being age 65 and over. Malawi has lower population numbers than some of its neighboring countries, but it has a high population density with settlements clustered south of Lake Malawi and in the three major cities.

The people of Malawi are largely settled in rural areas, with only 17.25 percent of the total population being urban dwellers. Predominantly agrarian, almost 78 percent of its population are employed in the agricultural sector. Ranked among the poorest countries in the world, over half the Malawians live below the poverty line.

With close to 80 percent of Malawians being rural inhabitants, the village, known as the “mudzi,” is the primary unit of settlement. Extended families live in a mudzi, the number and size being limited by the availability of cultivable land and water close by. The traditional dwelling, round huts with mud walls and grass thatched roofs, are now being replaced by brick walled, corrugated metal roof houses. Seniors live with and are cared for by their children and grandchildren and command considerable respect within the household.

A traditionally patriarchal society, roles are gender-defined with men working outside the home and women within. With changing times, a larger number of women in the cites are joining the workforce, being entrepreneurial and even lobbying for positions in the legislature. In rural, largely traditional villages, the place of the woman remains behind the man of the house. Subservient (for instance, women often carry goods from the market following the men who walk ahead not carrying anything) and segregated (women eat in the kitchen while men dine at the tables), the status of women is decidedly that of being lesser than and dependent on men.

Marriages are arranged with the family of the bride offering the groom’s family a dowry of grains, livestock, or land to serve both as an incentive to choose the bride and a way to offset the costs of “taking on a dependent.” Polygamy is practiced but very rarely and is dictated by financial ability. Infants are carried by mothers on their backs at they go about their daily tasks. Children are raised by the female members of the family including older girls.

The Food of Malawi

Maize, beans, peas, peanuts, and tea are the dominant crops cultivated throughout the country followed by crops of cassava, bananas, pulses, sweet potatoes, and rice. Chickens, cattle, pigs, sheep, and goats are some of the livestock raised. Lake Malawi is an excellent source of fish such as chambo (tilapia-like fish), Usipa (akin to sardine), and Mpasa (similar to salmon). The fish are typically fried or grilled and served with rice or “Nsima” for lunch or dinner.

Maize is the staple grain and Nsima, a maize-based porridge that is formed into patties, is the staple at most meals. Cooked with water into a porridge-like consistency, the Nsima is scooped out of the dish with a wet, wooden spoon and plopped onto a cold plate. When the porridge congeals, golf ball sized pieces are torn off and formed into patties and a “dimple” pressed into its center. When the patties cool, they are used to scoop/dip with “Ndiwo.” Ndiwo is a greens or vegetable stew that is made by sautéing onions and tomatoes with one of the following: cassava leaves (Ntapasya or chigwada), sweet potato leaves (Ntoliro or Kholowa), bean leaves (Nkhwanya), pumpkin leaves (Mkhwani), Chinese cabbage, mustard leaves, kale leaves, or cabbage.

Most Malawians skip breakfast or have a very light, simple breakfast. Mgaiwa Phala is a breakfast porridge cooked using maize flour in milk with a little sugar sometimes served with a sprinkle of cinnamon. The same dish made with rice is known as Rice Phala, cooked using rice flour instead.

“Thobwa” known locally as “sweet beer” is, as its name suggests, a fermented, sweet drink made by slow fermentation of sorghum or millet. With a consistency akin to eggnog and a texture like thin grits, it is a popular drink in the summer.

“Zitimbuwa” are banana fritters that are made with a banana, corn flour, and spice batter and deep fried.

Fried insects are eaten as a protein rich snack, appetizer, or relish and a mainstay of street food. “Ana a Njuchi” are wild bee larvae that are dried, seasoned, and fried. Green bush crickets “bwamnoni” are boiled after their legs and wings are removed, dried, and then fried with salt and optionally, fat. Chippies are another popular street food, deep fried potato wedges served with a hot sauce, tsabola.

Malawi is Africa’s second largest producer of tea (after Kenya) and as such tea is an accompaniment to most meals.

The Malawi Way of Life

Poverty is a way of life in Malawi where half the population lives on less than a dollar a day. Agriculture is still non-mechanized in large parts of the country and working the fields involves hard manual labor. Handheld plows being used to till soils are not uncommon. Also, not uncommon is food insecurity. The vagaries of precipitation can often mean that crop yields can be uncertain and starving families resort to eating food normally considered inedible (water lily tubers for instance).

Despite these adverse living conditions, the Malawians are a generous, kind, and gregarious lot of people. The “warm heart of Africa” homage is well-earned as anecdotes abound of their altruism, of neighbors donating some of their “food money” to neighbors in need of money to pay for HIV or malaria medication, neighbors banding together to pay for fertilizer for a neighbor’s field etc. There is a prevailing spirit of cooperation and community well-being. This spirit is reflected in the sayings of the country: “Gold is a debt we can repay, but kindness not till our dying day” and “If you have, give, and if you need, seek.”