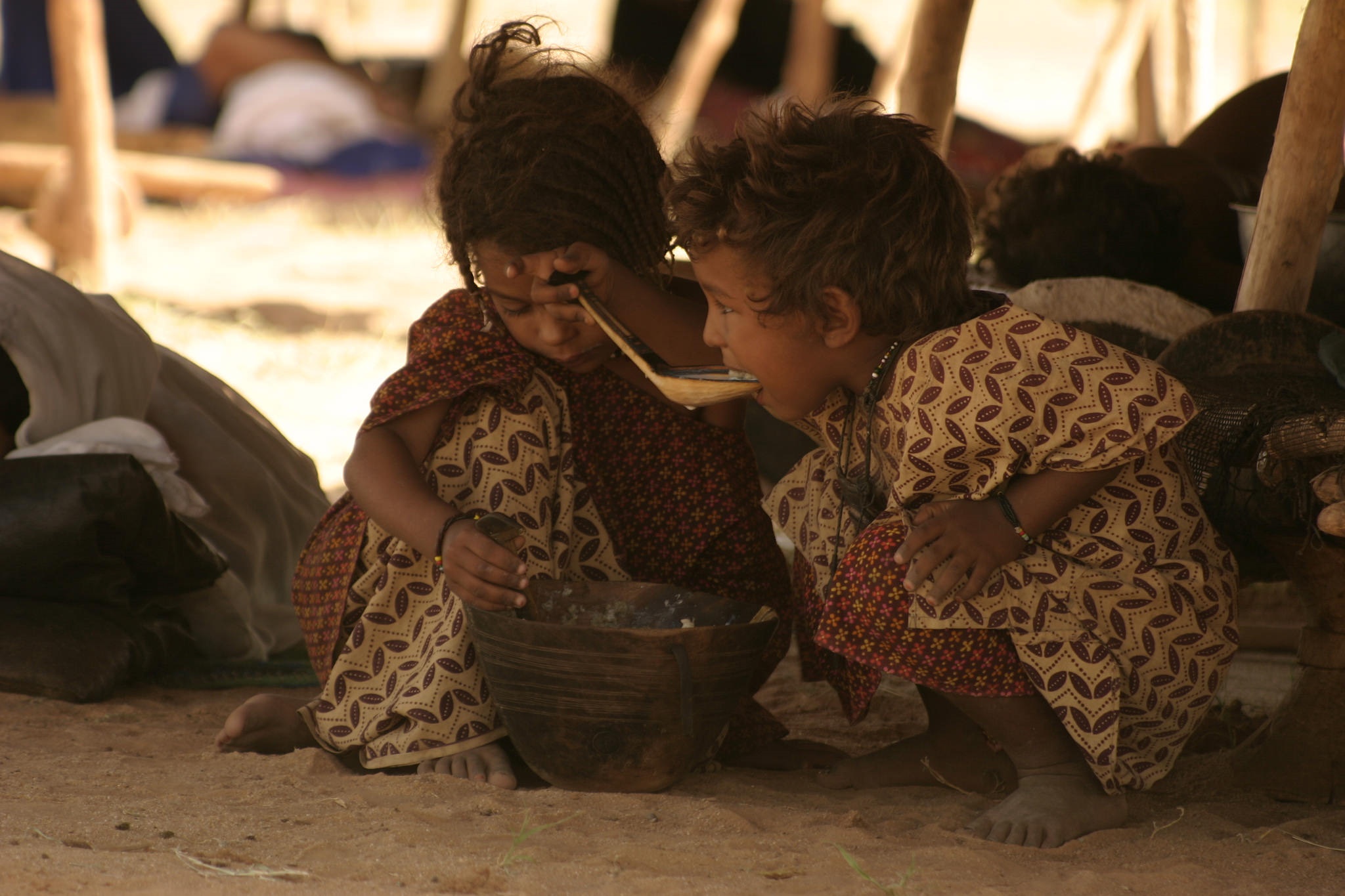 Customs and Cuisine of Niger


The types of food people of the Azawak consume are based on seasonal availability.  During the rainy season and harvest, animals produce more milk, which results in healthier (more protein rich) diets and more readily available food. During the cold and hot seasons, milk is scarcer, resulting in the need to purchase supplements such as powdered milk, macaroni, etc. Millet and sorghum are staple grains, which have been bought through trading with the southern farming groups (Hausa, Djerma) for centuries.

Women are very knowledgeable about traditional medicines, including the herbs, tree leaves and fruits/berries that must be consumed in order to prevent or heal various illnesses, ranging from malaria to indigestion. As the biodiversity in the zone is reduced due to climate change and overexploitation, however, these plants are becoming more scarce, resulting in greater dependence on Western medicines and imported foods for the family’s health and nutrition. Milk, once the main staple food for the Tuareg diet, has in turn been effected by the losses of biodiversity, as many of the most nutritious grasses and trees are not as available as in the past, resulting in the need to have many more cows or goats to produce the same amount of milk as did one healthy cow in years past. Because of this social-ecological relationship, the Tuareg’s livelihood has become highly dependent upon the market.

The Tuareg people are therefore not self-sufficient with their livestock production. Selling livestock allows families to purchase most household staples, which aside from grains like millet, include sugar, rice, beans, powdered milk, tea, oil and spices. When families have fewer livestock, they rely on remittances from migrants to Libya or other countries. During a normal day, household consumption consists of millet porridge (ilewa or arajira) for breakfast and lunch and ishink for dinner. Ishink can be any cooked meal, but most often ranges from millet paste and black sauce (based on available spices and leaves) to beans and rice. As the market has begun to dominate household food consumption, cheap imported food stuffs such as cookies, oil, Maggi and other items have become a part of household consumption patterns. Unfortunately, this change is not seen as supportive of household health and nutrition, but the lack of available healthy alternatives (gardens, milk) forces many households to accept these foods.

During festivities such as marriages, baptisms and Muslim holidays, meat is consumed in larger quantities and shared by all. This sharing aspect greatly supports community nutrition, as well as building solidarity between people. While meat is also consumed during other times of the year, it is quite rare, as killing one’s livestock is reserved for special occasions. Also, many Tuareg people consider their livestock as their children, and thus would not easily sell or kill their livestock for their own benefit.

True yams of West Africa (called nyams in Niger) are a starch and not at all sweet.  Yams are a staple in Niger and West Africa, sweet potatoes are not. Yams are usually pounded, dried and water added to make fist size dough balls. While eating, each person receives their own fist-sized ball. Using their right middle and ring finger they take a small piece of the fufu, dip it into sauce and eat it. The index finger is not used for eating, nor do any of the fingers go into the mouth. Culturally, everyone shares a bowl of stew, takes bites in tandem and eats from their side of the bowl until full. Portions are usually very generous if given individually. A cook will be greatly disappointed and embarrassed that they did not serve you enough if you finish your plate.

Yams, yucca and regular white potato are often sliced and fried as well.  In Niger and West Africa, spice mixtures (depending on the region) are served on the side to dip. Many times with Calve (mayonnaise). Spice mixes that are available in the U.S that can be used are Old Bay, Lawry’s or even Adobo. In Niger, spice mixtures vary greatly and can be quite hot. On occasion, many people also dip them in sugar for a treat as well.

To be specific about the Tuareg and in light of the holiday season, cheese, dates and melon slices with hot sugary black or green tea are very commonly served.

Tuaregs are nomadic and as such, meals are usually very simple to prepare unless there is a special occasion. Daily meals always consist of some dairy and millet gruel, as their livestock are their primary source of nutritional intake.

Finally, the peanut sauce recipe served with beans and rice (see below) is a traditional Niger family recipe from Tahoua, Niger handed provided by Amman Imman. Rice is served everywhere and is also one of the staples given by food programs around the globe. Many stews are also served with French-style bread as well.

Traditional Tamashaq (Tuareg) food, consumed by the women of Tangarwashane: Eshahid (strong green tea and sugar – typically made by men), Tegalla (wheat semolina bread broken into small pieces and eaten with a meat or tomato sauce, ilewa (millet pounded and cooked into a paste, and eaten with milk), tilafarat or mofay (rice and meat), ishink (sorghum, rice, or millet with sauce – the sauce can be a green leaf sauce, a vegetable sauce, or a meat sauce), arajira (millet, milk, water, sometimes also eaten with goat cheese and/or dates), Chuku (traditional cheese made from goat and cow milk, also sometimes added to arajira), local tree fruits including ‘pomme de Sahel, goat, camel, and cow milk and meat (especially during rainy and harvest season, or during annual Muslim celebrations). Dates are also typically consumed during celebrations. There are also many medicinal products collected from the trees of the Sahel, known by Tuareg women.

Although Tuaregs in the Azawak eat more millet-based foods, Tuaregs who live in cities eat peanut sauce. Groundnuts, in particular peanuts, are abundant natural resources in West Africa and readily available as an inexpensive form of protein. Peanut sauce is also highly versatile. It can be loaded with vegetables with or without meat and served with different forms of starch, i.e. foufou, couscous, dipped with French bread or over beans and rice.

This meal can be enjoyed with the cold and sweet traditional drinks: bissap (cold hibiscus tea with sugar) and lemoun hari (lemon-ginger tea with sugar).

2 – 3 Large tomatoes chopped in large squares (about ½ inch in size, do not make them too small)

Dashes of cayenne pepper for a kick

Put the onions and oil in a large sauce pan. Sauté for a few minutes, add the garlic and continue cooking until onions become translucent. Once translucent add the tomatoes, bouillon, a few dashes of cayenne and any other vegetables you wish. Cook until the tomatoes begin to break down, then stir in the peanut butter. At this point, turn the heat down some and stir minimally. The sauce is finished when the oil rises to the top and separates.

Additions and Suggestions: Chopped meat can be added with the onions. If using fish or shrimp, these should be added with the vegetables. Spinach, green bell peppers, eggplant, cabbage and okra are traditional additions to the sauce. Add spinach a few minutes after the other vegetables.

Add all, one or none to the sauce. Mix and match for variation. Serve hot with rice, couscous, French bread or beans and rice.