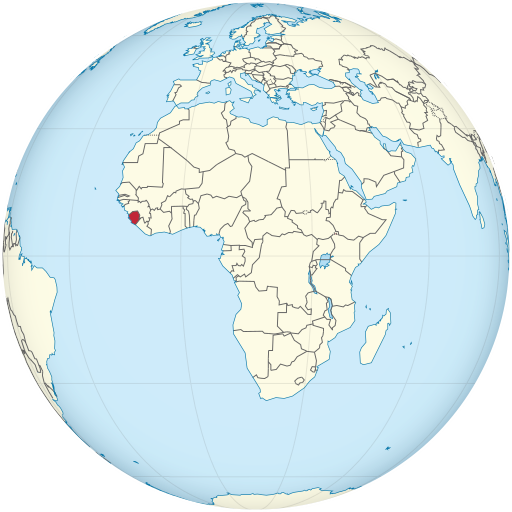 Customs and Cuisine of Sierra Leone

Location: The Republic of Sierra Leone is a country in Western Africa, bordering the North Atlantic Ocean and located between Guinea and Liberia.

Population: According to July 2021 estimates, the population of Sierra Leone is 6.8 million.

Religion: A vast majority of Sierra Leonians adhere to the Islamic faith (78.6 percent). About 20.8 percent identify as Christians and 0.3 percent as practicing other faiths (2013 est.).

Language: English is the official language, but its use as a regular vernacular is limited to a minority. Mende is the principal vernacular in the South while Temne is the principal vernacular in the North. Krio, an English-based Creole that is spoken by the descendants of freed Jamaican slaves, is the first language for about 10 percent of the population but is understood by almost 95 percent of the population.

Sierra Leone was inhabited for thousands of years before Portuguese sailors, in 1460, became the first Europeans to set foot on its shores. Rokel Estuary in Sierra Leone became a trading port, at first of commodities, and then of slaves. In 1787, the “Province of Freedom” later known as Freeport was established by British Philanthropists. In 1792, about 1,200 slaves were relocated from Nova Scotia along with a group of slaves from Jamaica. With time, by 1855 there were over 50,000 freed slaves (known as Krios) who made Freetown their home.

Gaining independence did not bring peace and stability to Sierra Leone. Internal strife and a civil war that started in the 1990s and didn’t end until 2002 would greatly stress the country’s resources. Sierra Leone remains in the process of rebuilding and reemerging form the ashes of its past.

Sierra Leone has a high Total Fertility Rate (5 children per woman) however, its population growth has been depressed by infant, child, and maternal mortality rates that are among the world’s highest. A combination of factors – poverty, a lack of potable water, lack of adequate sanitation, poor nutrition, limited access to quality health care services, and the prevalence of female genital cutting – are all tied to these high mortality rates.

About half the population (56.8 percent) live below the poverty line. Sierra Leone’s population trends young, about 60 percent of the population is under the age of 25. This cohort is faced with having to grapple with high levels of unemployment. The high unemployment rate was one of the causes of the 1991-2002 civil war and remains a cause for major discontent. On a related note, Sierra Leone has the lowest literacy rate in the world. Food insecurity continues to grow. Estimates in March 2020 put the number of people requiring some form of food assistance between March and May of 2020 at 1 million.

Sierra Leone has historically been a destination for and a source of refugees. The country’s civil war led to about 2 million people being internally displaced and another half million seeking refuge in neighboring Guinea and Liberia.

Sierra Leone was emerging from the devastation caused by over a decade of conflict when the Ebola outbreak hit. Between 2014 and 2015 over 14,000 Sierra Leoneans were infected and over 4,000 killed and the economy devastated.

Sierra Leone is ethnically diverse with over 18 ethnic groups documented. The largest are the Mende, who inhabit the East and the South, and the Temne, who live in the Center and the Northwest. Other major groups are the Limba, Kuranko, Susu, Yalunka, Loko, Kono, Kisi, and the Sherbro. The Creoles, the Lebanese, and Indian traders who live in the cities add to the ethnic diversity in Sierra Leone. While there are differences within and among the ethnic group there are some similarities across the groups such as the presence of secret societies, chieftaincy, patrilineal descent, and farming methods.

The traditional villages had a circular pattern with houses clustered around each other. These forms of settlement are slowly giving way to more modern patterns of settlement, linear or grid iron street patterns. Farming is the primary occupation and the sector that the economy is largely dependent on. Fishing is another important economic activity. At weekend markets in the towns, women constitute the bigger share of vendors selling everything ranging from produce and handmade products to services such as tailoring.

Education in Sierra Leone is not mandatory but offered through government-sponsored and private schools. Families that can afford to, or save enough to send the kids to school, do so at least for a few years with preference given to male children when a choice must be made. Many schools have been closed dating back to the conflict of the 90s making access to schools and a formal education a structural and an economic issue.

The social structure in Sierra Leonean society is very much stratified. With subsistence agriculture being the primary way to earn a living, the families who own and control land maintain elite status. These families are typically descendants of warriors or hunters who were early settlers and gained control of land. It is said that women are the backbone of Sierra Leonean labor given that they are responsible for the bulk of the work that keeps households and the economy running: planting and harvesting in the fields, gathering wood and cooking, maintaining the household, and being responsible for child rearing and care. Older children, especially female children, help with household chores and with caring for their younger siblings. Men are responsible for the tasks considered more physically taxing, such as clearing swamps and plowing the fields.

The prevailing household structure is that of the extended family, all working together in the farm. Polygamy is permitted, so households with a single male head of household and more than one wife are not uncommon. Those who adhere to the Christian faith and urban dwellers tend to practice monogamy. Children are adored and a large family is considered a blessing and economically advantageous. Women are considered subordinate to men and live under the authority of their father and after marriage, their husband. They also have fewer legal rights and even less access to education and employment. Rights of inheritance favor male heirs. In the absence of a direct male heir, the rights to property pass to the deceased’s eldest living male sibling. The “property” here includes the wife and children (provided the wife consents) thereby providing some evidence for how women are viewed in the society. Among certain ethnicities such as the coastal Sherbro, the matriarch is the head of household and even head of the lineage or village. In these communities, the women have rights of inheritance.

While customs and traditions associated with weddings vary among the different ethnic groups, the respect it confers on the individuals getting married remains the same across ethnicities. Getting married is viewed as a marker of reaching adulthood. Marriages were traditionally arranged, and the process began when the groom was able to save enough, either by himself or with a little help from family, to offer as a bride price and to buy fine clothing for the ceremonies. There are a growing number of love matches with the increase in the ability to meet at school and work.

The cuisine of Sierra Leone is heavily influenced by West African cuisine. Rice, stews, and fufu are staple dishes. Rice is, in fact, such an integral part of every meal that the saying goes “if I haven’t eaten rice today, then I haven’t eaten!” Rice, in whatever manner it is prepared, is served with sauces or stews made with cassava leaves (considered the national dish), potato leaves, vegetables such as beans, okra, eggplant etc., or animal proteins such as goat meat, chicken, beef, or pork. Seafood is another source of protein, but ground nuts (peanuts) are the primary source of protein in the Sierra Leonean diet. Maggi cubes (bouillon-like seasoning) are a quintessential seasoning used in most Sierra Leonean cooking.

Preparing and cooking food is exclusively a chore relegated to woman and female children. In rural areas, meals are prepared in big pots, placed directly over firewood or a three-stone stove Meals are had family style, out of big serving bowls. The oldest males get first dibs from the communal serving bowl followed by the younger males, and finally the women and female children. It is not uncommon for women and girls to wait until the males have had their fill of food to then take their turns eating.

Food taboos and traditions during ceremonial occasions vary between the different communities, but the offering a serving of food to the ancestors during festive ceremonies marking major familial milestones is pretty common across all communities. Another tradition is to offer alcohol to the ancestors by pouring a small amount in the four corners of the house. Muslims belonging to the Mende community prepare lehweh, a mixture of rice, water, and sugar fashioned as a ball with a kola nut as the garnish. Kola nuts have a high caffeine content (one nut has the equivalent of 2 cups of coffee) and are also a flavoring agent (the “cola” in caffeinated drinks is from the Kola nut).

THE SIERRA LEONEAN WAY OF LIFE

Life in Sierra Leonne is not much different than it has been, traditionally. A large proportion of its population still lives in communities and kin groups with ruling chiefs, the primary sector is still subsistence agriculture, and secret societies are still in vogue.

Settling disputes and negotiating disagreements are sometimes achieved through what is known as “palaver” (not to be confused with a stew of the same name, although legend has it that the stew derived its name from the practice).

Sierra Leoneans are firm fans of football (soccer), and the national football team is known as the Leone Stars. Basketball, cricket, and boxing are other popular sports. Music is an integral part of daily life in Sierra Leone and is a beautiful amalgam of indigenous, British, and French musical traditions.