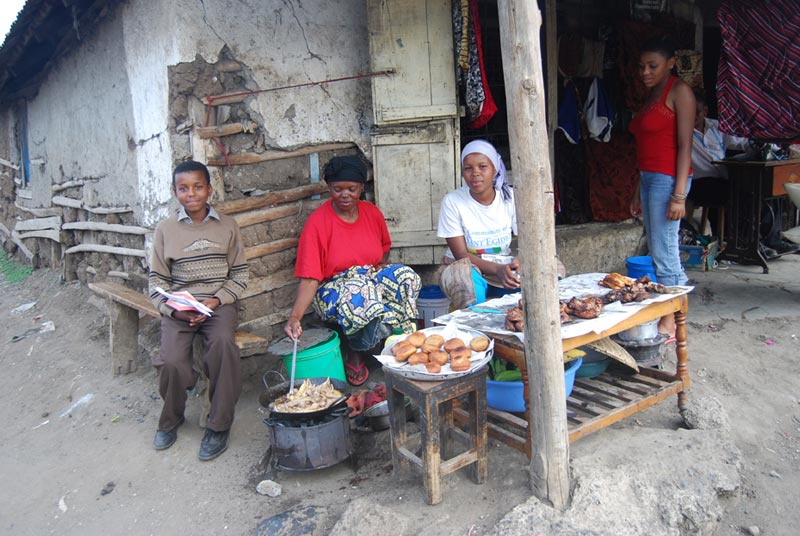 Customs and Cuisine of Tanzania

For Tanzania, its name is a product of its origins. Tanzania is a clipped compound name derived from Tanganyika (the name of the mainland) and Zanzibar (the name of the archipelago), until the two independent states merged in April 1964. Along with the islands Pemba and Mafia, they are what we know today as the United Republic of Tanzania. Images that we often associate with the continent of Africa at large – the Massai warriors, wildebeest migrations, Serengeti National Park, etc. – are all more specifically from Tanzania. Located in East Africa, along the coast off the Indian Ocean, Tanzania is a topographically diverse country, being home to both the tallest mountain (Mount Kilimanjaro) and the deepest lake (Lake Tanganyika) on the continent of Africa. It is also, notably, home to the largest freshwater lake in Africa (second largest in the world), Lake Victoria. A confluence of factors, including the many sources of water inland, the fertile volcanic soils, low density of human settlements on the mainland, etc., have resulted in a richness of biodiversity in mainland Tanzania. About a quarter of the mainland is dedicated to a combination of parks, reserves, and conservation efforts, among them Serengeti National Park, Kilimanjaro National Park, Selous Game Reserve, and the Ngorongoro Conservation Area.

The people of Tanzania are as diverse as its landscape, climate, flora, and fauna. Over 125 indigenous African groups are known to inhabit the country along with immigrants from India, Pakistan, Arab Nations, and to a lesser extent parts of Europe (English, Greek, and German). Even more remarkably, this diversity has come minus the ethnic strife that seems so often to be the price a nation pays for a multicultural heritage. Some hypothesize that this peaceful coexistence is due to the fact that no single ethnic group is politically or culturally dominant over the others. Others point to the policy of “ujamaa” (familyhood) as being the cause for the cohesion. Ujamaa as a philosophy and social practice promotes interdependence and community well-being. Still others posit that the unity comes through their shared language, Swahili. While the ethnic groups each have their own language, nearly all Tanzanians speak Swahili. It is the method of instruction in schools and the official language of the country. Tanzania is a youthful country in comparison to its neighbors in the continent, two-thirds of its population is under age 25 and almost a third of the population is urban. Christianity (61.4 percent) and Islam (35.2 percent) are the prevailing religious belief systems practiced in the mainland. However, in Zanzibar, the population is almost entirely of the Muslim faith.

The extended family with a male head of household is the traditional norm, but with urbanization and increased mobility, nuclear families are becoming less rare. However, the male remains the head even of the nuclear household. Women gain status following the birth of a child. Among some ethnic groups, women are referred to by the name of their firstborn, e.g., “mama X”. While marriage customs vary by ethnic groups, arranged marriages are generally the norm. The practice of dowry or bride price is practiced among some ethnic groups.

Child-rearing is very much an extended family activity, although care is provided mostly by the female among the Ujamaa. The financial ability of the family determines the ability of the children to attend school. When faced with financial constraints, traditionally male children are favored over female children to continue their schooling. As of 2015, the male literacy rate was 83.2 percent while that of females was 73.1 percent.

For a country that is home to both the deepest lake and the largest freshwater lake to suffer from a water and sanitation crisis seems counterintuitive. However, suffer it does and the reasons are both simple and complex. The simple facts: location. The rural poor live in arid and semi-arid areas that are located far from the major lakes. Tanzania’s diverse topography works to the disadvantage of the disadvantaged. To be able to access these sources of water requires long treks by the women and girls of the households, which puts them at increased risk for assault. Then there is the complex problem of these sources of water themselves being at risk due to pollution (industrial sewage and agricultural run-off) and mismanagement. Compounding these problems is the lack of infrastructure to store and treat water. While figures vary, estimates suggest that almost 50 percent of Tanzania’s population (27 million) do not have access to a safe source of water and 66 percent (35 million) do not have access to improved sanitation facilities. Water-borne illnesses are a major health problem in the population and the region is classified as “high risk” for the potential to contract a water-borne, water-based vector-borne, or water contact illness.

The Food of Tanzania

Tanzanian cuisine is a reflection of its colonial influences and the many immigrants who have made it home. The spices that were brought over from India to Zanzibar (the “Spice Island”) and the coconuts that dot the coast feature prominently in the dishes. The Middle Eastern influences are seen in grilled meats and pilau, a spiced rice dish. Chai (sweet, spiced, milk tea), Chappati (flat bread), samosas (fried savory turnovers) are distinctly Indian dishes that have made their way to Tanzania and taken on local flavors. Chai is consumed throughout the day and is very sweet, occasionally spiced with cloves and/cinnamon.

Breakfast is a light meal consisting of bread with butter or chappatti or Uji (a sweet porridge) and chai or coffee. Occasionally one might be treated to “chipsi mayai” which is an omelette of sorts with sautéed potatoes.

Lunch and dinner are typically “ugali” with a side of meat stew or fish, beans, or cooked vegetables. Ugali is the national dish of Tanzania. Made of corn flour, semolina, or sorghum flour and water, it is the starch of choice across the country. This dough-like mash is often the vehicle for sauces and meats. Eaten with the hands and used as a utensil of sorts by forming it into balls, Ugali is by itself flavorless and takes on the flavor of whatever dish it is used to dip in (much like a chip).

The Tanzanian Way of Life

Tanzanian’s pride themselves on their even-keeled approach to life and their sanguine demeanor. Passionate displays of emotions, be it anger, or affection are considered unbecoming and a sign of a lack of discipline. As with most cultures that value multigenerational families, the Tanzanians respect and value their elders. Despite the shift toward changes in some traditions, the elders are still considered to be more knowledgeable and questioning their opinions is frowned upon.

Gender roles are very well defined and fit traditional norms: women and female children take care of home, hearth, and childrearing. Work outside the home is restricted to tending to small livestock and planting or weeding. The male members are responsible for the financial decisions related to the management of the family. The men work outside the home tending to the fields and livestock and tasks that involve using machinery. With greater access to education, these gender norms are now being challenged.

For visitors, greetings of “Jambo” (“Hello” in Swahili) followed by a handshake are the preferred form of address. Only the right hand is to be extended in greetings. The left hand is to be used for ablution and is therefore considered “unclean” and not to be used for eating or greeting. The general ethos of the culture is one of taking one’s time and this extends to greetings, visiting, and dining. So, handshakes can be long, and greetings must be extended to all in the room and not just the host. While gentle pats on the shoulder, touches on then arm, etc. among the same sex during conversation are quite common while communicating, prolonged eye contact is not.

Families eat together, seated on mats on the floor. In some ethnic groups, males and females eat separately. Hands are always washed prior to eating and only the right hand is used for eating. Smelling one’s food, getting a whiff of its aroma prior to digging in a gesture that is a compliment in some cultures, is extremely offensive in Tanzanian culture. Smelling one’s food is construed as testing to see if it is acceptable and that, as one might imagine, is an affront to the host. Tanzanians see plying their guests with food as a gesture of goodwill and eating all the food on one’s plate (however tall it is heaped) is assumed to indicate that one is still hungry and an invitation for more servings. Visitors are therefore advised to leave a little on their plates to signify that they are full and satisfied.

The Swahili sense of humor is evident in their slang term for people of European descent/White travelers/visitors: Mzungu which literally means “one who goes in circles”.

Customs, Greetings and Etiquette in Tanzania. Work the World.