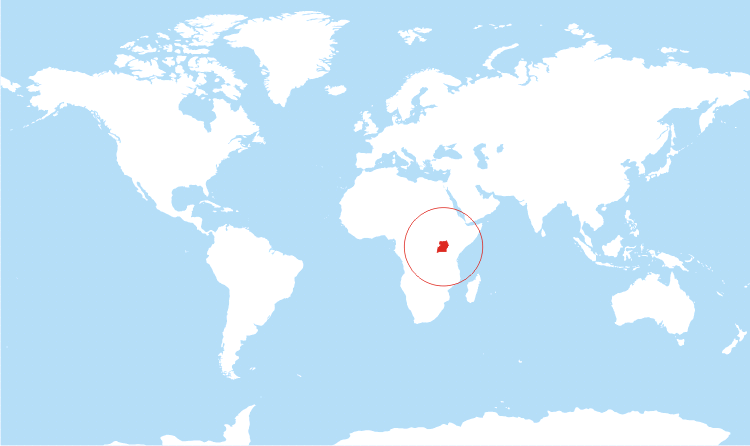 Customs and Cuisine of Uganda

“The pearl of Africa,” Uganda is a country in East Africa located between Kenya to the east, Democratic Republic of Congo to the West, South Sudan to the North and Tanzania to the South. Uganda’s boundaries were determined, rather arbitrarily, by the British whose colony it remained until it gained independence in 1962. This arbitrary drawing of boundaries is often cited as the reason for Uganda’s diversity as it grouped different ethnic groups of differing cultural and political affiliations into one national identity. While landlocked, Uganda lies within the Nile basin and is home to many lakes: Victoria, Kyoga, Lake Albert, Lake Edward, and Lake George. Fertile and featuring different ecosystems (rainforests, volcanic mountains, swamps, forests and plateaus). The relief and topography of Uganda are interestingly diverse.

While Uganda is home to different ethnic groups, Ugandans are broadly categorized into three major groups on the basis of the root language and region, 1. Nilotic of the North, 2. Bantu of the South and 3. Sudanic of the Center. The major ethnic groups are: Baganda (16.5 percent), Banyankole (9.6 percent), Basoga (8.8 percent), Bakiga (7.1 percent), Iteso (7 percent), Langi (6.3 percent), Bagisu (4.9 percent), Acholi (4.4 percent), and Lugbara (3.3 percent). Census estimates for 2018 put the population of Uganda at 40.8 million, a number that factors in the high mortality associated with AIDS, which continues to be a public health issue. About 1.7 million Ugandans were estimated to be living with HIV/AIDS in 2017.

At 5.8 children per woman, Uganda has one of the highest fertility rates in the world. A combination of factors, such as desirability of large families, lack of access to contraception, the relative status of women in society wherein they have less power of decision over matters such as family size all contribute to not just the high fertility rate but the gap in actual fertility versus desired fertility.

There are over 32 languages spoken in the country of which English and Swahili are official languages and, along with Gandu, are the most commonly spoken.

The extended family is the traditional family unit. Kin groups act as the larger support system. The social hierarchy is largely patriarchal, with men being the financial and social head of the household. Roles, both within and outside the household, are gender-specific, with women and older female children being sole caregivers for infants and young children, while men work outside the home. Food preparation is also considered women’s work and meals in a household are prepared exclusively by women and female children.

The Food of Uganda

Matoke, an indigenous type of banana, is a staple of the Ugandan diet. Cooked when green and unripe much like plantains, it is prepared boiled, roasted, or mashed. It is often eaten with Binyebwa, a peanut sauce. As in other countries in the continent, Ugali, a porridge made from maize, is a mainstay of Ugandan cuisine. Oluwombo is a stew that is made with chicken, beef, or fish and vegetables such as carrots and mushrooms in a peanut sauce base. Muchomo, which translates to “roasted meat,” is skewered and roasted mutton, pork, or beef. Chapati, a flatbread of Indian origin, is used to scoop curry or to wrap roasted meat.

The Ugandan Way of Life

Two meals a day, lunch and supper, are the norm. Breakfast is typically porridge or chai. At meal times, members of a family wash their hands and sit together on a mat on the floor and eat with their hands. Visitors who arrive during mealtimes, whether expected or unexpected, are always invited to join. Meals are eaten in companionable silence, and talking when not spoken to is considered rude. Water is consumed only at the beginning or the end of the meal. At the end of the meal, all who partook in it take turns to compliment/thank the woman of the house who prepared the meal.