Customs & Cuisines of Nepal | Street Child US
← Return to Project 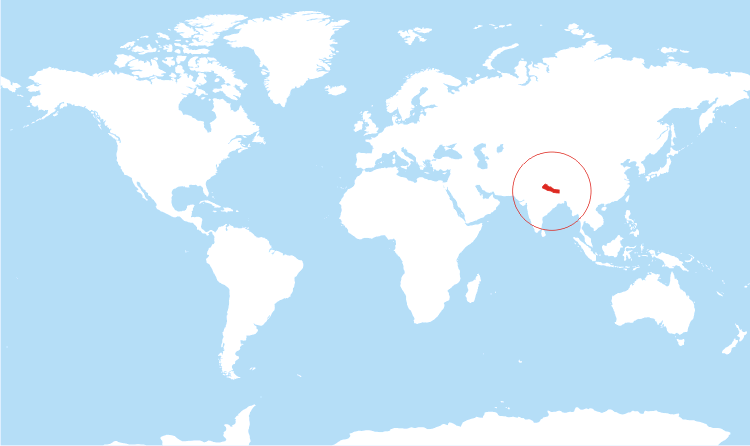 Customs and Cuisine of Nepal

Located between states of India to the south, east and west and The Tibet Autonomous Region of China to the north, Nepal is a land-locked country in South Asia. About 75 percent of Nepal’s topography is covered by the Himalayan mountain range. Nepal is home to 8 of the 10 tallest peaks in the world including the tallest peak, Mount Everest, revered among the locals as “Samgarmatha” (Goddess of the Universe).

While there is no consensus on the origins and meaning of the name of the country, theories abound. One of the more acceptable ones being that Nepal is a corruption of Newar, named after the people who inhabit the valleys of Kathmandu, the capital of the country. The topography of Nepal, from tall peaks to the plains of the Ganges river that are just above sea level make for different ecological zones and diversity in flora and fauna.

Political ideologies that favored isolationism coupled with its land-locked nature kept Nepal “closed” to the world until 1950, when the system of inherited Prime Ministership that had pushed isolationism was overthrown. Power was restored to the monarchy in 1951, and in 1991, the country moved to a parliamentary system under the monarchy. It was only in 2008 that Nepal became a democratic republic free of the monarchy.

Often confused as an extension/territory of one its neighbors, India or China, Nepal is very much its own country despite its many shared ethnic and cultural identities with the two neighbors.

The July 2018 estimates has the population of Nepal (which is comparable in size to the state of New York) at 29,717,587. Known variously as Nepali or Nepalese, in 2011, about 125 caste and ethnic groups were identified as co-existing in Nepal. They are broadly classified into three categories: Indo-Aryans, Tibeto-Burmans, or indigenous Nepalese. The Indo-Aryans, such as the Pahāṛī, the Chhetree, the Brahman-Hill etc. are the product of Indian migrants into Nepal and are predominantly of the Hindu faith. The Tibeto-Burmans such as the Tamang, Rai, Limbu, Bhutia (including the Sherpa), Sunwar, Magar and Gurang trace their origins to Tibet and are known to practice Buddhism, Hinduism, or Animism. The indigenous Nepalese such as the Newars and Tharus are considered the native inhabitants of the region but have largely adopted the Indo-Nepalese customs and are predominantly Hinduism-practicing.

Nepal is largely rural, a function of its topography, isolation and its lagging economic development. Aside from its capital, Kathmandu, there are few major cities. The majority of the Nepali thus dwell in villages or in small urban centers with only 19.7 percent being recorded as urban-dwelling (2018).

The extended family with patrilocal linkages is the norm, with a male head of household. Gender roles are well-defined, with the females tending to the home and offspring while the males work outside the home. While females are expected to be and are subservient to the males, mothers are afforded a great deal of respect within the home.

The social structure is stratified both along caste and economic status. Both within a household and within the community, age confers greater authority and respect. Even among children, the younger siblings in the birth order are to address the older siblings with respect. This respect is demonstrated through language, through usage of the honorific forms of address.

While arranged marriages are the norm, love matches are increasingly gaining acceptance when they satisfy certain rules (caste, religion, etc.). These “rules” are often religion-dependent, for instance among the Hinduism-practicing Nepalese, marriages within kin-groups (cousins) are forbidden. Among the Gurung however, marriages between cousins are permitted. Divorce carries stigma and is uncommon. Oftentimes couples might separate but remain legally married to avoid this stigma. In the rural regions, with inheritance and management of the household income being entrusted to the males (even in a joint income household), divorce or widowhood could be crippling to women in more than one way. In recent years, Nepal has made strides in reducing the gender gap in greater labor force participation and representation of women in government (currently ranked 105/149 countries with a score of 0.671 on the parity scale where 1.00 approaches parity).

The Food of Nepal

The cuisine of Nepal has similarities with Indian and Tibetan cuisine, while having a greater slant to a more plant-based diet than its neighbors. It is also more lean-animal protein based and utilizes less dairy in dishes such as curries. Its predominantly mountainous terrain means Nepali cuisine differs from its neighbors’ through dishes such as yak curry and buffalo steak.

Dal Bhat is often considered the national dish of Nepal. Almost identical both in name and preparation to Dal Bhat in India, the dish is curried lentil soup (Dal) and rice (Bhat). Where Indian food tends to utilize more spices, Nepalese food is milder on the heat but favors a more sour/tart flavor profile.

Momos are another quintessentially Nepalese dish. Steamed or fried dumplings that trace their origins to Tibet, Momos are part appetizer, part side dish but all comfort. Stuffed with ground meat or vegetables and ginger, garlic, cilantro, and cabbage, Momos are served with a savory tart dipping sauce called achar.

Chatamari is Newari style dish that is comparable to pizza. A rice crepe/flatbread that is topped with ground meat, onions, tomatoes, and a fried egg.

Dhido is a thick polenta like dish made with buckwheat flour, millet, or cornmeal. It is served with curry, vegetables, greens, and yogurt in a thali-style meal. Thali style meals are a staple in parts of India wherein a serving of grain/starch, vegetables, curry, soup, yogurt, and sometimes dessert are served in individual single-serve bowls arranged in a big plate (thali). The thali represents all the components of a balanced meal being served at a meal with the individual components being complementary to each other.

Thukpa is a noodle soup of Tibetan origin. Made with rice noodles, shredded meat, and julienned vegetables, the Nepalese version has more heat through the addition of chilies and garam masala (a combination of spices that is popular in Indian cuisine).

The Nepali Way of Life

Loyalty and honesty are considered core cultural values among the Nepali, and their way of life reflects these core values. Viewed as a very stoic and agreeable culture, where hardships are treated as a natural consequence of life and living in general, Nepali are mild-mannered and laidback. A culture that has a high score on collectivism, the way of life has evolved to be interdependent and often times personal ambition is set aside in the interest of community well-being. In a country that ranks among the least developed in the world, absent a government funded safety net, neighbors/friends pitch in to help one another, going as far as to pool assets in times of need acting as a de facto safety net. The lack of economic opportunities within the country necessitates seeking opportunities outside the country with male members in some families working in neighboring countries and sending money home. Over 30 percent of the national economy is thus dependent on foreign remittances, with workers sending money home.

Another example of this collectivistic cultural ethos is evident in how the Nepali feel most comfortable as a group. They rarely travel or eat alone and enjoy and actively seek both conversation and companionship.

The traditional greeting is “namaste” (“I greet the holiness within you”) with palms pressed together at chest level. Honorific titles are often used as a sign of respect or as a nod to the receiver’s age/status. An older woman may be referred to as “Didi” (older sister, even if no formal relation exists), an older man, “Daai” (older brother), a younger male “Bhaai” (younger brother), and a younger female “bahini” (younger sister). The suffix “ji” is added to a name to denote respect, “Namaste, Jane-ji!”.  The Nepalese equivalent of “Hi, how have you been?” Would be “Namaste, have you eaten yet?”

The cow is sacred to Hindus who abstain from consuming beef. In Nepal, beef is rarely consumed but “buff” meat (buffalo meat) is. Nepalis generally abstain from drinking alcohol, as well.

Being respectful of things that are considered of value is another core cultural value, a value that is common among the Nepali’s neighbors as well. Food and education, for instance, are considered valuable. Education is venerated and feet are considered unclean (“jutho”), so the Nepali avoid touching or kicking books, stationery, paper, or other reading and writing materials as they are conduits of knowledge and an insult to the Goddess of Education, Saraswati (a Goddess worshipped by Hindus everywhere). Spilling food and then stepping on it is likewise considered an insult to the Goddess of Food.

Nepal is a popular destination for backpackers and hikers not just as it is home to eight of the ten tallest peaks in the world but also because the Nepali are some of the most friendly and welcoming people in the world. The transition from tourist to “guest” is inevitable and one of many reasons most visitors become return visitors.