Customs and Cuisine of Myanmar
← Return to Project

Customs and Cuisine of Myanmar 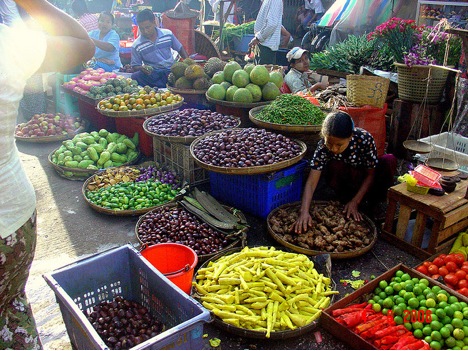 Customs and Cuisine of Myanmar


Myanmar has diverse and deep culinary traditions. At the crossroads between South and Southeast Asia, you find the tangy spices of some Indian curries alongside the sweet and spicy flavors often associated with Thai food. Across Myanmar, daily meals may look very different depending on one’s ethnicity, economic status and geography, but almost all will have at least one meal, if not two, that features rice every day. You will also find a variety of noodle dishes that accompany pork, chicken, fish and vegetable curries. Meat tends to be more expensive and is used in small quantities and sparingly.

Because Myanmar also has diverse geographical features, favorable seasonal conditions and is naturally endowed with fertile soil and water resources, it boasts an abundant supply of food in a great variety all year around. Dishes may be prepared in a variety of ways, but the most common method is to cook meat or fish in oil, seasoned with pounded onion, garlic, ginger, turmeric, chili and spices, and simmer until all or most of the water evaporates. The essential and most popular condiment is a kind of relish made from preserved fish or prawn, served with chili powder.

Often Burmese and other ethnic food can be complicated and take many hours to prepare. Pots of boiling stews sit on top of the fire all day in the villages and towns and salads include so many ingredients that must be diced, chopped and sliced. In addition to Burmese-style curries, rice and noodles, people all over the country eat Indian samosas and roti as a quick and cheap snack. Myanmar people enjoy rice as their main food and it comprises about 75 percent of the diet. Rice is served with meat or fish, soup, salad and vegetables all cooked in their own ways, and some relishes to complement the meal.

During meals, all the dishes are laid out on the dining table and served together so that diners can make their own choices and combinations. Most traditional snacks, which are rich in variety and taste, are generally made with rice. Mohinga, or rice noodle served with fish soup, is the favorite Myanmar dish mostly enjoyed at breakfast or on special occasions. Laphet, or pickled tea leaves, with a dash of oil and served with sesame seeds, fried garlic and roasted peanuts, is another popular snack typical of Myanmar.