From Shame to Confidence:  Repairing a Devastating Injury

Editor’s Note: This article is a  frank discussion of obstetric fistula and its causes. It may be uncomfortable to read. We believe it is important to provide a clear understanding of this injury as we support efforts to prevent it and to care for those who suffer from it.

Obstetric fistula is a childbirth injury resulting from obstructed labor.  When the baby cannot pass through the mother’s pelvis, the birth contractions continue to keep the head lodged against the bones of the pelvis.  Without medical intervention, the baby usually dies.  Labor continues, and eventually the dead infant is expelled.  The mother may then find that she is no longer continent.  The baby’s head has cut off the blood supply to the tissues of the vagina and the urinary tract and/or rectum, the tissue dies, and a hole develops between vagina and urinary tract, vagina and rectum, or sometimes both. Her bodily wastes begin to leak continuously.

Without skilled surgical intervention, the victim will continue to leak urine and/or feces—for the rest of her life.  Her husband usually rejects her, her parents may build her a small hut on the edge of her village, and her community will treat her as a pariah.  Because she smells bad, she is unpleasant to be around. They may believe she has been cursed by God. The acid in urine and feces can cause severe sores on her legs.  Severe dehydration may also result as she limits her intake of water to minimize the uncontrolled flow.

According to the UNFPA – the United Nations Population Fund – at least 2 million women in sub-Saharan Africa, South Asia and the Arab region are living with fistula, and some 50,000 to 100,000 new cases develop each year.  Only a fraction of the victims will have the opportunity for surgical repair, although most fistulas can be repaired.  The Addis Ababa Fistula Hospital in Ethiopia, where over 30,000 surgeries have been performed, has demonstrated a cure rate of 90 percent.

“Nobody wants a woman who passes stools all the time and smells.  People would ask who is making that bad smell, coughing and covering their noses.  So I was always isolating myself.  I was thinking that the rest of my life would be like this until I died.”
— Farhiya Mohamed Farah, was divorced when she was pregnant with their second child

This month, Dining for Women is supporting HOPE Foundation for Women and Children of Bangladesh.  Its goal is to create an Obstetric Fistula Team to conduct fistula repair surgeries year-round, and to implement a prevention and awareness campaign. 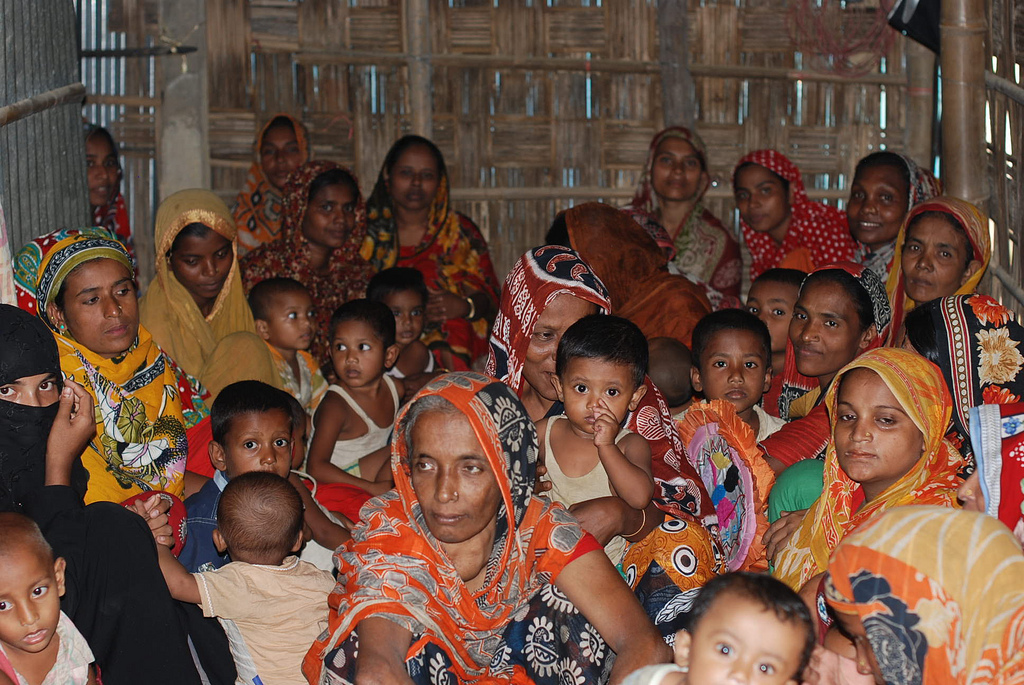 One of the 38 Mothers’ Clubs that will provide the space and attendees for the prevention workshops as well helping the HOPE Foundation locate surgery candidates.

A brief history of obstetric fistula

For generations, women and girls had suffered from obstetric fistula with no hope of a better life.  There were no techniques for prevention or intervention, meaning that women and girls from all walks of life would have been affected.  In her book, The Hospital by the River, Dr. Catherine Hamlin – the most famous fistula surgeon in the world today – gives a brief history.  She notes that the first known reference to fistula was contained in a papyrus scroll, discovered between the knees of a mummy at Thebes, dating to about 1550 BC.  It was a very long wait for a surgical solution.  In the mid-1800’s, an Alabama surgeon, Dr. J. Marion Sims, carried out a series of operations on slave women with obstetrical fistula and developed a successful surgical technique.

The most common method in modern practice for dealing with obstructed labor – and thereby preventing obstetric fistula – is the Caesarian section. The first modern Caesarean section was performed by German gynecologist Ferdinand Adolf Kehrer in 1881.  But many of the women and girls who would benefit from this surgical intervention don’t have the means or opportunity to take advantage of it.

Although obstetric fistula could happen to any woman or girl, there are a number of conditions in the developing world that make it far more likely. 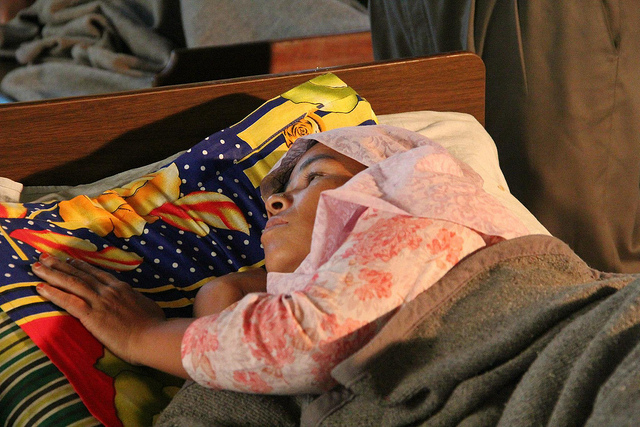 Child Marriage:  In much of the developing world, girls are often married at, or even before, puberty. A major value placed on women and girls is their ability to reproduce, so a girl is expected to become pregnant as soon as possible, even if she is only 11 or 12.

Although child marriage is a violation of the Universal Declaration of Human Rights and the African Charter on the Rights and Welfare of the Child, and many nations have laws banning child marriage, customary practices continue—especially in rural areas.  In addition to being customary in many cultures and countries in the developing world, there are specific reasons for child marriage:

According to a 2013 report by the United Nations Population Fund, “The risk of maternal death for mothers under 15 in low- and middle-income countries is double that of older females; and this younger group faces significantly higher rates of obstetric fistulae than their older peers as well … Although fistula can occur to women at any reproductive age, studies in Ethiopia, Malawi, Niger and Nigeria show that about one in three women living with obstetric fistula reported developing it as an adolescent…”

Poor Health/Inadequate Nutrition:  In some cultures, girls are the last in the family to eat.  In very poor families, a girl may be significantly malnourished.   Even as an adult, many young women are stunted, having been chronically malnourished, and their pelvic structure may never fully mature.  Their small bodies can be inadequate to the task of childbirth.

Female Genital Mutilation:  Many cultures in the developing world practice this.  The World Health Organization notes that FGM itself can cause obstructed labor that requires caesarian section.  Without the caesarian section, fistula might well be the result. 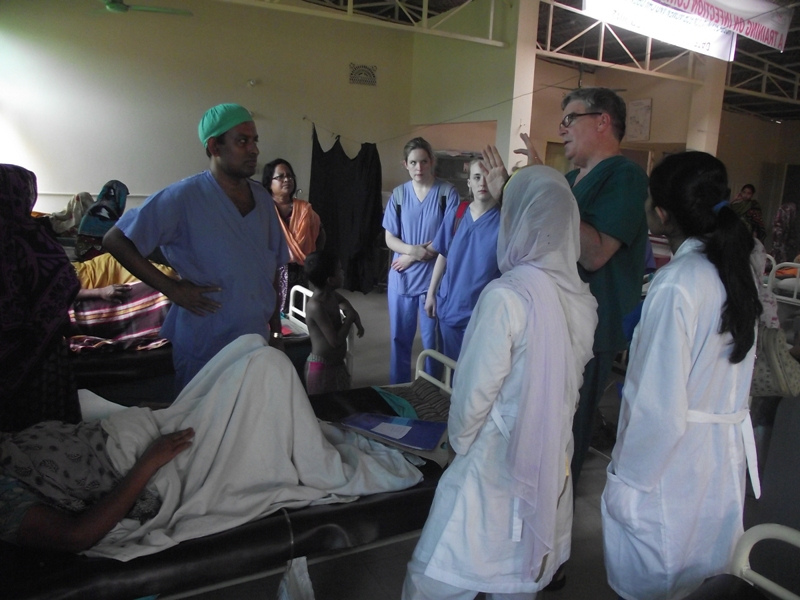 Lack of Access to Medical Care:  As noted above, the usual way to end obstructed labor and prevent fistula is by caesarian section.  However, that would require timely access to skilled medical care.  Most cases of fistula occur in rural areas and among the poor.  Medical facilities may be many miles away, there may or may not be a road, transportation may be limited or unaffordable, and what facilities are available may be poorly staffed clinics unable to handle these cases.  In such situations, it is unlikely that the mother has had any pre-natal care.  In many cases, by the time it is clear that the mother is in trouble and needs a much higher level of care, it is already too late.

Status of Women and Girls:  In developing countries, women and girls are not valued as fully equal human beings.  They have little or no control over their lives—whether or not they are educated, when they marry and to whom, what kind of labor they perform, when they have sex, whether or not they become pregnant, how many children they bear, where they live, their access to health care and how much violence they have to endure.

Obstetric fistula surgery is well understood and ever more widely practiced.  Even women who have been living with the physical, social, and emotional consequences of obstetric fistula for many long years can benefit from surgery.  Their confidence as well as continence can be restored, allowing them to return to society and live out their lives with dignity.

Traumatic Fistula:  It should be noted that not all devastating fistulas to the reproductive organs are caused by childbearing.  Thousands of women and girls suffer from fistulas caused by gender-based violence, especially in conflict zones where wars are fought on the bodies of women.  The most prominent conflict of that nature in the world today is the ongoing violence in the Congo.  To terrorize the civilian population, soldiers on all sides use violent gang rape, and rape perpetrated with bayonets, broken bottles, sharp sticks, and sometimes gunfire, leaving women and girls with devastating injuries.  Many of the effects are the same as for obstetric fistula.

There is a hero in this story:  Dr. Denis Mukwege of Panzi Hospital in Bukavu, Congo.  Dr. Mukwege has pioneered many techniques to repair the damage to thousands of women – some of them more than once.  In 2012, he was attacked and his bodyguard was killed.  But Dr. Mukwege will not give up.   He does as many as 10 surgeries in his 18 hour days.

May 23 is the United Nations’ International Day to End Obstetric Fistula, which promotes action towards treating and preventing obstetric fistula. Obstetric fistula doesn’t have to happen if prevention and correction are made priorities in the developing world.  Organizations like HOPE Foundation are on the front lines, fighting for the health—mental as well as physical—of girls and women suffering from this profound injury of body and spirit.

“Women are not dying because of diseases we cannot treat.  They are dying because society has yet to make the decision that their lives are worth saving.”
— Mahmoud Fahalla ,  Egyptian obstetrician/gynecologist