When War Meets Birth: Postpartum Depression and the Future of a Post-Conflict Generation
Food For Thought 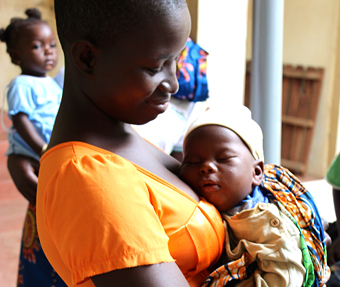 The birth of a baby should be cause for joy and dreams of the future. But when the future is uncertain and the past is marred by violence and war, mothers who may be unable to care for themselves find that they are ill equipped to deal with the endless needs of a newborn.

While maternal mental disorders are a vulnerability for all women, it is compounded for those in war zones. Healing from postpartum depression can be a challenge even when mental healthcare and support are available. In refugee and post-conflict populations, where mere survival has been the goal, women and babies suffer.

“We have a lot of cultural ideology, particularly in this country, about motherhood and pregnancy,” Diana Lynn Barnes said. Barnes specializes in women’s reproductive mental health at The Center for Postpartum Health in California and is the editor of Women’s Reproductive Health Across the Lifespan. “We tell people it will be the happiest time in their life.”

A woman’s mental health can be affected by postpartum depression no matter what the circumstances of birth.

“We consider the whole first year postpartum as a time of clinical significance,” Barnes said. “The baby blues is something very, very common. It happens to about three out of four women who give birth.”

The baby blues can be characterized by mood changes, anxiety and teariness and can occur three or four days after birth. It generally does not last more than two weeks.

“We become concerned about postpartum depression when a woman’s symptoms are still occurring beyond the two-week period and now are interfering with a woman’s ability to cope,” Barnes said.

Postpartum depression most often looks like severe anxiety, Barnes said, with sleep disturbances, confusion, and fogginess. Some women may even have suicidal thoughts. Women with post-partum depression sometimes feel disconnected from their baby and often talk about going through the motions of taking care of their infants. Women may also experience postpartum depression with obsessive-compulsive symptoms. Those women may have intruding and repeating thoughts, often about harm coming to the baby.

In very rare cases, women may have postpartum psychosis, a potentially life-threatening medical emergency in which women experience a break with reality.

For some women living in conflict or post-conflict zones or for those who have fled such areas, postpartum depression is coupled with post-traumatic stress disorder (PTSD).

“Many of these women already have a history of trauma and the process of giving birth may act as a reminder of those memories,” Barnes said. “For other women, unexpected events during labor or delivery may feel traumatic and can result in symptoms of post-traumatic stress.”

In many conflict areas, rape is now used as a weapon of war, which means women may still suffer trauma as a result of the sexual assault.

Consider the situation as described by the Peter C. Alderman Foundation, the Dining for Women featured program for September 2015:

“In northern Uganda, previous war trauma combines with ongoing poverty, stigma and gender-based violence to form a toxic environment for maternal mental health. The invisible wounds of war – including depression, anxiety, and PTSD – produce enormous suffering and keep as many as one out of four childbearing women from functioning as individuals, mothers, and productive community members. Women suffering perinatal depression are at high risk for suicide.

Research consistently demonstrates that maternal mental disorders have a profound impact on the next generation: these disorders are associated with suboptimal growth and development of children, and are associated with pre-term birth; low birth weight; increased prevalence of diarrhea, malnutrition, and childhood disease, and incomplete immunization schedules.”

According to Netherlands researcher Elisa van Ee,[1] asylum seekers and refugee mothers with more severe symptoms of post-traumatic stress reported more anxious and depressed behavior of their children. Parents showing more symptoms of post-traumatic stress were less sensitive and structuring and more hostile to their children.

Mothers suffering from depression and PTSD are often unable to participate in the care of their infant to such a degree that it has a profound impact on mother-child attachment.

“Prolonged disruption in the attachment process is significant,” Barnes said. “It’s only in rare cases that children don’t form attachments, but the quality of the attachment can be affected when a woman has untreated depression.”

According to researcher Erin Gangaware,[2] less involved parenting has been shown to lead to a wide range of social-emotional problems in children. Lack of parental interaction and warmth has been associated with children’s inability to form a secure attachment with a caregiver, increased behavioral problems, as well as difficulty forming social relationships later in life.

According to van Ee, symptoms of post-traumatic stress of both mothers and fathers were directly related to an insecure or disorganized attachment organization of their children.

“In the specific case of children born of wartime rape, a group in which the consequences of the traumatization can be magnified because of the connection between the child and the traumatic experience, attachment disorders, or more specifically disorganized attachments, and identity issues were identified as a risk factor. The evidence suggests that although many parents recover well after extreme life events and many children show resilience despite having affected parents, traumatization can cause parenting limitations, and these limitations can disrupt the development of the young child.”

Barnes said depression and PTSD can rob women of joy.

“What’s particularly poignant and painful is that women want to feel connected to their babies,” she said. “Depression strips mothers of the very things they need to care for their babies – enthusiasm, joy, energy, stamina and resilience. Prolonged untreated postpartum depression can affect insight, as well as the predictability and reliability of a mother’s response.”

In children, the effects are very real.

“When a perinatal mood or anxiety disorder is left untreated, children become more vulnerable and some of the consequences of disruptions in the developing attachment relationship are language delay, emotional and behavioral disturbances, along with depression and anxiety,” Barnes said.

“This study shows that while parental trauma may put children at a higher risk for their own mental health problems, supportive family and peer relations may act as a protective factor. This has important implications for refugee parent-child relationships in that while external factors due to refugee status may have negative implications for their children, parents can lessen that negative impact by providing children with a strong sense of family cohesion.”

Promotion of family cohesion has implications for services provided for refugees and those in post-conflict zones.

“When a mother responds and soothes her baby, that begins to regulate the infant’s emotional state in the early weeks of life,” Barnes said. “The emotional life of the infant and the attachment relationship begin in utero.”

Barnes said untreated anxiety in pregnancy can actually affect the neurobiology of the infant’s developing brain.

“Severe, prolonged stress crosses the placenta and so the fetal brain is being affected by cortisol and stress hormones,” she said.

In fact, untreated depression during pregnancy can increase the risks for a low birth weight baby and/or a prematurity.

Addressing this important mental health issue has the potential to impact many generations.

According to the Attachment Treatment and Training Institute, children lacking secure attachments with caregivers commonly grow up to be parents who are incapable of establishing this crucial foundation with their own children

Even in the best of circumstances, a mother’s mental health affects her baby. In conflict and post-conflict areas, it desperately compounds an already untenable situation.

“A mother’s mental health affects her baby,” Barnes said. “Perinatal mood and anxiety disorders are a systemic issue, affecting not just the new mother. If a mother is severely depressed and that depression is not treated, it has an effect on her baby, the partner relationship, her family members. This doesn’t belong to women only. It’s a public health crisis.”

Hope for the future

As healing begins both individually and corporately through programs such as the Peter C. Alderman Foundation’s community based maternal mental health care, other countries and communities serve as models for what can be. In Rwanda, 20 years after the country’s genocide, rapid and successful post-war reconstruction and recovery serve as an example for the rest of the world, according to the United Nations Development Program. In fact, the country is expected to meet and possibly surpass Millennium Development Goal targets for child and maternal mortality this year. Women have greater access to family planning and to skilled birth attendants.

For women and infants in Uganda, the PCAF program offers hope for survival, recovery and for a future in which both mother and child can be healthy. That, in turn, means a brighter tomorrow for their family, their community and their nation.

More on When War Meets Birth: Postpartum Depression and the Future of a Post-Conflict Generation