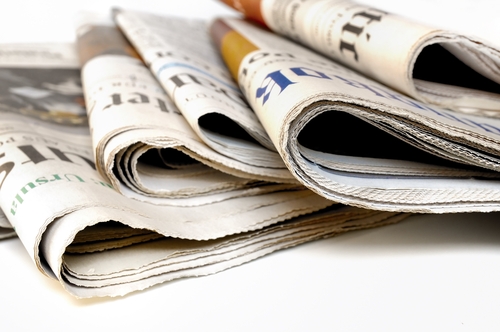 On the wall in my office there’s a map showing newspapers and periodicals in a portion of the country based on data from the 1880 Census. It is actually one of the first infographics with red triangles showing dailies, blue dots showing weeklies, squares showing periodicals and different colors denoting the number of each in the area. There is hardly a town not covered with dots, triangles and circles.

Today, there are many fewer formal publications and yet probably even more communication channels when one considers blogs, websites, tweeters and more. Nonetheless, when a group, business or non-profit wants to get information out they turn to the established media: newspapers, television stations, magazines and, perhaps, established mainstream blogs.

Often, they find they don’t get the response they expected. So here are five tips to get your press release or information noticed.

1. Have a news peg. Whether it is good or bad for the future of journalism, it is still a fact that news outlets need reasons to be interested in things. What is the news peg for your release? Is it a meeting that you are having, an event that’s coming up, an anniversary, a fund-raiser? Make sure you make it clear that there is a timeliness to your request for coverage. Be clear in explaining why other people should be interested in your event, not just why you find it interesting.

2. Tell a story. When I was a newspaper editor, I told reporters all the time to think like readers. Try to remember that they don’t know what you are talking about and tell them a story that will interest them, inform them, and involve them. Too often organizations write releases that assume some level of knowledge about the group and its mission. Assume you have just met someone who has just moved to your town and they know absolutely nothing about your group. Now tell them a story. Make it interesting to hold their attention and compelling to capture their imagination. But also make it thorough. (Use this ‘boilerplate’language to describe DFW.) Not sure if your press release meets this test? Give it to someone not involved in your group to read and gauge their reaction.

3. Think like a reporter. I say this with all the love and respect I have from 35 years in newspapers: reporters are lazy. If you want to get something published, you will want it to be as complete as humanly possible. If you try to send the news outlet to other places (check our website for more information), there’s a good chance that will backfire and you will end up in the “circular file.” No matter what embellishments you make, all good news writing still covers the five basics – who, what, when, where and why. Answer those questions with clarity and brevity and you will have a far better chance at attracting a news outlet’s interest.

4. Know what you want. Newspapers used to get press releases and an editor would look them over to see if there was anything newsworthy enough for coverage. A second tier that was not deemed worth a reporter’s time but still might be a decent “blurb” or calendar item would be given to a clerk to write up. A third tier would be relegated to the previously mentioned circular file. Today, automated self-service systems fill the role of clerks – and even sometimes editors. Most news outlets have an online system for submitting information. Normally, this is run “as is” in various calendars or specialty listings depending on the selections you make when you enter them. If you send a press release hoping for coverage, but you’d be happy to have a listing, then you need to submit the information yourself. Yes, you are doing twice the work. If the outlet decides not to cover your event, it is highly unlikely your information will be passed on to anyone else for inclusion in a calendar or listing.

Another critical piece is to think like today’s journalists will be thinking. If your event or story has not only a compelling subject, but also great visuals, mention that in your press release. Print news outlets are thinking video, audio and multimedia, so you have a better chance of getting coverage if you can provide some suggestions for compelling visuals as well as a good story.

5. Personal follow up. Even though it seems like newspapers and magazines are smaller than ever before, they are receiving a great deal more information than they ever did. Much of it goes online where the costs of publishing a story are significantly lower than the cost of ink on paper. But with all the information coming over the transom, yours can easily be misplaced, go unread, get ignored. Don’t underestimate the value of a personal follow up. If you know someone at the news outlet, all the better. If you don’t, go to the website and find an editor’s name. If you call them, there’s a very good chance you will not get through, but you will have the opportunity to leave a message about the “xyz press event” which may jog someone’s memory.

Although there are more media outlets and blogs than ever before, you still can’t minimize the value of publicity in a major news outlet. A brief item in a general interest newspaper is worth a lengthy piece on dozens of blogs combined. And since all news outlets also operate online sites, blogs and special interest microsites, you have a good chance of hitting a fairly wide audience.

It all starts with how well your press release does its job.