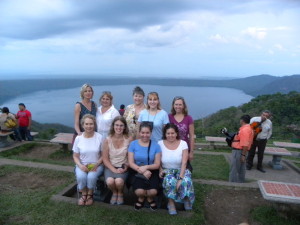 Before heading for the hospital, Patricia and Carol worked together to assemble the group, in full scrubs, for a photo. These two groups have melded seamlessly into one over the past 5 days. In our group meeting, the PINCC volunteers admitted they were skeptical about the  “Dining for Women” volunteers when we came in on Sunday. They´d already had a full week together and were very close, but the lines have completely blurred now and I can sense a gratitude that flows beautifully both ways between all of us.  Ann and Karen have even expressed an interest in joining a DFW group when they get home. Another full circle.

The hospital day typically begins for the PINCC group with a teaching session in one of the meeting rooms, briefing the Nicaraguan doctors and nurses who take written tests, are asked to interpret photos of lesions and suggest treatment plans, and also work on bedside manner and patient etiquette with the U.S. staff. Carol had asked me to share my son´s experience using breath (pranayama) for his spinal taps when he had cancer 20 years ago.  Ross is now 26 and cancer free. The techniques are similar to the LaMaze technique used in childbirth and help patients focus on their breath instead of the procedure and discomfort (a.k.a. pain), breathing in through the nostrils and out through the mouth, very slowly and rhythmically.  It is also a great way to connect directly with patients and offer support.  The doctors were very open to the suggestions and appreciated Ross´s story.  I also slipped in a mudra for relaxation: Prajna Prana Kriya.  You curl the index finger into a small ring and place the index fingernail at the base of the thumb on the inside. It is very effective for reducing anxiety and again, offers another focus that helps the patient remember to relax into the procedure instead of resisting it.

I was agained assigned to Karen´s room (yay!) and the other interpreters headed to the hallways to do patient eduation. Everyone is getting more comfortable with our role as volunteers and finding new ways to help everyday.

By around 1:30 PM, we had seen our last patient and were given a tour of the hospital, which was very eye opening and sobering.  Thehospital was built during the Somoza regime as a private hospital but is now the official teaching hospital for the university.  It does not have air conditioning, except in conference rooms, offices, and a few treatment rooms, has almost no natural sunlight (which naturally kills bacteria)  and is very difficult to clean.  There is an open area in the middle of the building where the generators are housed allowing pigeons access to the hospital corridors on a regular basis. Patients have to bring their own linens upon admission and it isn´t unusual for two patients to share one bed.  Yes. You read that correctly.  When Carol first started coming down to Nicaragua in the 80s, they were still sharpening and re-using needles.

Our first stop was the basement where the Emergency Room is located along with the Pharmacy and Pathology.  I had noticed that our patients were given their specimens to deliver on their own to Pathology with their name scotch taped onto the bottle.  A different level of quality control than we are used to in the States.  The morgue was also in the basement. When our guide, Carmen, asked if we´d like to see it there was an emphatic No, Gracias from the group.  The “mor-gay” was not going to be a part of the DFW tour…..

Maternity was on the second floor.  We walked into a large room which 8 moms and newborns shared together in the sweltering heat.  We wished them congratulations and asked the names of the babies. Ernesto, Gonzalo, Maria,…HILLARY…. and KEVIN!  Lesli, our infectious disease control expert, noticed a used catheter sticking halfway out of a garbage can in the middle of the room and tried to steer everyone around it.  The hospital averages 15-20 births a day, and has a small NICU with incubators, respirators, and monitoring equipment.  More serious cases are referred to the Pediatric Specialty hospital in Managua.

We visited Orthopedics, Med-Surg, Infectious Diseases…, but the most heart breaking area for me was Pediatrics, where the mothers were sitting with their sick kids in crowded rooms, with little to do and lots of time to think.  I expressed the compassion of our group to a couple of mothers wishing them good luck from our hearts to theirs and couldn´t help but imagine my time in the hospital when my own children were ill. The hospital was a refuge for me where I felt safe and supported.  I could barely control the tears as I recognized the fear and pain in these mother´s eyes.  As we left the building, everyone expressed a renewed gratitude for the state of medical care back home.  It´s certainly not perfect, but the standard of care is completely at a different level.

After a long day – a few of us headed to the Museo de Rubén Darío.  Darío is Nicaragua´s most famous poet and he is from León!  The museum is the house where he lived for most of his childhood and is also where he died.  Doctor Sara´s husband and mother-in-law run the museum so she had encouraged me to seek him out and get a personal tour, which we did!  He proudly explained each item in the museum in great detail, from his funerary mask to his writing table.  Darío was sitting on this very curb, writing poetry, at age 6 and is credited with changing the way metaphor is used in the Spanish language.  He was influenced by Poe, Emerson, and Whitman, and spent quite a bit of his life in Spain, Paris, and New York.  We learned about his many lovers and tried translating some poetry that was preserved in the original written form. They also house a small library that is available to university students studying Spanish literature.

As we wound our way back to the hotel, Patricia shared that she had nearly dropped into a pot hole on one of  her errands. Pothole doesn´t accurately describe the state of the streets here.  There are huge holes in the sidewalk that come up at a moments notice, so you have to look down with every step.  AND, the drivers totally have the right of way.  If you try to cross in front of them they beep at you, impatiently.  So walking around is a full on sensory experience!

Carol had arranged dinner at an open air restaurant – where we all sat at a huge table and shared stories, old and new. Dr. Pam´s and Dr. Ilana´s kids ran between rain drops and played games at the end of the table as we waited for dinner. The kids have been a wonderful addition to the group. A true breath of fresh air with all their energy and enthusiams. Two of Carol´s friends also joined us – sisters that have been helping with the intakes in the morning to get patients into treatment rooms more efficiently.  One is a nurse and the other, a biologist.  Fascinating, dedicated women from León.

I´d like to close this blog entry with part of a poem by Rubén Darío that speaks to the emotions that each of us have experienced in our own unique ways here in Nicaragua.  Tears connect our hearts in compassionate caring and often appear when we least expect them.  Thanks for the permission, Rubén.  To tears.