Nicaragua 2012 trip diary: Where the streets have no names 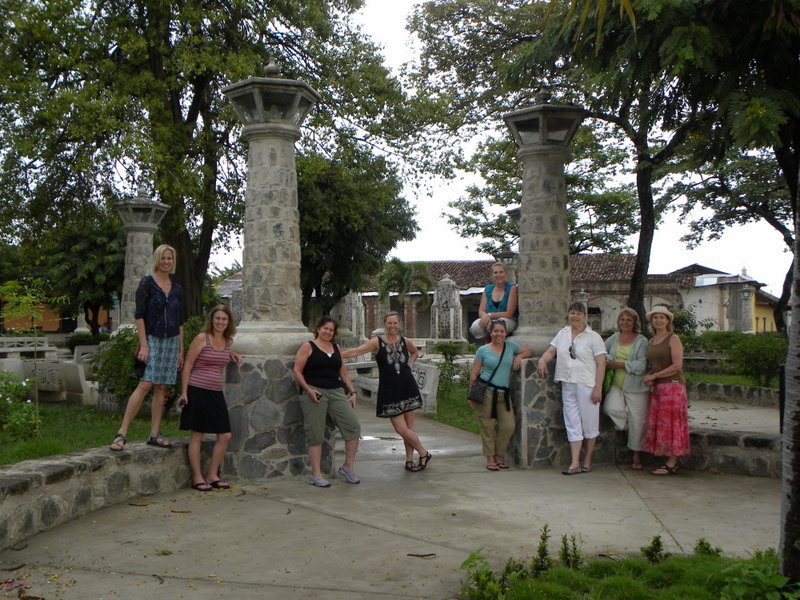 We began the day on the rooftop of the Hotel San Francisco, connecting our DFW hearts and minds with a gentle yoga practice overlooking the city of Granada. It felt so good to move and breathe together.  I taught the group Trimurti and Yoni mudras (hand gestures associated with the feminine body, mind, and spirit), uniting our intention of women helping women, as we headed for Leon and the beginning of our true meaning for being in Nicaragua, our medical mission with PINCC, or Prevention International:  No Cervical Cancer.

A quick stop the Masaya Market, and then we’re off for Leon!  Our driver pointed out the iguana hunters along the side of the highway,selling their wares to passing motorists!  Patricia wanted to know how they prepare the meat, what it tastes like, … so I was kept busy for the entire ride translating sentences I never dreamed would need translation!  A quick roadside stop for the local specialty – quesillos – brought us to Leon around 1:30.  By 3:00 we were assembled as a Medical Mission Team, having joined with the PINCC volunteers in the lobby of our hotel.  The group is lead by Carol – a veteran nurse and midwife that has done amazing work here in Latin America and beyond. There are two female Ob-Gyns, both from Tucson, who brought their children (ages 3-8) and husbands ( a.k.a. amazing caregivers and supporters of the PINCC mission) with them.  There are also two Nurse Practitioners and an interpreter with the PINCC group.  They spent the previous week doing a similar training in El Salvador – so they are our experts!

We were divided into 3 groups:  Medical Staff, Interpreters, and Support /Data Entry.  There were 4 of us in the Interpreting group – my group.  Sally quizzed me on the intake form, asking me to translate from my Spanish PINCC manual to English, checking that I could understand the vocabulary. The first few questions seemd obvious.  Date.  Name.  Address.  But wait!  BTW.  They don´t use written addresses in Nicaragua.  What?  Bono was singing about a real place in the song Where The Streets Have No Name?  And now it will be my task to figure out how to write an address in a country where that song lyric is a reality?

Places are described in relation to a famous landmark.  East of the landmark is arriba (up – because the sun comes up in the east), and west of the landmark is abajo (down – because the sun goes down in the west).  So our hotel is two blocks up from the Concepcion Church.  Dos cuadros arriba de la Iglesia de la Concepcion.  That seems simple enough.  Yeah, right.  But not if you´re talking about Tio Jorge´s store, or where the Coca Cola plant used to be in Managua.  You have to KNOW the main landmarks to navigate FR0M them.  Ironically, the streets do display names – “But nobody pays attention to them” , says Carol with a flip of her hand.

As I continued with my translation of the intake form, the questions became more and more personal.  Do you drink?  Smoke?  And then it jumped to some of my new vocabulary words like genital warts, condoms, and methods of family planning, touching on topics from number of sexual partners to whether they have had an AIDS test.  When we got to some of the abuse questions, my heart filled with tears as I imagined asking these personal questions and holding each patient´s personal answers.  PINCC has secured a psychologist to counsel women who would like to have a consultation – which they usually decline. This will certainly be an emotional journey for all of us, on many levels.

We shared a simple dinner of pizza in the hotel lobby and head to bed by 9:00, eager to begin our true mission tomorrow morning at 8.