“We do on stage things that are supposed to happen off.  Which is a kind of integrity, if you look on every exit as being an entrance somewhere else.”
— Sir Tom Stoppard, British playwright

Bond Street Theatre uses unique and creative programming to serve imprisoned Afghan women and girls who face grave challenges both in prison and following their release.  The organization uses theatrical skills to empower these marginalized women and prepare them to return to Afghan society.

The mission of the Bond Street Theatre is to promote peace and mutual understanding through the arts. Their theater programs focus on education, healing and empowerment in conflict zones and critical areas worldwide. They also provide teacher training, programs for women and youth, and build creative collaboration with local artists.

Despite Afghanistan’s constitutional guarantees of gender equality, Afghan women and girls often face discrimination in the judicial system. Many cases are tried in tribal courts, where adherence to the national law is less strict. Many of the crimes women are charged with are “zina” crimes, or crimes of morality, such as running away from their marriages, fleeing domestic violence or being the victim of rape. According to Human Rights Watch, the incarceration of women tripled in 2004-2006 and more than half were tried for moral crimes.

After serving their sentences, formerly incarcerated women are often without a home.  Some prefer to remain in prison after their sentence is complete rather than face abuse and stigma in their former community.  If they are allowed to return home at all, they risk brutal punishment or death at the hands of relatives.  Women are often forced into prostitution or begging to survive.  Under the current system, incarcerated women and girls lack the guidance to rebuild their self-esteem, find a voice and the confidence to express their views. They cannot develop the motivation to build a new life on their own in a deeply family-oriented society.

With over a decade of experience working in Afghanistan, Bond Street Theatre’s CAPP program will provide creative education programs that build self-esteem, encourage women to speak out, improve life skills and develop the motivation necessary to ensure successful re-entry into society. 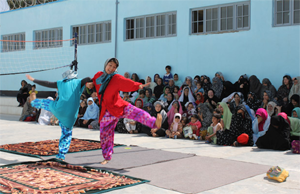 CAPP will conduct 136 workshops affecting women and girls in the Herat Women’s Prison, Herat Juvenile Correction Center, and in women’s shelters in Herat.  These workshops provide an outlet for women and girls to explore their roles in Afghan society.  This educational and motivational information is a permanent part of their life experience and will have a positive effect on their re-entry into society as strong individuals and potential change-makers.

Workshops will be conducted in partnership with Afghan women’s theater groups (Art Partners) that have been created and trained by Bond Street Theatre over the past four years. All programs are arranged with the cooperation and approval of the Afghan Ministries of Education, Justice, Culture, and Women’s Affairs.

The CAPP program will:

In bringing the model program to the attention of local authorities and ministries, CAPP has the potential to make lasting improvements to the restorative process of incarcerated women, and introduce effective creative programming into the wider Afghan justice system.

A long-term goal of the program is to see the project incorporated into the rehabilitative process in all women’s prisons in Afghanistan, and sustained by the incarcerated populations themselves.  The CAPP project in Herat Province will serve as a model, with the potential to expand the program to women’s prison facilities in Kabul, Nangarhar, Kunduz, Bamyan, Kandahar, and Mazar-i-Sharif if funding became available. 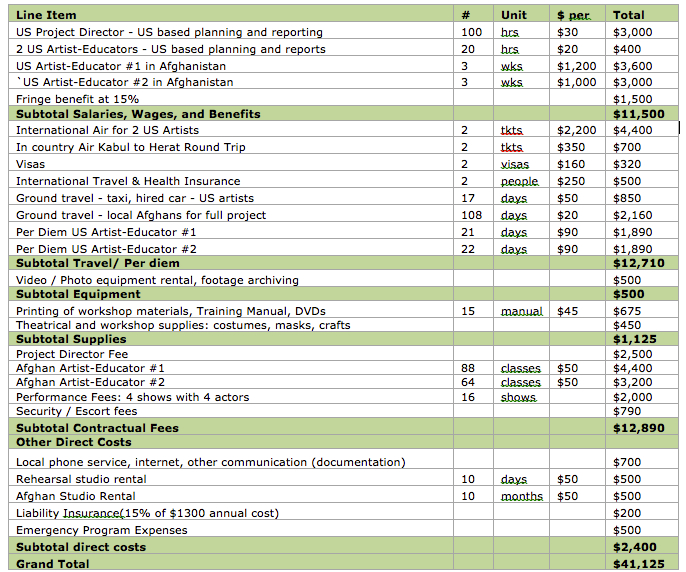 DFW’s one-year grant of $41,125 will pay for salaries/wages, travel for US artists, equipment, workshop materials and supplies, contractual fees and other direct costs. The program  will directly impact 150 women at the Herat Women’s Prison, 60 girls at the Juvenile Correction Center, 30 children who live with their mothers at both facilities, 200 women at shelters in Herat, 40 staff members of the prison, shelters and facilitating NGOs and 25 artists and trainees of Simorgh Theatre group.

Why We Love This Project
The population served and their experiences are unique and foreign to the general American public. There is great potential for educating our members on this population, the challenges they face, and the use of theatre in empowering women. Bond Street Theatre has received a McArthur Award for Creative and Effective Institutions.

Bond Street Theatre has a long and successful record of presenting their social development theater programs at women’s prisons and in other venues.  They have aided more than 50 non-governmental organizations working for peace and social improvement on four continents in the last decade. Their accomplishments in Afghanistan alone include: 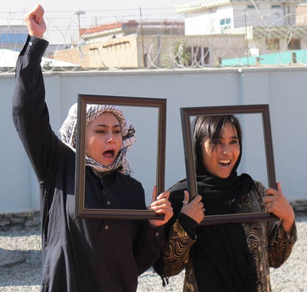 Bond Street Theatre was founded in 1976 by a group of actors and directors dedicated to socially responsive theater and motivated by an awareness of global issues. The company studied the physical and gestural arts of many traditions to develop a theatrical language that easily communicates across cultural borders. Today, the organization continues its commitment to social improvement and the peaceful resolution to conflict globally and, to that end, has conducted programs in more than 40 countries.

The company works in post-war environments and areas of disaster and poverty, and focuses on the issues facing women and children. Bond Street creates programs to empower, inspire, and assist women and children by promoting their rights, by working with men to raise their awareness, and by advocating on behalf of women in each target country.

The company has a three-part strategy to engage communities:

1. Collaborate on a peer-to-peer basis with local theater artists, arts organizations, and aid organizations in each region in which they work.

2. Design theater programs to suit the needs of each target group, from street-working children to rural women to refugee populations.

3. Train artists, educators, trainers, parents, and other stakeholders to continue these techniques to maximize sustainability and impact.

Afghanistan is a mountainous land-locked country located in central Asia.  Known officially as the Islamic Republic of Afghanistan, it has a history and culture that goes back over 5,000 years.

After three decades of war, occupation, drought and constant displacement, Afghanistan is starting the long process of recovery. Afghanistan has been in conflict since it was invaded by Russia in 1979, which was followed by a decade of civil war and Taliban rule, precipitating the US invasion and war in Afghanistan. Afghanistan needs help now more than ever.