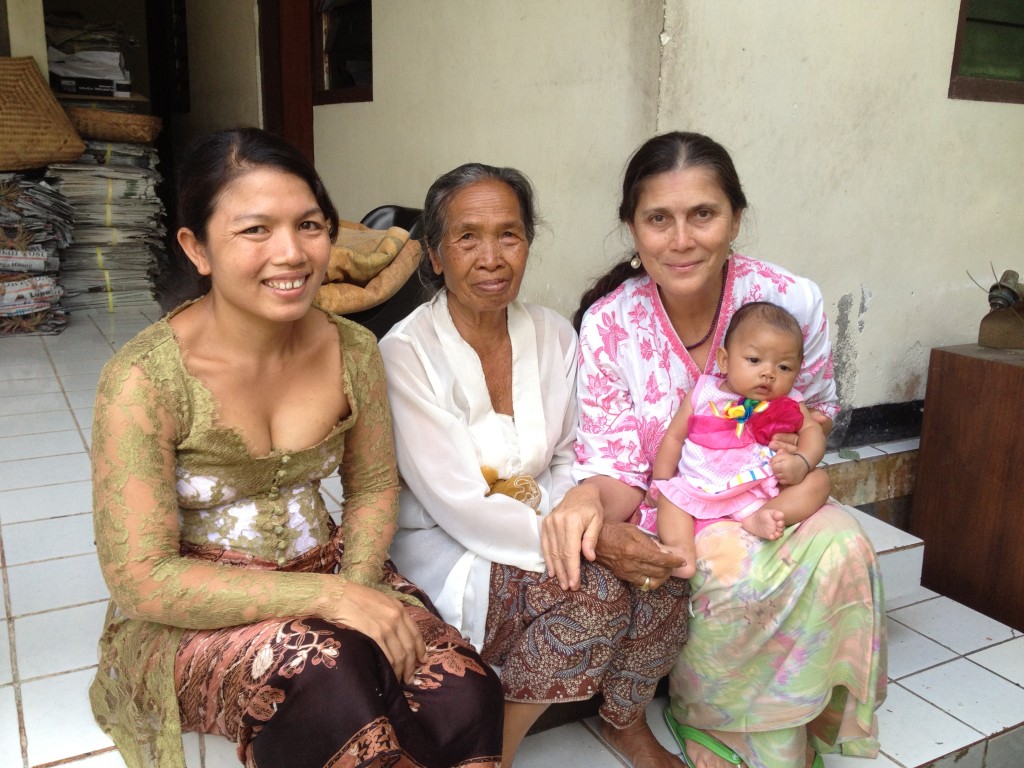 Bumi Sehat means Healthy Earth Mother. This month’s featured organization believes that access to quality healthcare, especially reproductive healthcare, is a human right. They believe that each individual is an essential societal component of peace, and that by supporting women with dignity and respect in the process of childbirth, a foundation for peace is built, one woman, one child at a time.

Their service is built on three principals: Respect for Nature, Respect for Culture, and Wisdom in Medicine.

Dining for Women’s $45,000 grant to Bumi Sehat will pay the salaries of 11 midwives and provide most of the medicines and supplies to support the approximately 480 women who will give birth at the clinic over the course of a year.

While Bali is not regarded as a disadvantaged province, access to basic healthcare remains a problem, as shown by the island’s high maternal mortality rate. The province recorded that 84 mothers died per 100,000 deliveries in 2011, up more than 47 percent from 57 deaths in 2010.

Poor and rural women in Bali often do not seek adequate reproductive health services for a number of reasons – economic, cultural, limited access due to lack of transportation, and fear of abuse in medical settings. Reproductive health care requirements are many:

The poorest women are most affected. An example provided by Bumi Sehat is Ibu Komang (not her real name), whose husband died of AIDS when she was 38 weeks pregnant. The couple had been mutually exclusive sexually. Neither had ever been raped. But her husband suffered a ruptured appendix 10 years earlier, requiring a blood transfusion. Because they are very poor, they did not pay the extra $60 to have the blood screened for blood-borne disease. This is how he contracted HIV. Komang and her baby are also HIV positive. Bumi Sehat supports them in many ways, including counseling and transportation to get her anti-retroviral medication prescription filled each month (a 2 to 3 hour trip by car). They also help Ibu Komang financially as she has no income. Bumi Sehat makes it known that if a patient needs a transfusion, they willingly pay the extra $60.00 per pint of blood, to have it screened for diseases.

The Bumi Sehat model is based on compassionate, culturally appropriate, gentle, kind, free, woman-to-woman, midwife-to-mother care, including free transport to and from the clinic any time of day or night if needed, 24/7 365 day each year. It solves many of the problems women face when seeking reproductive healthcare. Through this woman-friendly model of care since 1995, Bumi Sehat has begun to effect positive changes on the entire medical community and methods of practice, softening other medical professionals to be more woman and child friendly. Many women suffer complications that could be life threatening. Bumi Sehat midwives handle these events calmly and skillfully, while maintaining respect for each woman — often the new mother and her family do not even know how close a call it was. 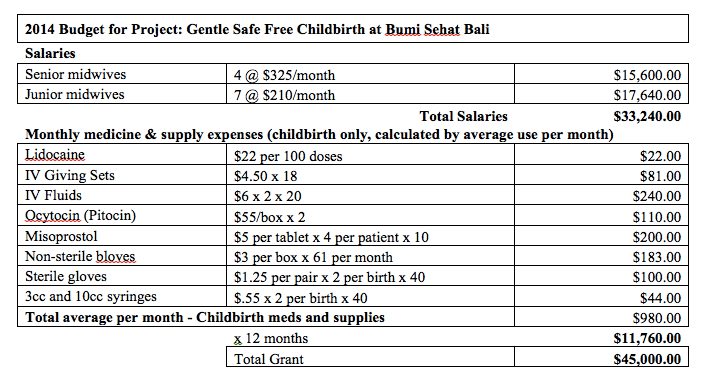 All actual expenses of life-saving medications and medical supplies used in childbirth are calculated by average use per month, which can vary depending on the numbers of births and related emergencies.

Note: Not all of the midwives employed by Bumi Sehat are included in this budget. They are open 24/7 so there are three shifts per 24 hour day to fill, with qualified medical staff, midwives, and nurses (Allopathic physicians are part time).

Why We Love This Project
Bumi Sehat incorporates homeopathic methods along with standard medicine to ensure the safe and humane treatment of women before, during and after childbirth.

Since 1995, the Bumi Sehat midwives have demonstrated that what women need and want is the safest way to have a baby.

In 1992 to 1993 Robin Lim, a childbirth author, teacher and aspiring midwife, was pregnant in Bali. She sought reproductive healthcare and found it difficult to get kind, quality, woman-friendly care on the island. She learned that at that time hemorrhage after childbirth was the leading cause of death in Bali. Lim believed these deaths of women having a baby, in the prime of their lives, were due to malnutrition, inaccessibility of quality reproductive healthcare, and were driven by the fact that women were not prioritized in Bali society.

Lim set up the first Bumi Sehat clinic in 2003 to deliver safe, quality, kind, hygienic, natural, culturally appropriate reproductive healthcare as a human right, to each patient that arrives. The midwives of Bumi Sehat have made the clinic a Mother-Baby Friendly Demonstration site. Midwives from Indonesia and all over the world come to learn effective, woman-friendly protocols. In 2012 the Bumi Sehat Midwives Education Outreach program gave Gentle Safe Childbirth seminars to 7,600 Indonesian midwives.
Bumi Sehat is licensed by the Dinas Kesehatan (Dept. of Health). It has many awards, including “Best non-for-profit organization in Indonesia in 2006. Robin Lim (Executive Director and midwife) received the CNN Hero of the year Award in 2011.

Indonesia is the world’s largest country comprised solely of islands – there are 17,508 islands in the archipelago, some 6,000 of which are inhabited. Indonesia is now the world’s third most populous democracy, and the world’s largest Muslim-majority nation.  The island of Bali is home to most of Indonesia’s Hindu minority. According to the 2010 Census, 84.5 percent of Bali’s population adhered to Balinese Hinduism,12 percent to Islam.

Most of the Balinese people are involved in agriculture, primarily rice cultivation, and double- or triple-cropping is common. Fruits, vegetables, and other cash crops are also grown, although in small amounts, and a significant number of Balinese are also fishermen.

The eight Millennium Development Goals (MDGs), which range from halving extreme poverty rates to halting the spread of HIV/AIDS and providing universal primary education, all by the target date of 2015 – form a blueprint agreed to by all the world’s countries and all the leading development institutions. The goals have galvanized efforts to meet the needs of the world’s poor. The UN is working with governments, civil society, and other partners to build on this momentum and carry on with an ambitious post-2015 development agenda