Project Soar’s mission is to empower marginalized teen girls to become the leaders of today and tomorrow.

Moroccan teen girls are at high risk of underage marriage, which makes them vulnerable to dropping out of school, early motherhood, and gender-based violence. COVID-19 has worsened the situation. In 2019, 32,000 requests for marriage to minor girls were issued, making it one of the country’s primary challenges. In 2020, 14 percent of girls married underage. Although recent laws were amended to stop child marriage, legal loopholes persist, curtailing girls’ participation in school and limiting their prospects for careers.

The World Economic Forum’s Global Gender Gap ranked Morocco 143 out of 153 countries in 2020. Younger women and girls bear the brunt of the unfortunate brutality: 59 percent of Moroccan women and girls ages 15 to 24 have been victims of psychological, physical, or gender-based violence, compared to 16 percent for women ages 55 to 74. 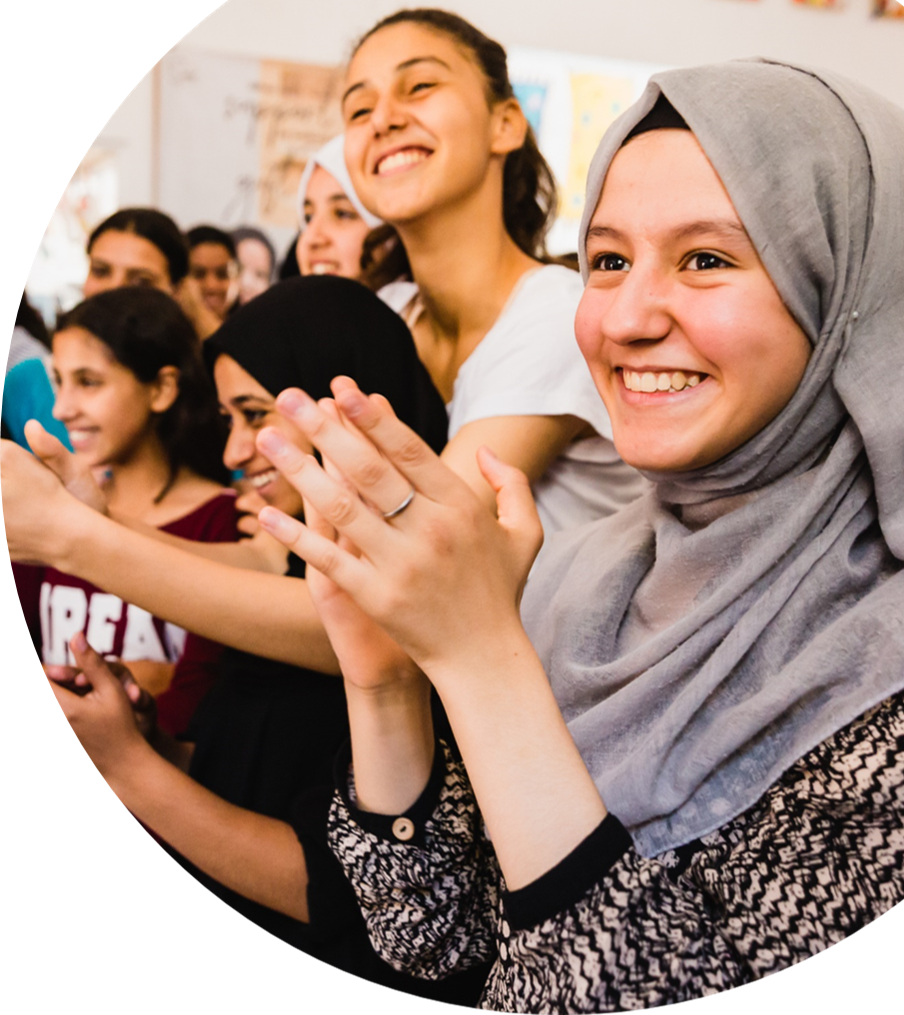 There are three primary factors causing the high rate of underage marriages in rural Morocco:

While the feminist movement is robust in Morocco, it is led by French-speaking, middle-aged women in upper middle class urban areas, primarily Casablanca and Rabat. The movement has little representation from teen girls, Arabic-speaking females, or working-class women. The feminist movement has focused on changing laws, rather than culture, with limited means or interest in engaging the grassroots. Additionally, the movement has become politicized and fragmented, with factions having strong connections to political parties.

Project Soar’s (PS) single focus is supporting teen girls in the most marginalized communities. The Girls Soar in Morocco (GSM)’s Leadership Training Program for Marginalized Teen Girls will help 200 vulnerable girls stay in school, avoid child marriage, and gain skills for future employment. This program enhances girls’ leadership skills through the establishment of empowerment workshops and Girl Leader Clubs (GLC). It helps girls overcome cultural barriers, lack of parental knowledge, and financial constraints. It also proves that putting girls on a productive path and freeing them from violence, teen pregnancy, and child marriage helps lift them and their families out of poverty.

Project Soar works. According to data collected in 2020 from 675 PS girls across 40 locations in Morocco: 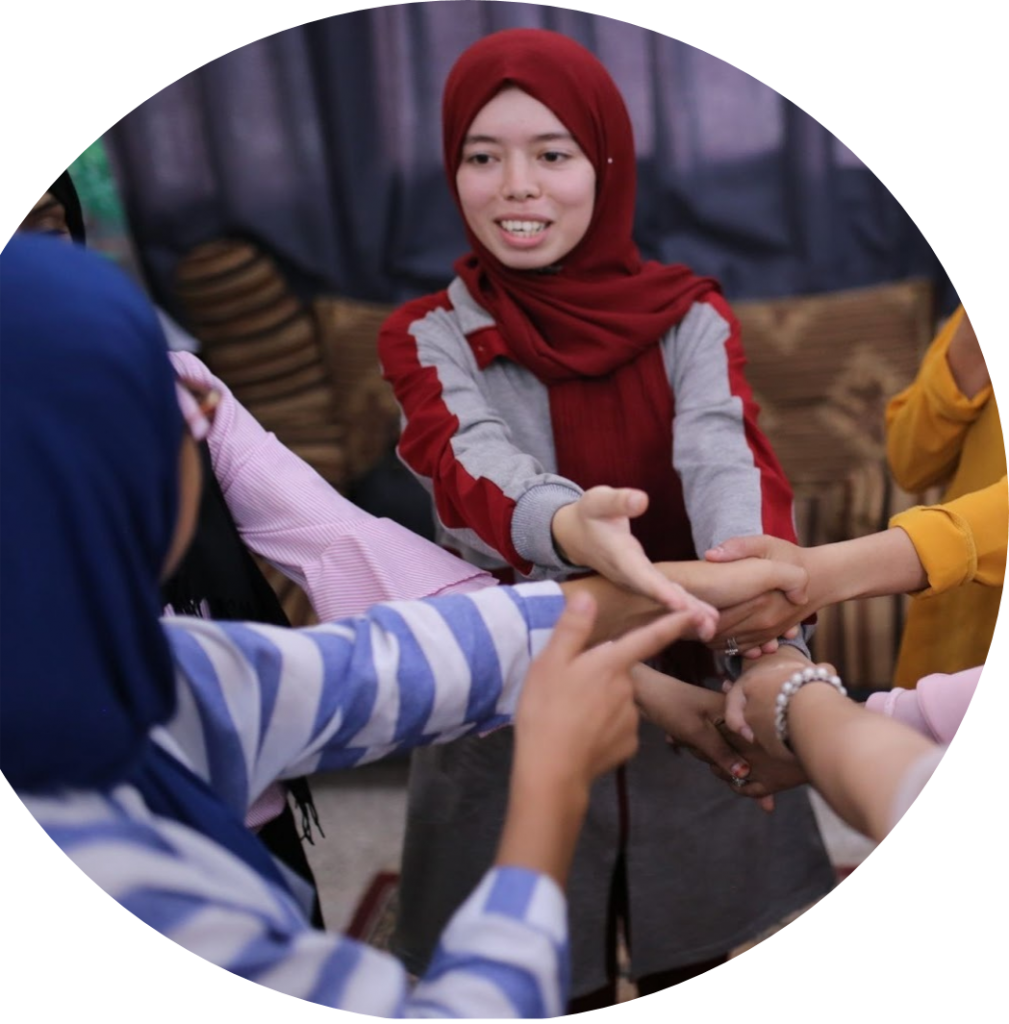 GSM will directly benefit 220 women and girls: 200 public schoolgirls plus 20 women facilitators. The expectation is that there will be 330 indirect beneficiaries. PS estimates that each girl and facilitator will share information with 3+ people in their families, communities, youth houses, or schools, and that 220 of these beneficiaries will be women and girls.

PS doesn’t believe in quick fixes. It provides a holistic program that helps girls realize their potential and forge their own paths. PS’s award-winning curriculum encourages girls to use new learned skills in their daily lives and to prepare for productive futures. The five key components of the Girls Soar Morocco (GSM) program are:

PS is a data-driven organization. It tracks its impact, both qualitatively and quantitatively. GSM will actively incorporate Measurement and Evaluation into the program, tracking project inputs, outputs and impact. Internal data collection will take place monthly, with inputting into the PS customized database system and reporting on a quarterly basis. Final reporting and evaluation will take place during the final month of the program and will include lessons learned and program beneficiary feedback. Materials and curricula will be updated based on feedback.

PS maintains key partnerships, including the Moroccan Ministry of Youth and Sports, which provides credibility, government protection, and troubleshooting nationwide. Through its partnership with Dar Chebabs/Youth Houses, PS has guaranteed access to a network of government Youth Houses across the country that provide free safe space for GSM activities. PS also has a strategic partnership with the United Nations Population Fund (UNFPA) Morocco to promote menstrual rights for teen girls. PS co-held the first national menstrual rights event with key Moroccan ministries on the Rights and well-being of adolescent girls in public policies in Morocco. This launched a nationwide advocacy campaign to combat period poverty and dispel misconceptions about menstruation. PS also partners with the El Khair Association for People with Disabilities to pilot the PSB program for girls with a wide range of disabilities, developmental delays, and neurodivergence.

Together Women Rise’s grant of $50,000 will help fund the following: 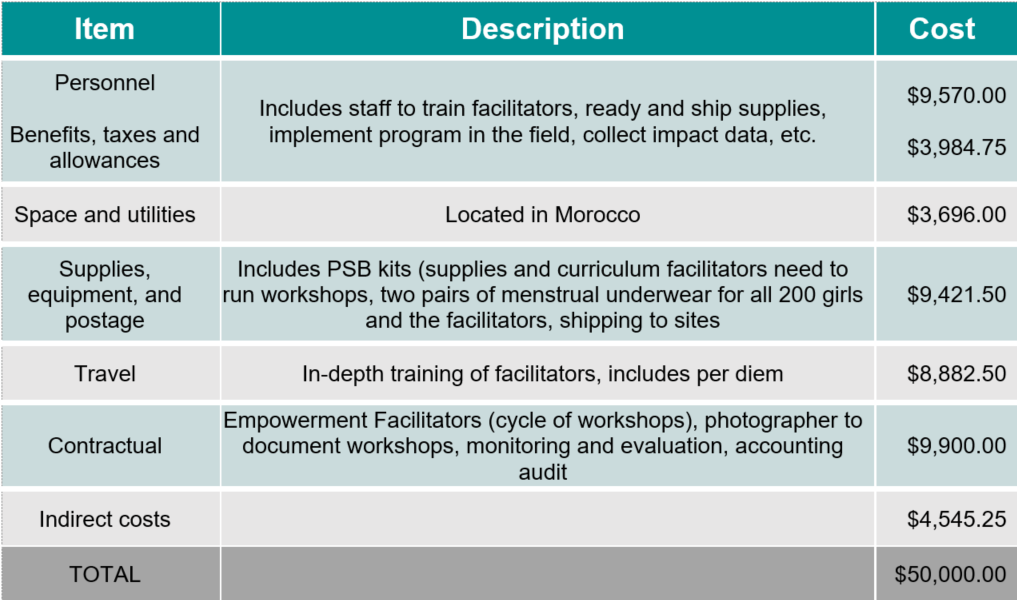 Why We Love This Project
The Project Soar Solution is a holistic, rights-based approach to propel young girls to forge their own path and soar. Its unique, 25-workshop empowerment curriculum focuses on five modules: Value, Voice, Body, Rights, and Path. The focus on helping marginalized teen girls, some with disabilities, to become their own change agents has been highly successful in challenging gender norms, overcoming barriers to higher education, and creating the leaders of tomorrow. 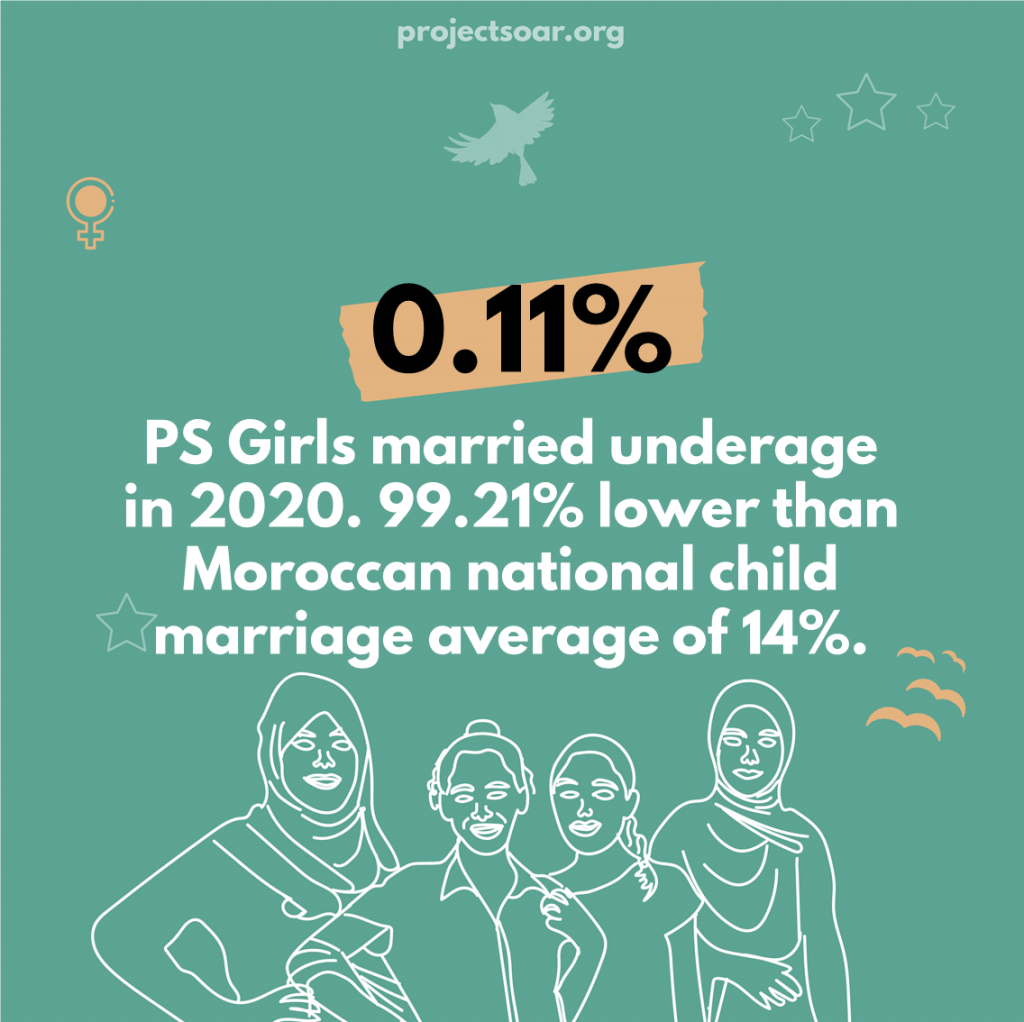 The Project Soar Solution has been recognized and lauded by a wide variety of individuals and organizations.

The Moroccan government has reviewed and approved the PS curriculum and invited PS to become an Association of Public Utility because of its strong results-driven performance.

“My thoughts, behavior, and studies have totally changed since Project Soar. I started thinking positively rather than negatively. I started applying myself more in school, which has resulted in better grades.” – Salma, age 15 (PS Girl 2020/2021)

“I was having trouble playing sports. I was always worried that I would have leaks if I did certain moves. However, now I can say that the Be Girl period kit that Project Soar provided me in Module 3: Body helped me to somehow face this fear and live a normal life.” – PS Girl

“I don’t want to marry him!” Dounia begged. Her family’s response: months of isolation. “They were entirely against my decision,” she explained: “My mom never spoke to me, my brother and father acted as if I didn’t exist, and even my younger sister told me to marry him!” Dounia wanted to stay in school and continue her education. She didn’t want to become a child bride. “I didn’t know how long I could last before I was married…My relationship with my family was horrible. I was lonely, and I didn’t know what to do. It was then I found Project Soar.”– PS Girl 2019/2020)

(At PS, Dounia learned about the law and her right to be free from early or forced marriage. Dounia’s relationship with her family has improved so much since she became a PS Girl. She challenges her parents to understand and respect her choices. With PS support, Dounia has successfully altered her future. In March 2020, Dounia traveled to London to receive the With and For Girls Award on behalf of PS.)

At Project Soar, we are learning to value ourselves as highly as boys. Thanks to Project Soar, I know that girls are just as valuable as boys. We have worth beyond working in the kitchen and staying in the house.” – Fatimaezzahra

“I have never been this confident. I trust that I can do anything I want. I love my body the way it is. I will never let anyone dictate what I should do.” – Salwa 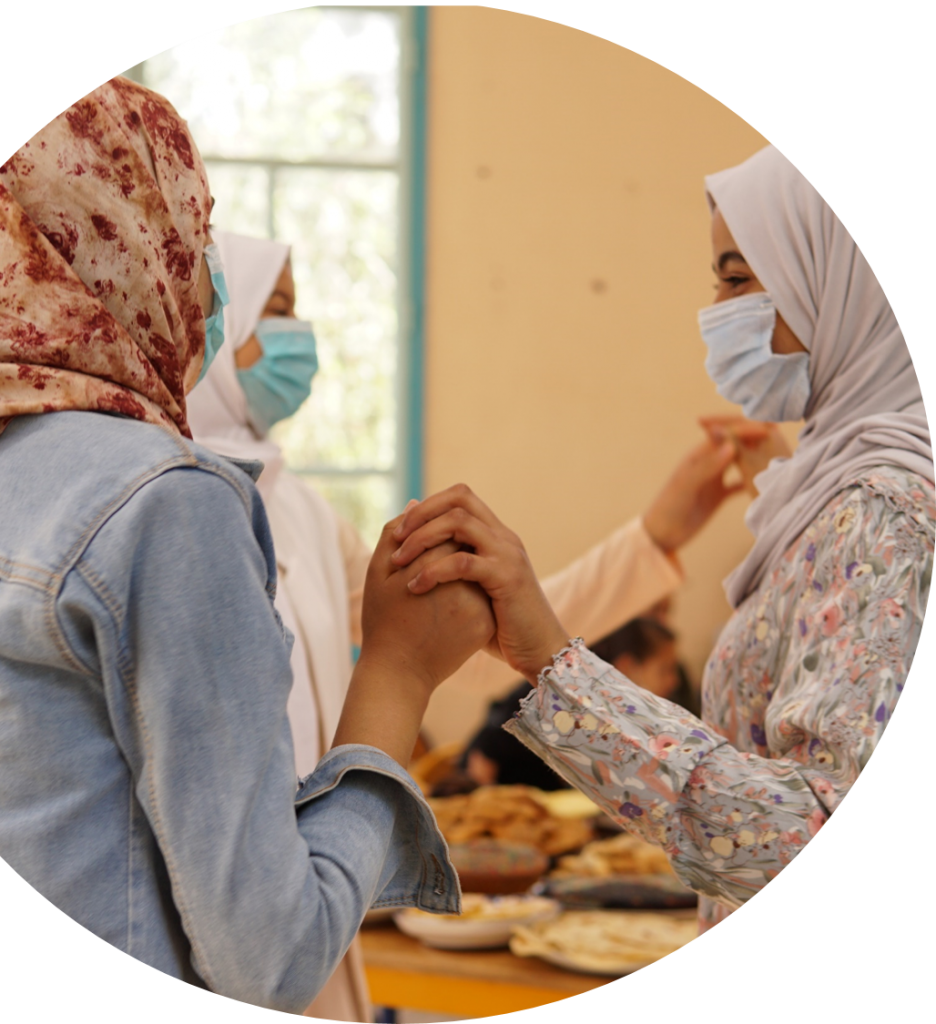 “Before Project Soar, I was afraid of standing in front of my classmates because I thought they’d laugh at me. After the PS workshops, I completely changed. I became more confident. I don’t care anymore about other people’s opinions or worry if they’ll laugh at me. Now, I raise my hand in class and participate often. When I began to speak in front of others, I realized people do truly listen to what I have to say. As soon as I began to recognize my value, others did too.” – Imane

“Project Soar helped me to learn how to change negative things in my life to be positive. I am special because I can do anything.” – Fatima Zahra Louiza

“I have learned a lot of things from the whole program. I now know how to fight for my rights, how to be confident, and finally translate my thoughts into words in a speech.” – Jihane Hadri

“I used to think my ideas were worthless. I thought my classmates would laugh if I ever spoke. None of this turned out to be true. In fact, I have a strong voice and I am heard when I use it. I know people will listen to me because I have value.” — Aicha

Project Soar is a charitable organization that supports the next generation of the feminist movement in Morocco. It was founded in 2013 by Maryam Montague, an international development specialist and feminist social entrepreneur, to give back to the semi-rural Moroccan village where she lives. The organization has now grown to chapters nationwide. PS has provided 200,100+ hours of empowerment workshops for 3,543 teen girls and is active in 22 Moroccan chapters and five Ugandan chapters. The Project Soar Solution is the first of its kind. 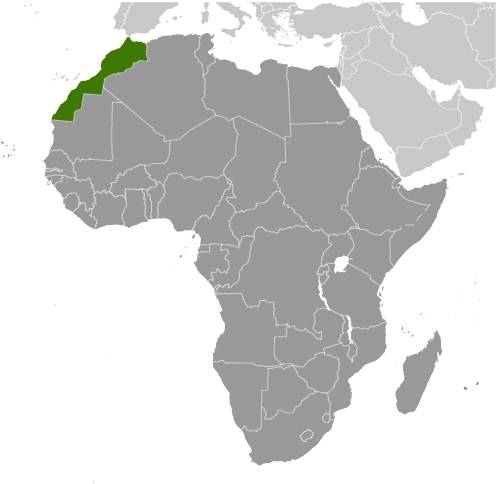 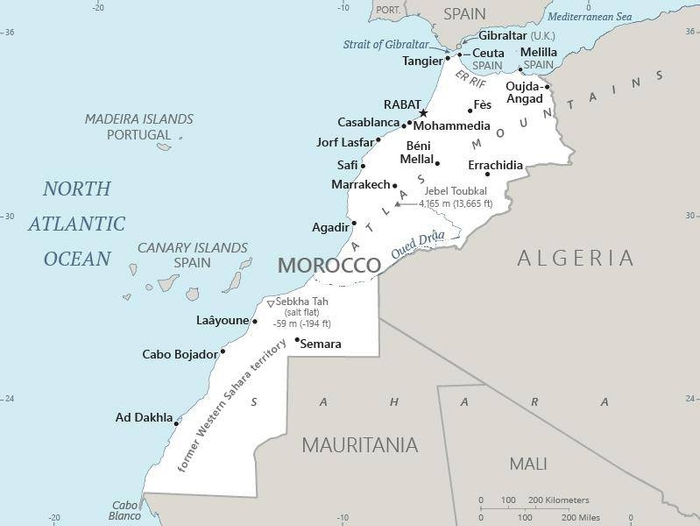 Morocco is a lower middle-income country in North Africa, population 36.6 million. About two-thirds live in urban areas such as the capital city of Rabat. Almost everyone has an Arab-Berber ethnic background. Apart from classical Arabic, the language of education, administration and media, the daily language in Morocco is Arabic dialect called Tamazight, which varies by region. Most Moroccans speak French and many speak Spanish and English. Islam is the official religion and virtually everyone is Muslim. Access to mosques and holy places is forbidden to non-Muslims. Seventy-four percent of the population is literate.

Morocco is currently experiencing a shift in demographics. The population is growing but at a declining rate, a reflection of people living longer and women having fewer children. Infant, child, and maternal mortality rates have all gone down, although a disparity exists between urban and rural areas. The fertility rate is less than half what it was in the 1980s, with an average of 2.2 children born in 2010 and five in the 1980s. This is due to higher contractive use (71 percent today), delayed marriage, and an increased level of female educational attainment. During the mid to late 1900s, Morocco became one of the world’s top emigration countries, with many people moving to Western Europe. In the 1970s and 1980s, many second generation Moroccans became naturalized citizens of their host countries.

A closer look at the effect of girls’ after-school clubs

After school groups and clubs are a way for girls to connect on a whole new level. These safe spaces usually mean “girls-only” meeting places and are an important way to help girls develop positive relationships and talk through issues that are otherwise often off limits at home. The key here is that these gathering places emphasize a sense of community versus individuality – which is often unlike what is experienced in Western culture.

Researchers have found that girls’ clubs that include a time for self-reflection and questioning the status quo help combat discriminatory and oppressive gender norms. This is especially the case when the questioning is led by trained female mentors who create a welcoming and safe environment for honest reflection. Researchers have found that girls exposed to this kind of environment experience positive changes in attitude and are more likely to report incidences of violence compared to girls who did not participate.

Opening up a dialogue about sensitive issues such as sex and relationships requires a skilled, female leader, preferably one who is an integral part of an already-established school or community group rather than an outsider who is unknown. Data confirms that giving girls a chance to rise out of abject conditions often starts with education – and that education often includes a safe space where a girl can open up about the inherent difficulties in her life. 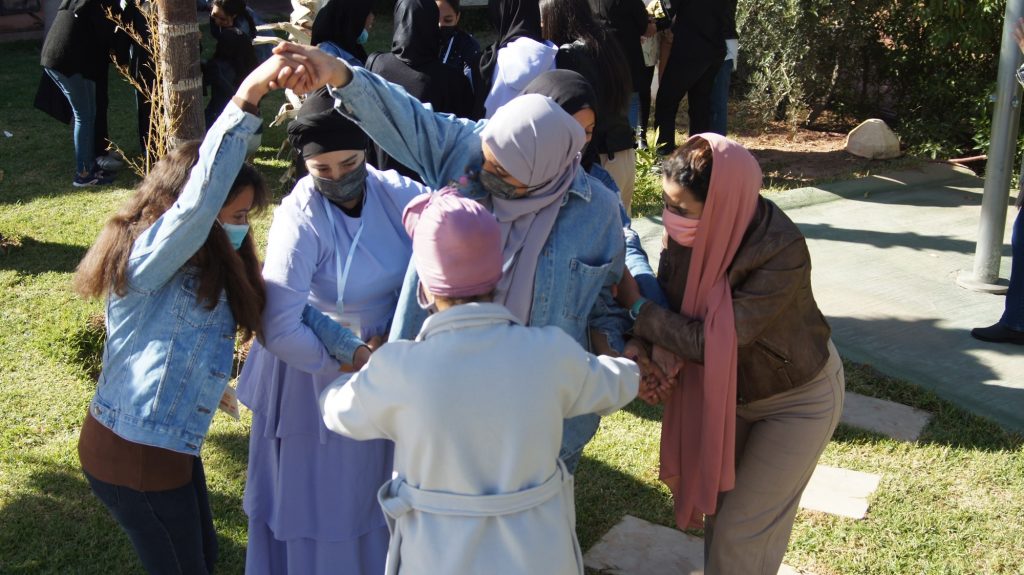