Women’s Microfinance Initiative (WMI) is a nonprofit organization run entirely by women who identified a need and found a smart microfinance solution that transcends the pitfalls of more traditional approaches. WMI eliminates middlemen, provides loans without collateral or interest, and provides training and support to ensure women stay in business. With its approach, WMI gets 100% repayments on loans. Repaid loans return to the loan pool for the next borrowers, thus making the loan process self-sustaining. Rather than continue to apply a top-down approach to alleviating poverty, WMI has developed a bottom up approach to changing the economic paradigm. With a small loan fund and a defined path to integrate women into the formal economy, WMI has created an environment for profound social change.

The Women’s Microfinance Initiatives addresses Millennium Development Goal #3: Promote gender equality and empower women. The eight Millennium Development Goals (MDGs), which range from halving extreme poverty rates to halting the spread of HIV/AIDS and providing universal primary education, all by the target date of 2015 – form a blueprint agreed to by all the world’s countries and all the leading development institutions. The goals have galvanized efforts to meet the needs of the world’s poor. The UN is working with governments and other partners to build on this momentum and carry on with an ambitious post-2015 development agenda.


Life Challenges of the Women Served

In the three-country, remote areas of East Africa (Uganda, Kenya and Tanzania) where WMI operates, an estimated five million impoverished women are living in villages where they have no access to financial services. Over 90 percent of people in these developing countries are self-employed. Without access to financial services, these rural women have no opportunity to start a business to help their families. They and their families are mired in an unbroken cycle of economic isolation that condemns them to a subsistence existence.

WMI works in small agricultural villages where roads are dilapidated, distances are great, and transportation is expensive. There is no electricity. The economy is cash-based, with new borrowers reporting per capita income of less than $1.25 per day. Many WMI borrowers are AIDS widows, caring for 6 or more children, often not their own. They may be illiterate. They often live in mud-floored houses. Healthcare and sanitary living conditions remain an issue. Families have little savings for emergencies. Village women are extremely hard working, have strong entrepreneurship instincts and leadership qualities, and work cooperatively together. Though not formally educated, they are natural businesswomen: intuitive, innovative, market savvy and able to adjust quickly to changing market conditions and opportunities.

Traditional aid organizations generally bypass the rural areas where WMI works because of the remoteness, lack of infrastructure and high cost of distributing services. 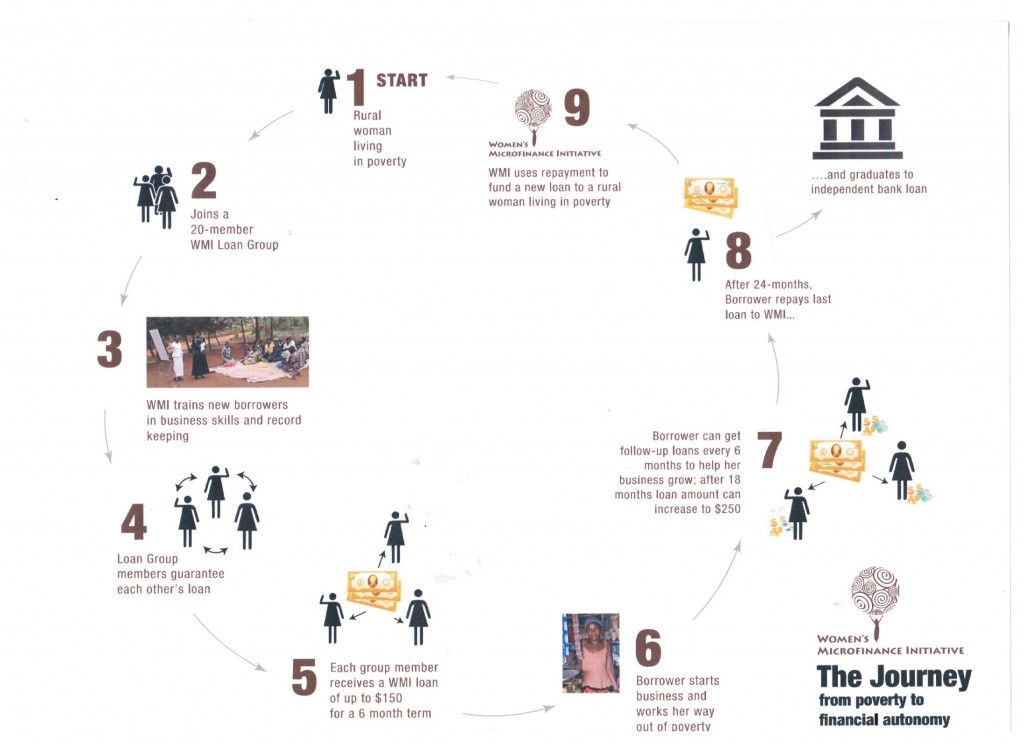 The expansion of the Buyobo loan program will serve up to 320 women in two year cycles. Repaid loans will be lent to another group of 320 women. The indirect impact is estimated to be at least 2,300 villagers including immediate family, extended family, business suppliers, and potential employees. DFW’s grant will pay for salaries/stipends, operational supplies, loan issuance/training costs, and capital for the loans.

The impact of the program is impressive

The loan program is composed of four key components: 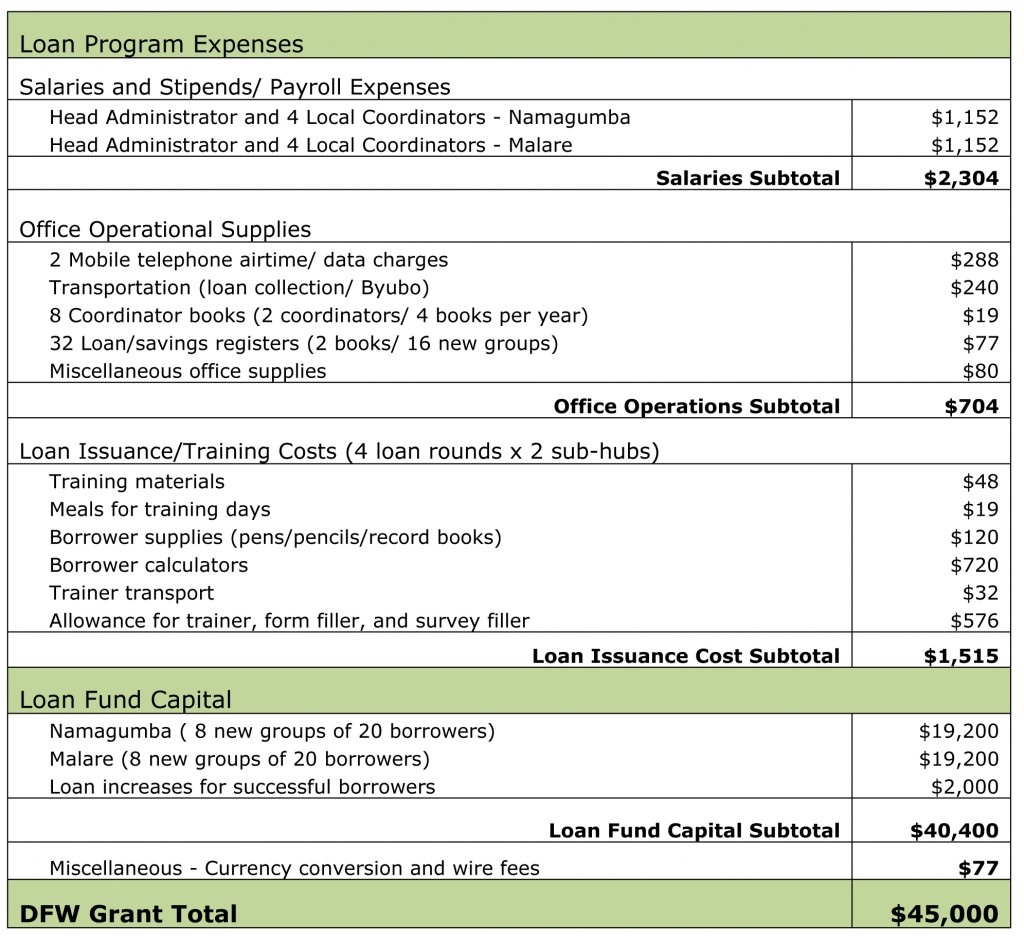 DFW’s grant of $45,000 over one year will help fund a permanent, revolving loan fund that will initially help 320 women, but after two years when the women graduate and repay their loans, the funds will be re-lent to another 320 women. The cycle will continue indefinitely.

Why We Love This Project
We love this program because it is an all-woman organization that successfully supports women toward financial independence. WMI delivers a triple bottom line: women are given the means to operate sustainable businesses, they become empowered as community leaders, and banks change the way they deal with rural women, admitting them to the formal banking environment. Promising participants in the programs may become staff members. Further, domestic violence is reduced because WMI encourages women to involve their husbands and family members in the business, and women gain respect in both the household and the community when they are proven money-earners. As a woman’s financial circumstances improve, she is not only better able to feed, clothe, and educate her families, but she is also able to save for emergencies. Families are healthier and happier. Children are educated and the cycle of poverty is broken.

In the years since WMI launched its first loan group, more than 30 loan groups have been launched. Beyond

the success of the loans, there are additional signs that women are enjoying higher status in their communities as reported by Olive Wolimbwa, WMI in-country director: 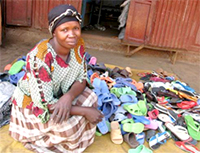 Fareeda Mahyali was barely making a living in the dirty and difficult business of making charcoal when she got her first WMI loan and was able to switch to selling shoes. When Fareeda got her WMI loan in 2011 she bought an inventory of shoes. These brightly colored plastic slides are worn all over the country. She sells at least 20 – 30 pairs per month; but during the holidays or when school terms begin she sells many more. With her profit she has purchased chickens and a goat and greatly improved the number and quality of meals for her children. 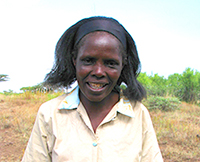 Naome Kanenu is married with seven children and lives in a drought-prone area. She used her loan to buy water to irrigate her small garden of tomato and onion plants. With regular watering, the plants matured in record time and she started a “pick your own” produce business so that she would not have to provide the labor for harvesting. By rotating when the seedlings are planted, she ensures that some produce is always ripe and ready for picking. She transports the water to her garden by jerry cans, filling them up at a watering station a half-mile down the road. Her business is so profitable that within the first six months, she was able to pay all the boarding school fees for her three children still in school (about $900), install a small home solar lighting system and even purchase a used television. Naome is saving regularly out of her profit to buy a water storage tank and pipes so that she can connect her home directly to the local water station.

Robyn Nietert and a group of Washington DC area businesswomen founded WMI in 2007. The organization provides comprehensive village-level microfinance and training to women in rural East Africa with a sustainable program that the women run themselves. WMI is not a big bank or large corporation, but a group of businesswomen on one side of the globe helping their counterparts on the other. An important advantage of a microfinance initiative is that, unlike conventional aid programs, microfinance preserves the capital base of an organization by providing loans rather than subsidies.

WMI works with women on a village-level scale in remote rural areas of East Africa (Uganda, Kenya and Tanzania) that have primarily agricultural-based economies. Buyobo is an administrative sub-county in east Uganda near the Kenyan border on the slopes of Mount Elgon. Inhabitants support themselves by mixed farming, growing crops like bananas, maize, beans, and cassava. They also raise cattle, goats, chickens, and turkeys, along with a smaller number of sheep. In addition to basic subsistence farming, they grow coffee as a cash crop and engage in commercial activities connected with the nearby town of Mbale.