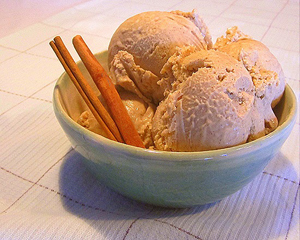 
In a saucepan over medium heat, heat the half‐and‐half, cream, vanilla, cinnamon stick and ground
cinnamon, whisking occasionally to make sure the mixture doesn’t burn or stick to the bottom of the
pan. When the cream mixture reaches a fast simmer (do not let it boil), turn off the heat and let the
flavors infuse for 10 minutes.
Whisk together the egg yolks and the sugar. In a thin stream, whisk half of the cream mixture into the
egg yolk mixture. Then pour the egg‐cream mixture back into the saucepan containing the rest of the
cream mixture. Heat over medium heat, stirring constantly with a wooden spoon. At 160 degrees, the
mixture will give off a puff of steam. When the mixture reaches 180 degrees it will be thickened and
creamy, like eggnog. If you don’t have a thermometer, test it by dipping a wooden spoon into the
mixture. Run your finger down the back of the spoon. If the stripe remains clear, the mixture is ready; if
the edges blur, the mixture is not quite thick enough yet. When it is ready, quickly remove it from the
heat.
Meanwhile, in a bowl, put two handfuls of ice cubes in the bottom, and add cold water to cover. Rest a
smaller bowl in the ice water. Pour the cream mixture through a fine sieve or chinois (to remove the
vanilla bean pieces and cinnamon sticks) and into the smaller bowl. Chill 3 hours, then continue
according to the directions of your ice cream maker.