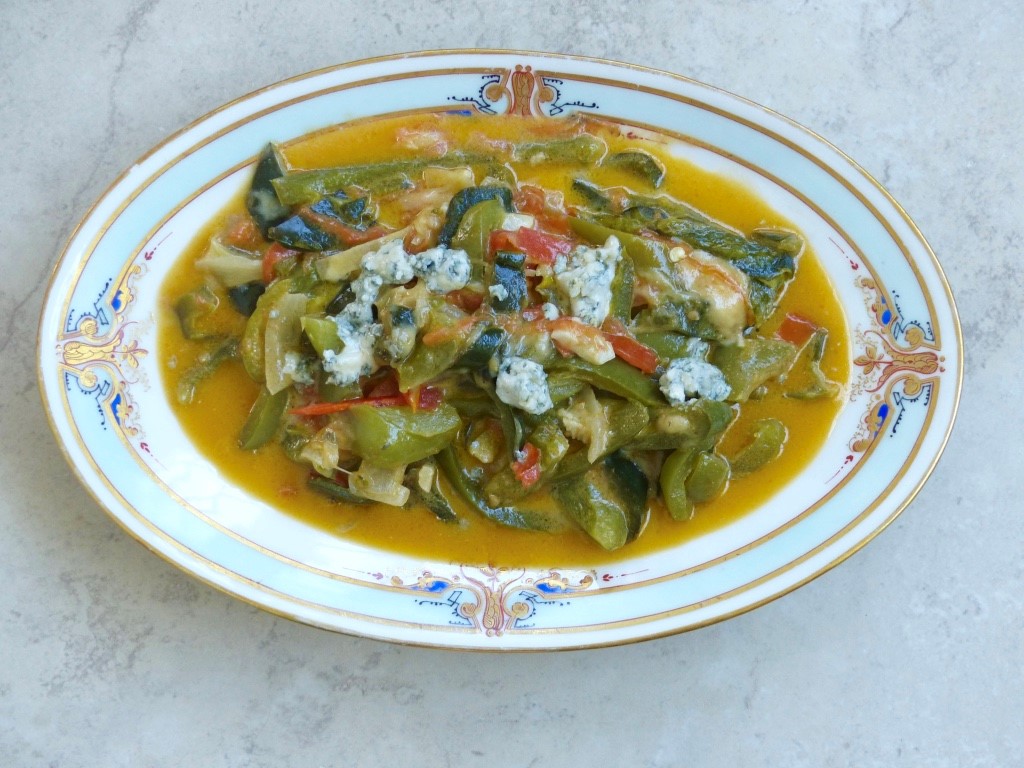 
This apparently is known widely as the “national dish of Bhutan.” “Ema” means chiles, and “Datshi” means cheese. The dish consists of simmered chiles, with melted cheese. Hmmm, kind of a take on our nachos, I think. Yum.

In terms of what kind of cheese to use, the possibilities are up to you. I’ve looked at many videos of how to make Ema Datshi, and invariably they use what looks to me like processed American cheese, and typically two to three different kinds of cheese seem to make their way into the pot. I think the most important factor is that you want to use a cheese that melts well and is mild tasting. I used jack cheese, but fontina or brie might be good. You can use cheddar, but don’t use a sharp cheddar as they become rather oily when melted, and definitely don’t use mozzarella, as that tends to be very stringy when it melts.

There is a Bhutanese cheese knows an “churu,” and it is similar in profile to our blue cheese or gorgonzola cheese. It is often found in Ema Datshi, so I included a bit of that as well for a flavor boost.  And don’t be afraid of the chile component! You can remove some of the seeds from the chiles for a milder dish. I used a large jalapeno and a large serrano chile, and I removed half the seeds. The resulting dish was pleasantly spicy, but nothing to be afraid of.

It seems that Ema Datshi is eaten as is, straight off the plate. Nowhere did I see any recommendations on how to eat it or what to serve with it. And if you did that you would really enjoy it that way. But to stretch the dish, (which I almost consider a dip), you could top steamed Bhutanese red rice with it, or serve on top of buckwheat noodles, which are also used in another recipe that I’ve posted this month.

I also recommend taking a look at this very short video (it’s just over two minutes), to get a good idea of how everything should look. I did vary my cooking instructions from what is seen on the video because I found that cooking cheese in the pot for 15 minutes resulted in a lot of cheese sticking to the bottom of the pot. Sad!

1 to 2 oz. gorgonzola or other blue cheese


Slice up all the vegetables into strips. Remove some of the seeds from the chiles for less heat if desired.

Add the vegetables to a saucepan, along with about one-quarter cup of water. Bring to a simmer, and cover and cook over low heat for about 10 minutes, or until the vegetables are cooked.

Add the butter and the cheese cubes by placing on top of the vegetables. Cover the pot and simmer for just a couple more minutes, until the cheese is melted. Remove the lid and stir until combined, pour out onto a platter. Garnish with a few more blue cheese crumbles.

This is delicious eaten right off the platter. Or you can spoon it over Bhutanese red rice, or buckwheat noodles.