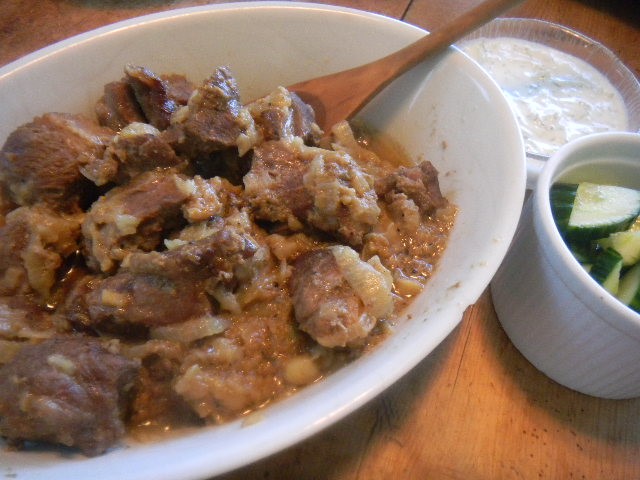 
In our Western culture, we automatically assume that anything referred to as a “kebab” comes on a stick! But in Afghanistan it seems, kebabs can be virtually anything: meat or chicken, skewered or not, barbecued or oven baked or pan fried, cut into chunks, ground, or eaten as a chop. Perhaps we can assume that any type of meat that is cut into chunks qualifies as a kebab?

Whatever unorthodox form it takes, this delicious combination of lamb, onions and cinnamon is meant to be devoured and scooped up with slabs of fresh steaming naan. This dish is incredibly easy to make – marinate, then bake. Take note that it marinates overnight, but marinating in the morning to bake in the evening works well, too. I purchased a piece of lamb shoulder and cut my meat into chunks. Lamb shoulder has nice marbling and makes for a very tender cut. You could use lamb stew meat as well, which is a combination of different cuts of lamb.

I will be making this dish again and again, it ranks as one of the best lamb dishes I’ve ever had. And DON’T forget the cinnamon. Sprinkle liberally with plain ground cinnamon once you’ve put the lamb into the serving dish. Serve with a platter of crunchy cucumbers, a green salad, or see this recipe previously posted for tomato salad.


In a large bowl mix together the yogurt, oil, garlic, coriander, pepper and salt and stir well. Add the lamb and onions and coat evenly with the yogurt mixture. Cover and marinate overnight.

Preheat oven to 400 degrees. Pull the lamb out a half hour before you a ready to cook. Put the lamb into large pot or Dutch oven and cover with a lid. Put it into the oven and cook until the lamb is very tender (about 1¼ to 1½ hours). Remove the lid, give it a stir, and continue to cook another 20 to 30 minutes until some of the liquid has reduced and you have a thick, oniony sauce.

Turn the meat onto a platter and sprinkle with ground cinnamon. Serve with warm naan bread and plain yogurt. You can season the yogurt with a little salt and stir in some grated cucumbers or chopped mint if you like.