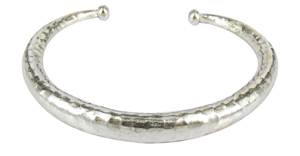 Thai Karen Silver is between 99.5 percent and 99.9 percent pure silver. Karen silver has higher silver content then Sterling Silver thus making the material easy to bend and shape into forms. The hand-hammered and chiseled details are unique trademark of the Karen Hill Tribe and show that each piece has been formed by the hands of skilled Karen craftsmen. Every piece of Karen silver jewelry is captivatingly beautiful and uniquely handmade.

This handmade creation is offered in partnership with NOVICA, in association with National Geographic. 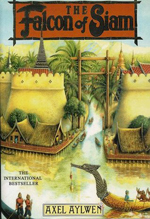 The Falcon of Siam
By Axel Aylwen
Arrow Books Ltd. 1989

This historical novel transports the reader to the mystery and beauty of the ancient Kingdom of Siam (modern-day Thailand). Against the backdrop of the fight to control the Asian trade routes of three centuries ago, The Falcon of Siam chronicles the journey of a young Green stowaway to his destiny in 17th-century Thailand. A master storyteller, Author Axel Aylwen weaves real history, geography and culture into this epic anthology of Thailand.

“A thoroughly enjoyable adventure story. It is also the most successful fictional treatment of Thailand by a foreigner yet.” – Bangkok Post 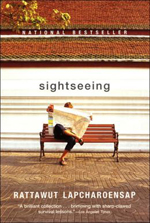 Set in contemporary Thailand, these stories are tales of family bonds, young romance, generational conflicts and cultural shifting. Born in Chicago and raised in Bangkok, author Lapcharoensap introduces American readers to lives where activities like cockfighting are seemingly as typical as learning to ride a motorcycle. Each story presents a nation far removed from its exotic stereotypes. In the opening story “Farangs,” the son of a beachside motel owner commits the cardinal sin of falling for a pretty American tourist. In the novella, “Cockfighter,” a young girl witnesses her proud father’s valiant but foolhardy battle against a local delinquent whose family has a vicious stranglehold on the villagers. Though the stories describe a culture that will be foreign to most readers, they contain themes that touch on the human spirit.

“This debut collection by 25-year-old Thai American Lapcharoensap is a welcome addition to the continually expanding and diversified realm of Asian American literature.” – Library Journal 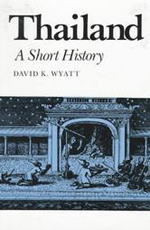 This recognized history of Thailand starts with a prehistory, covering the aboriginal Tai peoples who lived in what is today Thailand, Myanmar, Laos, Cambodia, Vietnam, and even southern China. Author David Wyatt explains how the early Tai created states, such as Siam and Sukotai, which formed a civilization based on Theravada Buddhism. Then, in the Ayutthaya civilization, Wyatt details how Siam had to deal with the Burmese invaders from Burma and the Mongols, which climaxed in 1767, when Burma finally conquered Siam. Next, readers learn how Thailand avoided colonization from the British, French, Dutch, etc. Finally, the modern period is covered, with the move of the capital to Bangkok in 1782. The book closes with how Siam became Thailand, following the removal of the absolute monarchy.

“Wyatt knows his subject well enough and has enough enthusiasm for it to make his book . . . entertaining as well as eminently educational.” – David McElveen, Asiaweek 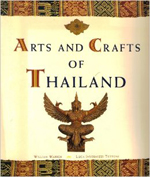 Arts and Crafts of Thailand
By William Warren
Chronicle Books, 1996

Thailand has a long-standing tradition of arts and crafts. Unlike most of its neighbors, it has never been occupied by a foreign power or engaged in wars of conquest, and it has thus enjoyed a relatively peaceful development since ancient times. Patronized by the court and the temples, the designs and craftsmanship of Thai artisans have flourished. Thai textiles, probably the best-known example of its indigenous handicrafts, form part of the assortment of creative traditions and products presented in this book. Baskets floor mats, water dippers, shimmering silk fabrics, as well as fine silverware, lacquer-ware, jewelry, furniture and wood carvings are featured: objects from the most basic traditions of village life to the aristocratic tradition: from ceremonial life to the traditions of theatre arts.

“Thai textiles are beyond compare, and the discussion in this book is detailed, illustrated with vintage photos of costumes and sumptuous color plates of the textiles. Equally captivating are sections describing woodcarvings, theater masks and costumes, basketry, and floral creations. Although temple arts are not included, a section on contemporary Thai crafts presents a very interesting overview of Thailand’s artistic achievements.” = – Library Journal 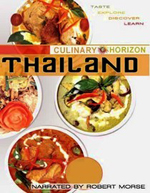 Explore the culture and cuisine of Thailand in this film that combines a journey through the country’s colorful landscape with cooking classes from Thai chef Sompon Nabian, who teaches you how to prepare dishes such as Pad Thai. From the bustle of Bangkok to the serenity of a Buddhist temple, the locales help set the tone for Nabian’s hands-on instructions for crafting other dishes, including spring rolls and spicy prawn salad.

”A very interesting look at Thailand. Having never been, I was very interested to learn about the cuisine and culture of this country. I really enjoyed the scenes with the elephants (who doesn’t love watching elephants paint and play soccer?).” – Netflix 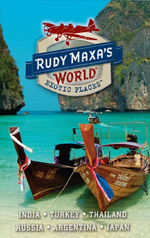 Travel show host Rudy Maxa offers this guide to Thailand (Disc 3 in this 6-disc set), including destinations in the streets of Bangkok, the jungle of the Golden Triangle, and the Andaman Coast. Maxa explains how to get the most out of your trip, from buying food in street markets and visiting ancient shrines, to exploring remote villages and paddling through pristine coastal waters.

Other countries in the set – India, Turkey, Russia, Argentina, Japan

“Don’t even think about hitting the road unless you’ve consulted with Rudy Maxa, one of the country’s premier travel gurus” – Paul Theroux, Bestselling Travel Writer 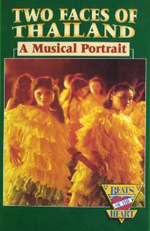 Beats of the Heart: Two Faces of Thailand: A Musical Portrait 60 minutes, 1995

From the king’s personal jazz band to the key role of traditional Thai music in the emerging sport of kickboxing, Thailand’s changing musical traditions are the subject of this fascinating journey into a culture transitioning to the modern era. Also explored are music in Thai street theater, the role of traveling dancers, and the development of genre-crossing musical forms that blend folk tunes with Western pop sounds.

“Not unlike “Riverdance” in its scope, this video shows the cross-country tour of a band of musicians and dancers.” – Rottentomatoes.com 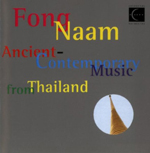 Fong Naam – Ancient-Contemporary Music from Thailand
In the late ’60s, a young American by the name of Bruce Gaston arrived in Thailand: his ambition, to avoid the draft. During his stay, Gaston became captivated by the music of Thailand, studied its techniques, and decided not to return to the United States. Together with Boonyong Kethong he formed an instrumental ensemble known as Fong Naam, which is now one of the best known pi-pha ensembles in the nation. Although the music Fong Naam plays is rooted in classical tradition, it is also porous and absorbs outside influences. 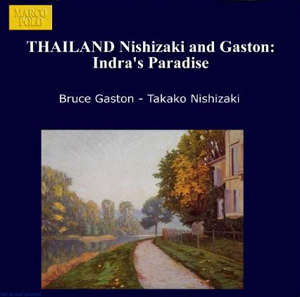 “We study traditional Thai music to learn from the rich Thai heritage and what it can teach us about ourselves at present. Thai music is challenging – detailed and delicate, always mingled with the freedom of individual expression. Nothing is set down in notes, written on page, but is handed down orally, to be heard and then played according to the musical experience of each musician.” – Bruce Gaston

Recommended by Smiles on Wings – “Pimon Singhasin is a musician and painter from Northern Thailand. Mr. Singhasin’s music was featured in Smiles on Wings’ Dining for Women video.” Listen to samples of the CD

“We began our music careers by making three ‘Songs for Life’ albums which explored the darker side of being poor, so both the lyrics and the melodies were sad and discontented. In fact we now realize we were writing songs just for our own kind of people, and that the music trapped us where we were. Now we understand that we have to change ourselves first, we have to be what we want to be, and rise above our problems to express the free and undying spirit in us all. So we have started to work just with instrumental music, and all our new albums have a sound that is more like painting–a fresh world, radiant and full of love.” – Pimon Singhasin

Music and artwork by Singhasin can be found at PuPaint.com

Available only through Amazon.UK – or directly from Thailand through the artist’s website.

More on Smiles on Wings