We Are Afghan Women: Voices of Hope is the title of the book released just last month from the George W. Bush Institute. I had an opportunity to attend an event announcing the book’s publication in Washington, DC, hosted by the United States Institute of Peace which featured a discussion by Laura Bush, former U.S. First Lady, and Mina Sherzoy, a Council member of the U.S.-Afghan Women’s Council.

Politics aside, the event and the facts highlight the tremendous impact that women themselves, as well as funders who support women’s education and self-sufficiency, have on communities and cultures. 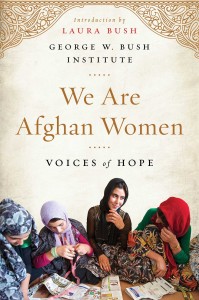 The book tells the stories of 28 Afghan women. There is Sakena Yacoobi, Ph.D., who ran underground schools for girls during the Taliban rule, and now has centers across Afghanistan teaching women and girls basic literacy. (The literacy rate is around 37% for Afghan women.) Masooma Jafari launched a national midwives association to help educate women and make births safer. Naheed Farid is the youngest female member of Afghanistan’s Parliament (there are 28 female members in all); during her campaign, opponents cut her face out of the campaign posters but her husband and father-in-law stood by her all the way through her election.

It was particularly interesting to hear Mina Sherzoy’s comments and her perspectives on needs:

“Teach our women something so they can earn money. When women have income, there’s both a decline in domestic violence and they get decision-making rights in their families. Women with jobs who can provide money and food for their children is a way to make lives better for entire communities.” – Mina Sherzoy, U.S.-Afghan Women’s Council.

Some takeaways from the event:

For me, my key takeaway – beyond inspiration – was that, yes, as DFW members we are making a significant difference and improving women’s lives, and creating sustainable change for generations to come.