Burma (Myanmar) is a country with a troubled and turbulent history. With a woman as its leader and symbol of peaceful resistance, the opposition party is seeking to change that. 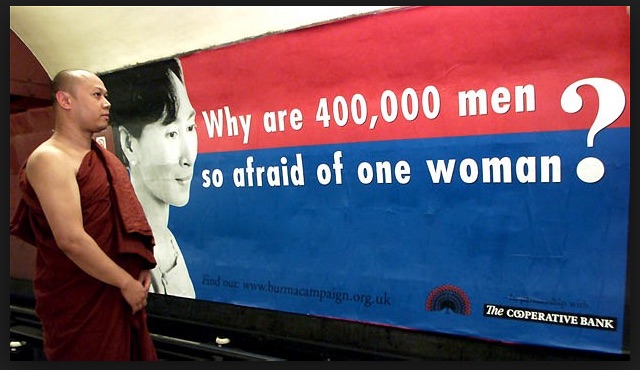 Aung San Suu Kyi is the national heroine of Burma (Myanmar). She is a strong, powerful woman – an international symbol of peaceful resistance.

This afternoon our group was welcomed at the head office of the National League for Democracy, the opposition political party of which she is the chairperson. To put some context around her life story – and to understand how swiftly things have changed in this country in the last several years — I’ve drafted this abridged version of a complicated history:

In the late 1940s, Burma gained independence from Britain. General Aung San, Aung San Suu Kyi’s father, was destined to be its first leader under independence, but he was assassinated when she was just 2 years old.

For the first 10 years, the country had a functional democracy. In the late19 50s, there were “colorful rebellions.”  The elected government asked for military assistance.

Similar rebellions took place in the early 1960s and the military again was called in. A temporary “caretaker” government eventually became permanent and increasingly became a repressive regime. Political opposition was banned

Burma was isolated from the world and became one of its poorest countries.

In 1988, student protests and peaceful prayer gatherings by Buddhist monks sparked nationwide rebellions, which were always repressed by the military. Aung San Suu Kyi emerged as the popular leader.

In 1990, the government announced free elections, but the principal opposition leaders were arrested and not allowed to campaign. Despite that, the opposition won 59 percent of the vote and 81 percent of the seats in Parliament. The military government was not happy with this result and nullified the elections. Dissidents and activists were sent to forced labor camps. Aung San Suu Kyi was put under house arrest for nearly two decades.

In 1991, she was awarded the Nobel Peace Prize. The committee chairman called her “an outstanding example of the power of the powerless.”

After another uprising in 2008, dubbed “The Saffron Revolution” because it was led by monks, the government agreed to a Constitutional Referendum and made significant political reforms.

In 2012, Aung San Suu Kyi and a handful of opposition candidates were elected to Parliament, holding 45 of 664 seats. New nationwide elections are to be held this year. 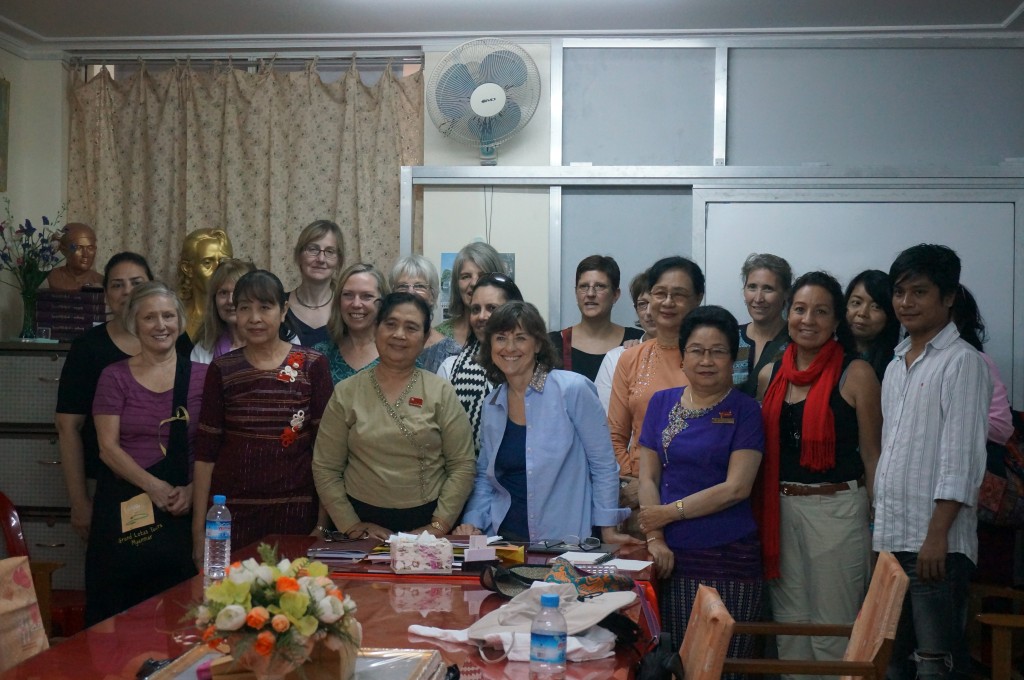 Today we met with U Nyan Win, central executive committee secretary and learned about the actions the democracy party is taking. She talked of the party’s active Women’s Committee focusing on education, health care, ethnic communications and constitutional reform. She told us about mobile clinics that visit remote areas to distribute medicine and perform routine health checks. They sponsor 250 free schools using volunteer teachers. They are challenging and mentoring women to participate in politics.

Efforts continue in Burma (Myanmar) to reform the constitution which severely limits participation by women and the opposition party. Some examples are:

When asked if they are afraid of potential repercussions or backlash from the current regime, U Nyan Win said, “Yes, we are afraid, but if we don’t do something, nothing will change.”