Travelers meet a struggling mom and a gifted child and find a way to connect and to help.

The second single mom our small group visited in the rural outskirts of Danang was Tran Thi Be. Be inherited a horrible skin disease from her mother – neuro blastoma – which is quite disfiguring, especially to the face, and apparently incurable.

Because she believed no man could love her, when she fell in love with a man who promised to take care of her and her mother forever, she agreed to move into his mother’s home with him without being married. But, when she became pregnant, this man fled, leaving her as a domestic slave for his abusive mother. He had failed to mention that he was already married, and she has never received a penny from him to support the child.

She fled home to her own mother, who was very poor and now unable to work because of her illness. Be took a very hard job in the forests high up on the mountain, walking to and from work every day, in order to support her son and her mother. Eventually, she was able to get a better job in a brick factory closer to home.

Our Empowering Foundation for Women and Their Children grant has really improved her life. She built a piggery, and the pregnant pig we gave her had 5 piglets which she raised and sold. The money she earned allowed her to build her son his own room with bricks she had made, including a desk for studying, as well as a used motorbike for herself to get back and forth to work more quickly and easily. The pig is pregnant again. Her son also received a new bike to help him get to school. 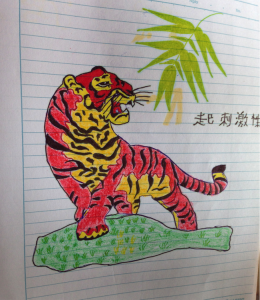 Her son, Son, is now 15 years old. During our visit, Son stood in the corner of the room as Be told us her story. He had the full demeanor of shame – head hanging, eyes diverted, slouching, invisible. He was asked by the director of Children of Vietnam (COV) to show us a notebook of his drawings which we passed around. We were amazed. This kid can REALLY draw. In this country, he could grow up to be an illustrator, graphic designer or video game artist.


He confessed to us that he was thinking of dropping out of school and going to work to help support the household. He’d had some stomach problems recently and fallen so far behind in two of his classes that he was afraid he wouldn’t be able to pass the entrance exam for high school in 3 months.

Virginia Martin, 23, from the Thousand Oaks (CA) chapter, inquired why he couldn’t get tutoring. Be can not afford it. She asked what it would cost ($15 per class per month – so about $90). Virginia said: “That’s easy. Done!”. She and I agreed that we’d pay it ourselves. Our COV translator explained to him how important it was for him to stay in school, at least through high school. She had tears in her eyes at the end of their exchange (the COV people are WONderful!).

I asked her to ask him: “If we were to provide you the tutoring, do you have the courage to fight to stay in school?” After this was translated, Son lifted his head in surprise and started smiling from ear to ear. He promised he would work very hard and do his very best to succeed.

After we had observed the piggery and Son’s new room, our group departed Be’s home. There was an immediate disagreement within our group. Two members felt strongly that we had no business interfering and that we didn’t understand the consequences of what we had offered. What we had done was “inappropriate”. I agreed to discuss it with the COV staff when we returned to their offices next morning.

I met with Nancy Letteri, executive director of Children of Vietnam, and Huang, the translator and the employee in charge of the EFWC program. They were all surprised at Son’s problems in school – he had been doing fine at their last check 60 days earlier. They explained that our grant money could not be used for a boy, but if we wanted to set up a separate sponsorship for him, “that would be lovely”.

I went about speaking with other members of our group and quickly collected $100 in cash which I turned over to the COV staff. They promised to allocate it to Be every month, to select the tutors, and to monitor Son’s progress. They also promised to send us an email to report on the results of his entry exam.

But it didn’t end there. That afternoon, each group gathered in the district we had visited for a lunch with all the single moms in that district. Be was there, looking as serious and sad as the day before. The women had been cooking all morning, and this was no ordinary meal. The tables groaned with the load of food. We were joined by district bureaucrats, as well as the Women’s Union representative who had accompanied us on our visits. 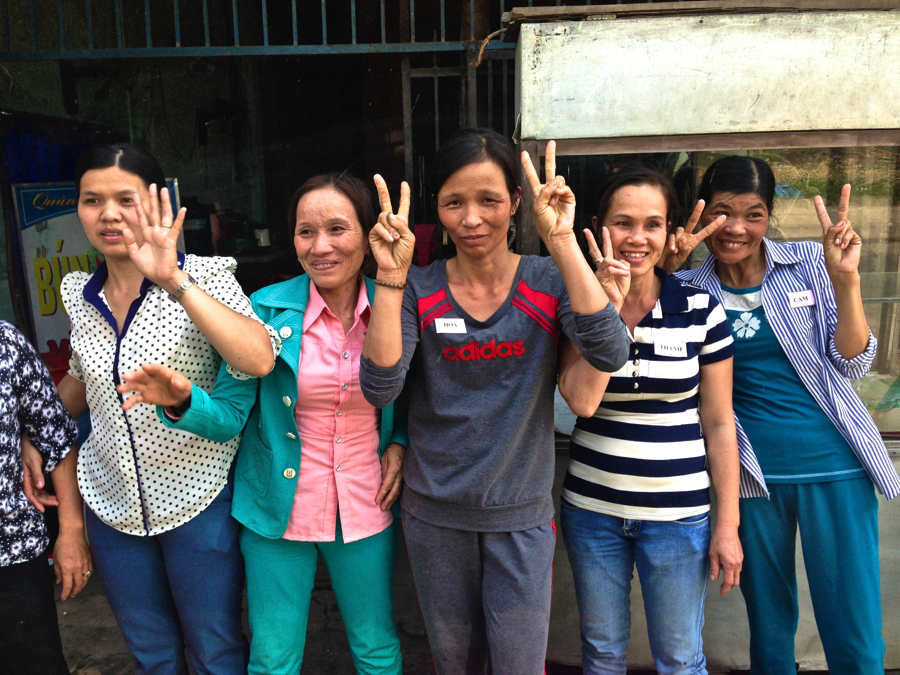 Be is second from left in the turquoise suit

After a fabulous feast, there were many speeches back and forth. Thora Pabst, a leader from Greeley, CO and I expressed much gratitude at how the women had opened their hearts and their homes to us. We talked about how DFW is organized and why we do what we do. One of the women spoke on behalf of the others to thank us for having changed their lives. We expressed the same sentiment.

Then Huang asked me to do a presentation of our sponsorship for Be’s son. I was surprised and a little unsure of how this might be received by the other single moms. I decided to talk about what a good boy Son was and how impressed we had been with his art and didn’t like to see him struggle in school. As I handed her the first month’s installment, Be started smiling for the first time since we had met her the day before, and the other women applauded roundly.

After many photos were taken, we finally boarded our bus to depart. All the single moms came out to the sidewalk, linking arms and waving us good-bye. But the most beautiful smile of all was on Be’s face!