Connections, For leaders, For members, Programs, Storytelling, Together Women Rise

Foundation Rwanda was our featured program in September 2013. This summer, chapter leader Reiko Johnson had an opportunity to visit Rwanda and meet  some of the women during a peer support group session.

I recently returned home from a visit to Butare, Rwanda. My friend, Beata Umugwangwali, president of Friends of Butare, invited me to join her to participate in a library project for a school in her home town. Butare Catholique is a pre-K to 12th grade public school with 1450 students. With the funds we raised we built the structure of the library and in the future will fill in with shelves, desks, and books.

During my visit, I had the opportunity to participate in Foundation Rwanda‘s peer support group for women who were raped during the genocide in 1994 and had children as a result. Foundation Rwanda was the featured program in September  2013 for Dining for Women, and received a grant with funds raised by individual chapters holding educational dinner meetings.

During the 100 day war in Rwanda in April-July of 1994 close to one million Tutsi ethnic minorities were brutally killed by the Hutus. Nearly 800,000 women and girls were raped during this genocide and about 20,000 children were born as a result. Most of the rapists were killers of the women’s families. 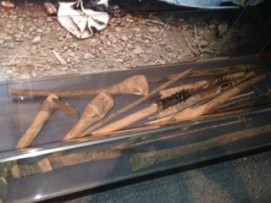 Weapons used in the genocide on display at the museum

It was hard to visit the genocide memorial museum and to learn about the war.  The museum also described the other major genocides from the last century – Nazi Germany, Cambodia, and Bosnia; it brought to light the precarious nature of our civil society. Seeing a peaceful, safe Rwanda 20 years post-war was encouraging and made me hopeful.

The peer support groups of Foundation Rwanda bring together these women twice a month for six months. During these meetings an incredible transformation occurs. Eleven women were present at the support group and one woman shared that she had been disgusted with her child and only felt hostility towards her daughter — a product of her rapist and a killer. She was also depressed and never wanted to go out. After this group began and she started sharing her stories, connecting with other women, and hearing about others women’s traumatic experiences, things began to change. She started to have a new relationship with her daughter. She did not feel alone or withdrawn.

Another woman took the leap of faith to share the circumstance of her son’s conception with him. Since then he understands why she has been distant and comforts her at times of need. All of the women are deeply grateful for this group which has facilitated this healing, peer support, and deep trusting relationships. Recently, the organization also started to support the children’s education financially which has become integral to the continued success of the program. Many had tears of memories and joy when they generously shared their stories. 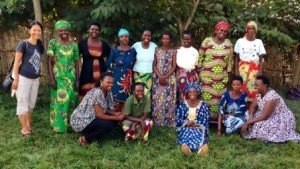 Reiko Johnson, left, and some of the women in the Foundation Rwanda peer group

Needless to say I was moved and in awe of the women’s strength, resilience, and willingness to change their lives for the better after their unfathomable trauma. DFW carefully chooses programs that focus on local involvement and sustainability. I envisioned the program’s lasting positive change in the lives of the women and children served. Witnessing this grass-roots organization in action consolidated my conviction to continue my work with DFW. I am grateful to be part of this movement to empower girls and women worldwide.

You can contact Reiko by email if you have any questions.