The Mariposa DR Foundation takes its name from the Mirabal sisters, revolutionaries knows as “Las Mariposas” (The Butterflies) whose tragic end but courageous fight is a source of enormous pride in the country. 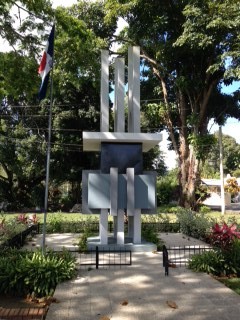 A monument to the Mirabal sisters in their hometown of Salcedo

Their legacy is evident throughout the Dominican Republic, when you see butterflies painted on the sides of buildings, at the monument in Puerta Plata where the three sisters were murdered, and on the 200 peso bill that displays their faces.  “Las Mariposas” — which means the butterflies in Spanish, but everyone in the Dominican knows them as the Mirabal sisters.


Today, we walked in the footsteps of the famous Mirabal sisters who are the pride of the Dominican people and who ultimately led to the United Nations commemorating the anniversary of their deaths as the International Day for the Elimination of Violence Against Women.  Most importantly to our group, the Mirabal sisters provided the inspiration and the name for the girls’ empowerment center that Dining for Women awarded a grant, and the reason why our group is here in the Dominican.  While this is a service trip and we have come to work with the girls at the Mariposa DR Foundation, it is also important to learn about the culture and history of the country we are visiting.

In preparation for our trip, we were encouraged to read “In the Time of the Butterflies” by Julia Alvarez.  The book tells the tragic story of the Mirabal sisters, who opposed the dictatorship of Rafael Leonidas Trujillo (leader of the Dominican Republic from 1930-1961). The sisters were committed to the revolutionary overthrow of Trujillo’s repressive regime and were jailed and ultimately assassinated on November 25, 1960 for their involvement in this movement.  They became martyrs and mythical figures in their country where they are known for their underground code names – Las Mariposas. It was Julia Avarez’ book that truly brought attention to the story of the Mirabal sisters and ensured their place in history textbooks as well as the Dominican people’s hearts. 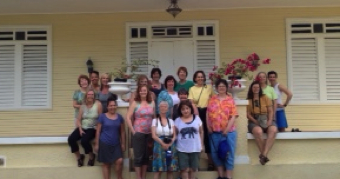 The group photographed in front of the Mirabal family home

We set out early for our full-day “Chasing the Butterflies” tour up the mountain to, the hometown of the Mirabal sisters. Everyone was warned ahead of time about the steep, curvy mountain road and those of us prone to motion sickness came prepared. While the road lived up to its reputation, it also provided the most spectacular views of the Dominican countryside. Our stop for breakfast at El Molino restaurant gave  us the chance to capture the views of the Cibao valley with our cameras and also to learn more about the history of the Mariposa DR Foundation from its Founder and Executive Director, Patricia Suriel.

After breakfast, we set out again for our main destination of the day – the Mirabal Museum, which is located at what was once the home of the mother of the Mirabal sisters. It is also the final resting place of Patria, Maria Theresa, Minerva and Minerva’s husband Manolo Tavares, who was also one of the country’s most famous revolutionaries. The museum provides glimpses into the sisters’ lives, including displays of their favorite dresses, sculptures they made while in jail, paintings they did and family photos.  We were told that prior to her death last February, Dede, the only surviving sister, often sat on the porch of the house and shared family stories.  In addition to raising her sisters’ children, Dede was committed to keeping the story of her sisters and their sacrifice alive.

Our group made a second stop at the original Mirabal family home, along with the nearby monument to the sisters.  Then, it was back down the mountain … this time at a much faster pace!

Our very full day ended with a group dinner at Pomodoro restaurant on Kite Beach.  Although the restaurant is just down the road from our hotel, we were advised, for safety reasons, to walk down the beach instead of the road due to the numerous, speeding motorbikes and other traffic.  (We are constantly being cautioned about  how dangerous the roads are to pedestrians. Who knew the Dominican has the highest rate of pedestrian accidents of any country!)

At dinner, we learned that our Dining for Women grant is the largest single grant received by the Mariposa DR Foundation … a fact that made us feel both proud and excited about seeing our funds in action at the center in the coming days.