Eighteen TWR members recently spent a week getting to know the students and staff at the Mariposa DR Foundation. The program brought us all closer to the work this program does to empower girls who are living up to the legacy of their namesakes.

There are an awful lot of negative things going on in the world.  Stories reporting the good are much more rare, and as often as not are mostly found as shared clips on Facebook. But when our focus shifts to scan for the good, there is much to be told. And one place where that good is happening is in the Dominican Republic, at the Mariposa Center for Girls (supported April 2014). Eighteen Together Women Rise members just returned from a trip to visit them on-site, and spent a week volunteering there, learning about Dominican history and culture as well.

The Mariposa Center was named in honor of the Mirabal sisters, who were murdered in 1960 by the dictator Trujillo for taking part in the resistance movement trying to overthrow his regime. The three sisters were known by their code name of “Las Mariposas” — The Butterflies —and have since their deaths become heroines in their country, symbols of courage and conviction, their portraits even appearing on the 200 peso bill.

With these women as role models, the Mariposa Center provides a place for girls ages 8-18 to dream bigger dreams for themselves and receive the support to achieve those dreams. Working exclusively with girls living in extreme poverty in Cabarete, the town on the north coast that they’re located in, they host after-school classes to assist with reading, math, and English. They also provide opportunities to learn sports, swimming, and as the girls get older, job skills. Scholarships are given and uniforms and books provided, as well as buses to get the girls safely to and from the center, as the Dominican Republic has one of the highest rate of traffic fatalities in the world. 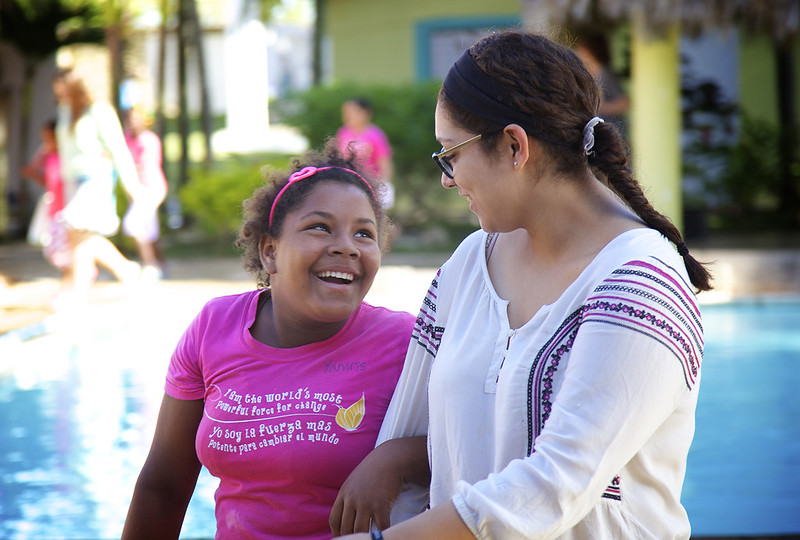 Our travelers got the chance to see for themselves the huge helping hand that this program gives, as we joined the girls in their math games and reading classes, using Spanish/English books to help them read in their own language as well as practice pronouncing ours. We also sewed curtains, helped cook food, turned over compost, scrubbed and painted, taught origami, and schelpped over many suitcases full of donations for their nearly-completed teaching kitchen.

Although most non-Spanish speaking travelers wished they’d been able to communicate more with the girls, they also remarked on how much they WERE able to share even with the language barrier.

But it was the Mariposa staff — mostly 20-somethings, four of them American — who were able to fill in the back story and help us understand the dire specter of generational poverty, early motherhood and hopelessness that would confront these girls without Mariposa’s intervention. Although currently working with just 150 girls, this program is creating a change that will have a ripple effect within the girls’ own families, the families they eventually have, and the daughters that they will themselves mother.

With a setting right on the edge of the Atlantic Ocean, this was a tropical vacation but with a much deeper meaning. Our travelers reflected on our last evening together about what this experience had meant for them, how touched they had been by meeting the girls and getting behind the normal tourist curtain. They especially remarked on exchanges we had with the mothers of the girls as they told us of the importance of the program to not only their daughters, but how it had also rippled out to affect their whole families.

Much fun was had by all, as well as much help given, compassion expressed and understanding enhanced on both sides. As Tricia Suriel, Executive Director of Mariposa said to us before we left, our travelers shall all now be Mariposas forever. I believe we travelers all feel that too, as this much-needed program and its brave, smart and lucky girls have found a place in each of our hearts.