“Today, one in eight people do not get enough food to be healthy and lead an active life, making hunger and malnutrition the number one risk to health worldwide—greater than AIDS, malaria and tuberculosis combined.”
— World Food Programme

By Donna Shaver and Marcie Christensen

When we think of malnutrition, we may have images of rail-thin adults and stick-figure children with distended bellies, victims of famine and conflict.  But according to the World Food Programme, these people represent only 8 percent of the world’s hunger victims.  There are 870 million malnourished people in the world — all ages, rural and urban.  Children, women, and people in rural areas are the most affected.  And malnutrition is not just near starvation; it is much more complicated.  While it is true that one form of malnutrition is lack of sufficient food to sustain life, there are other forms.  The World Food Programme separates what is generally referred to as malnutrition into several categories:

The World Food Programme also notes that there are several types of malnutrition, the most basic of which is called protein energy malnutrition.  This is the type with which we are probably most familiar.  The victim has major deficits in all major macronutrients such as carbohydrates, fats, and proteins.

The health of the child starts with conception, and is inextricably intertwined with the health of the mother. In 2013, the British medical journal, The Lancet, published a series of papers titled Maternal and Child Nutrition. Key findings include:

“They are of all ages, from babies whose mothers cannot produce enough milk to the elderly with no relatives to care for them. .. Above all, children, women and rural communities are on the front lines of hunger.” 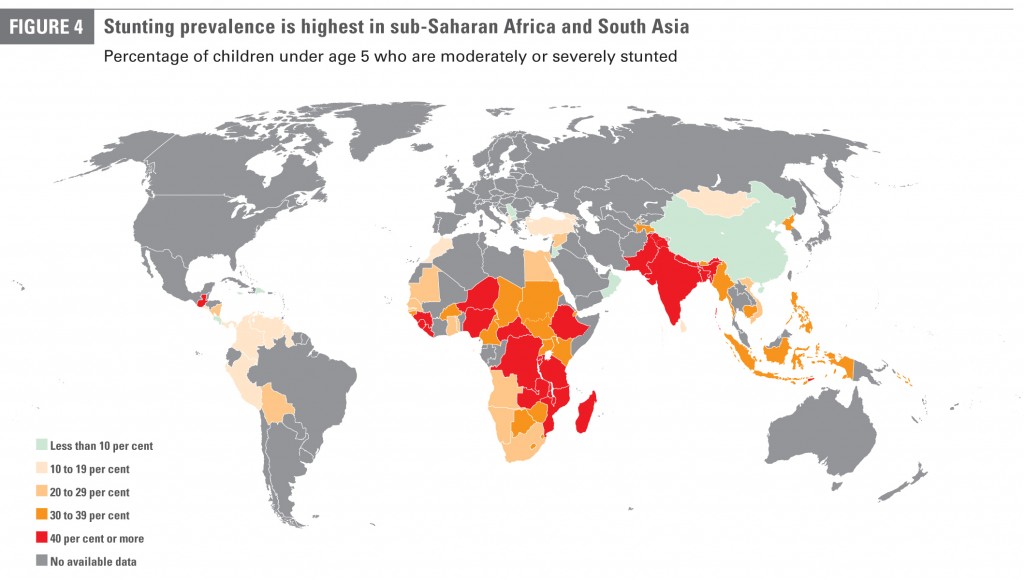 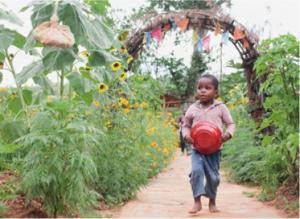 Stunting, characterized by small body size and lower IQ, is the result of poor nutrition in early life.  Stunting occurs because of inadequate nutrition in the first 1,000 days of life – and the clock starts at conception – reducing a child’s ability to survive, to learn, and to earn.  According to UNICEF’s 2013 report, Improving Child Nutrition: The achievable imperative for global progress, stunting affects 165 million children under the age of five.  Globally, stunting affects about one in four children under age 5, and an estimated 80 percent of them live in just 14 countries.   A mother needs adequate nutrition throughout pregnancy and breastfeeding to prevent stunting in her child.  And a stunted woman is more likely to give birth to a stunted child, perpetuating the cycle.  Stunting isn’t just an issue for families and communities.  As stated in the report, “This in turn affects the development potential of nations.” Referring to Africa, World Bank President Jim Yong Kin stated “Every child stunted is GDP growth that is left on the table”.Stunting has always been considered to be a condition affecting the poor.  But that assumption is being questioned in India, where “stunting afflicts 65 million Indian children under the age of 5, including a third of children from the country’s richest families”.  An Indian child is more likely to be malnourished than a child in the planet’s poorest countries.

Poor maternal health contributes to the problem. Increasingly, attention is focused on sanitation.  Dean Spears, an economist at the Delhi School of Economics, believes that the answer lies in open defecation.  Excrement gets into groundwater, on the soil, on crops in the field, and in rivers that supply drinking water.   As UNICEF notes, one gram of feces can contain 10,000,000 viruses, 1,000,000 bacteria, 1,000 parasite cysts, and 100 parasite eggs.

India’s sanitation is among the worst in the world, which explains why wealthy children as well as poor children experience stunting.  Children of all economic classes are repeatedly sickened by exposure to unsanitary conditions.  As Jean Humphrey, professor of human nutrition at Johns Hopkins Bloomberg School of Public Health, explains, “These children’s bodies divert energy and nutrients away from growth and brain development to prioritize infection-fighting survival.”

A large obstacle to improved sanitation is the challenge of convincing the millions who practice open defecation to adopt the use of toilets. In a sample of 3,200 rural households that have been supplied with a government latrine in India’s five poorest states, the majority refused to use it.  Many people believe that using the latrines is unsanitary.  “The problem is that germs are invisible, and so understanding the threat of open defecation is far removed from reality until they are sick and dying.  And even then, they don’t really understand”, says Archana Patkar, program manager at the Water Supply & Sanitation Collaborative Council in Geneva

From Rwanda – Dining for Women’s Featured Program for November 2014 is Gardens for Health International. Gardens for Health works in partnership with government-run health centers to integrate agricultural support with health and nutrition education into the treatment of malnutrition. The organization has have worked with over 1,900 families, helping to ensure that 7,600 children have the healthy food they need to grow and thrive.

Their work is having a measurable impact on the families they serve: one year after enrolling in the program, 71% of children are at a healthy weight.

From India – In 2013, UNICEF launched an attention-getting campaign to improve sanitation, since studies made evident the link between open defecation and malnutrition. Aimed at young people, the theme is “Take Poo to the Loo”.  The website features cartoon videos, facts about the health threat of open defecation, catchy songs, health and hygiene information, and more.  The language is bold and descriptive.  There is also a “Take Poo to the Loo” Facebook page.

From Tanzania – Vitamin A supplementation among children aged six months to five years was introduced in 2001 and more than 90 percent of children have received twice-yearly supplements. This coverage has been cited as one of the key factors in the country’s declining rate of child mortality – from 126 deaths per 1,000 live births in 2000 to 68 deaths per 1,000 in 2011.

Strategies to Prevent Stunting and Malnutrition

Many countries are taking action to alleviate malnutrition and reduce stunting, from direct actions during the 1,000 days covering pregnancy and the child’s first two years, to nutrition-sensitive approaches to sanitation and land-use practices.  You can read many success stories in the 2013 UNICEF report, Improving Child Nutrition (a 127 page report available in PDF). 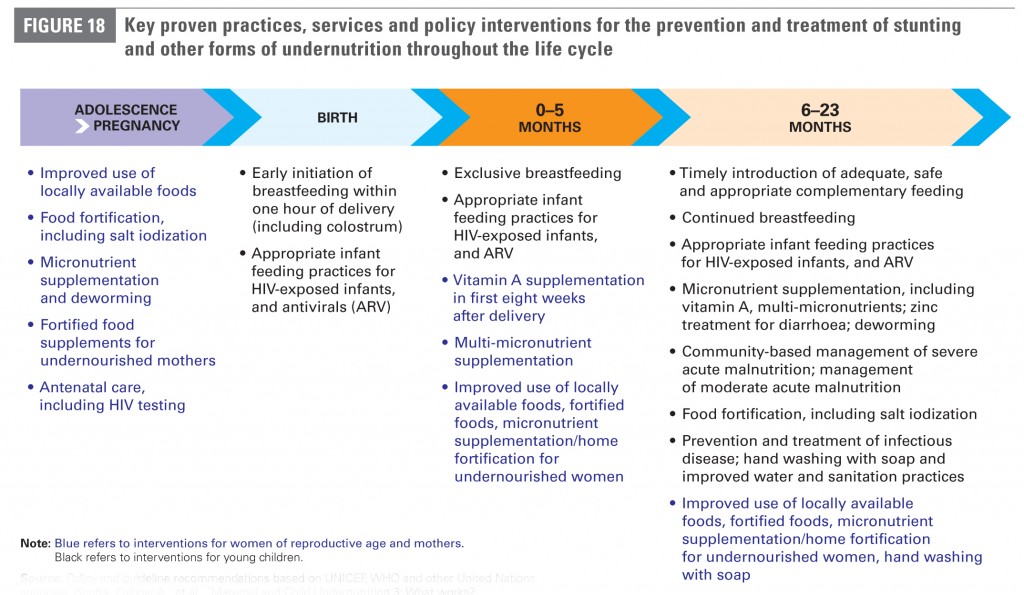 There are also new developments in global partnerships that address malnutrition, including

More on Gardens for Health International