It was fitting to start our first full day in Guatemala going back in time to the Iximche /ee-sheem-chay/ ruins between Antigua and Panajachel. Iximche was the capital of the Kaqkichel Mayan Kingdom from 1470-1524 prior to Spanish conquest. Over 100 structures have been found at Iximche which is composed of four large plazas strung out along a ridge and protected by a deep moat.  Buildings include palaces, numerous pyramid temples and residences, and a couple of ball courts. 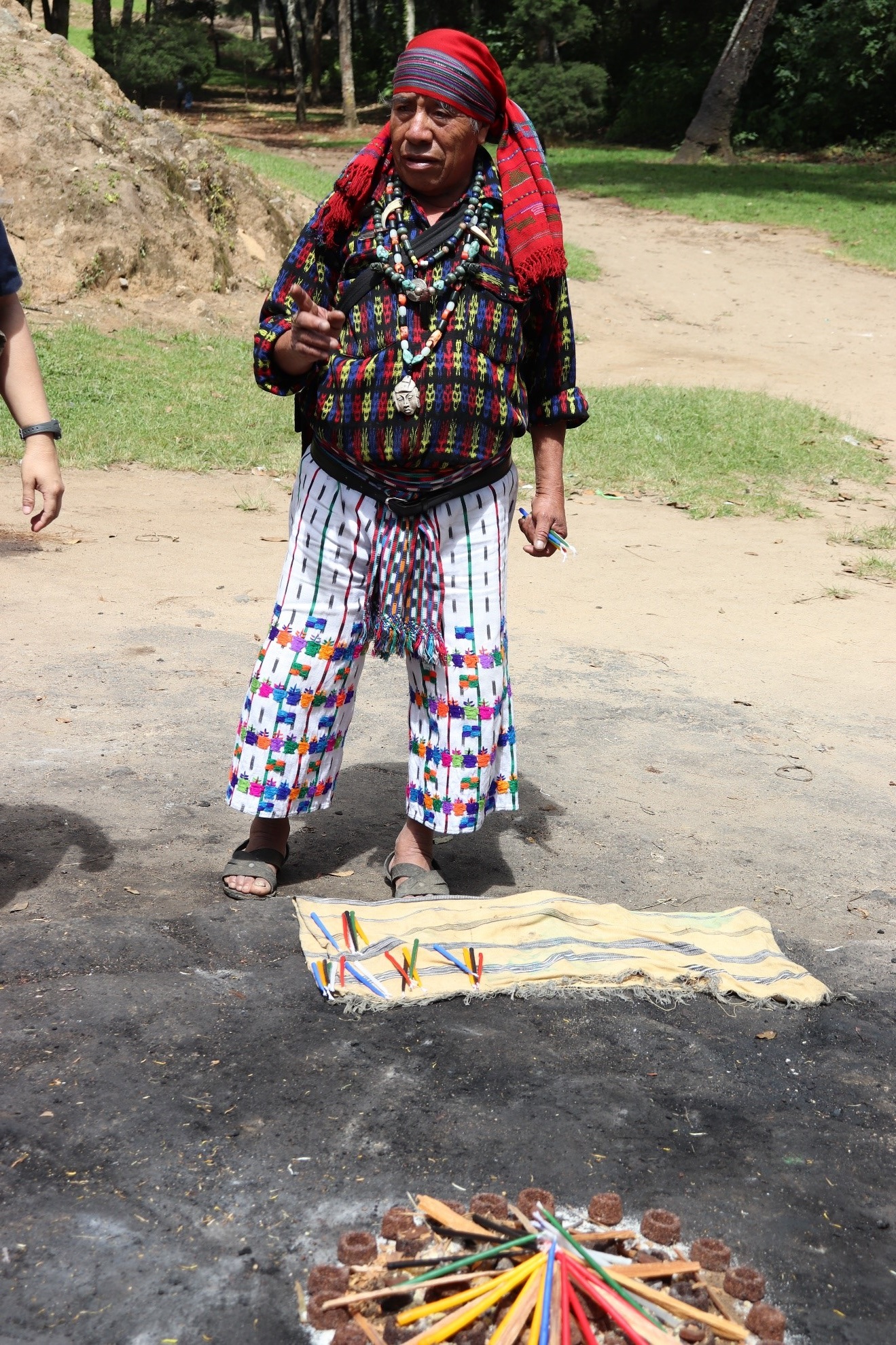 It was clear from the start that our guide, Karen Ayala, is a former archaeologist and could not contain her excitement about the history and the present of this special place.

After a tour of the onsite museum and a walkthrough of Mayan history and religion, we headed to the furthest part of the park for our opening ceremony with a Mayan priest.

In Guatemala, the Mayan religion is very much alive and often combined with Catholicism. The ceremony in which we participated was in a well-used place of altars. In fact, right next to us was a family celebrating San Simon on a Mayan altar. For our ceremony, the priest gave all members of our group candles, and he created a beautiful altar with incense and candles in a formation representing the four directions.

After the priest had summoned the four directions, we were each asked to kiss our candles, and the priest touched the candles to heads and hearts before placing them on the altar.

After the candle ceremony, the priest prepared the second stage of blessings which entailed herbs soaked with almond water that were then smacked on our arms, backs, and tops of our heads.  I say “smacked” only because it was a stronger wallop than one might expect. But we all smelled heavenly afterwards, and we felt a strong sense of welcome to Guatemala.

Karen, our guide, then began our historical tour of the ruins with a gathering under a giant shade tree in the middle of the ruins before exploring the extraordinary Mayan history and belief systems. 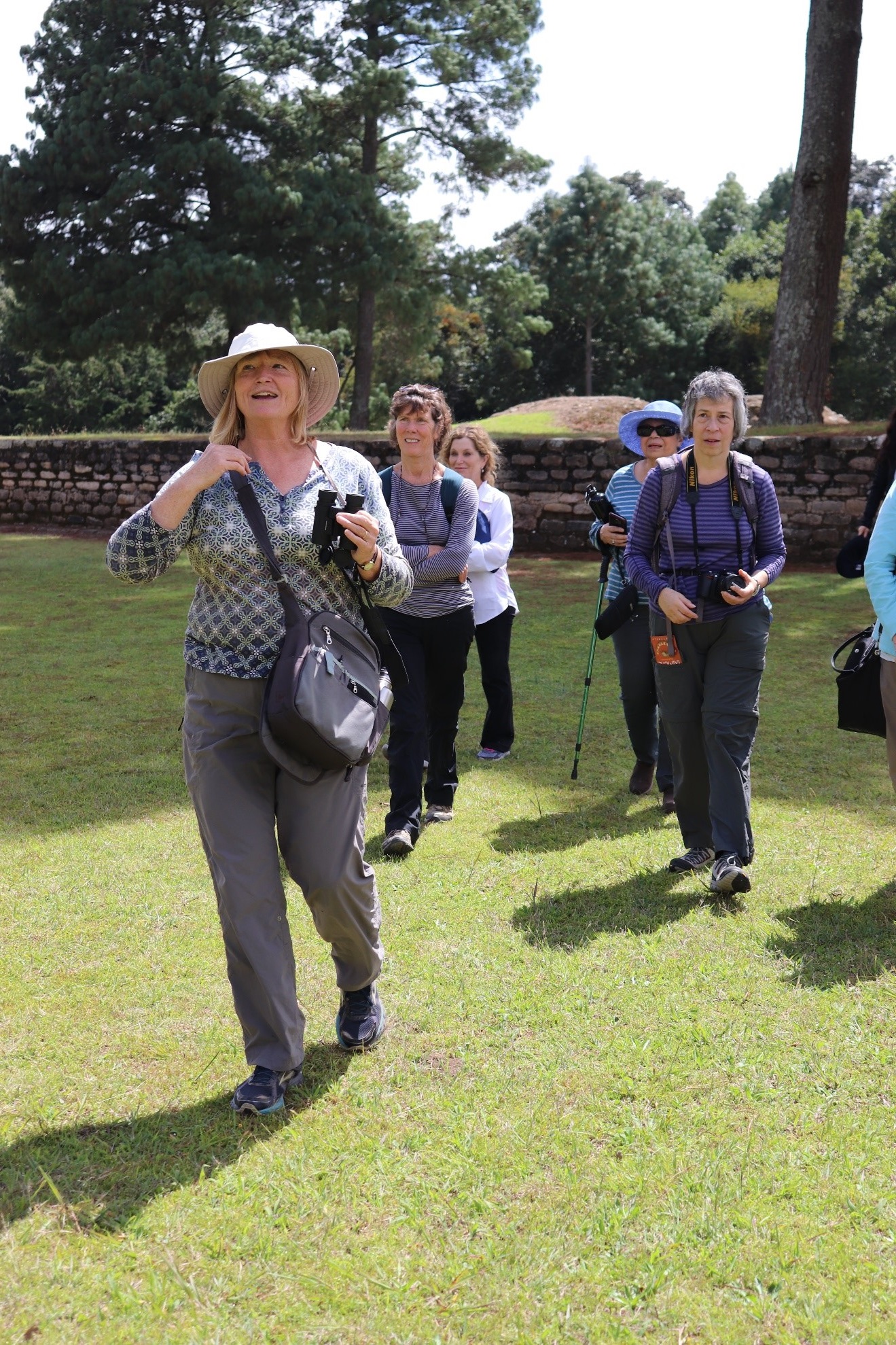 Then, an unexpected thing happened, that even surprised our guide. Lynn Kellogg, a dedicated member and DFW Mentor from Oregon, is also an avid bird watcher. I saw her with her binoculars all day. About halfway through the tour, she said, “There are Acorn Woodpeckers here!” She was pointing out that they were flying to a tree directly ahead of us. She walked quickly over to the tree and pointed out how the woodpeckers will bury the acorns in the bark of a pine tree to retrieve later. 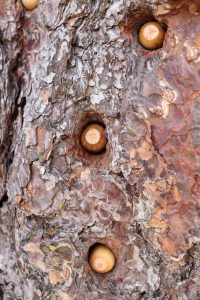 It was great fun, and yet another time that I found myself reveling in the extraordinary company of DFW members.

We ended the day by having a traditional Guatemalan lunch nearby and then driving to Panajachel on Lago de Atitlan where we would stay for the next four nights. On the bus ride, Karen continued to share with us more recent history of Guatemala including the impact of the civil war which ended in 1996. Her candor and the groups’ questions made the bus ride an incredibly fulfilling two hours.

Of course, we were thrilled with the handicraft markets upon arriving in Panajachel. It was a bustling evening of colors and friendliness – all that Guatemala is known for.