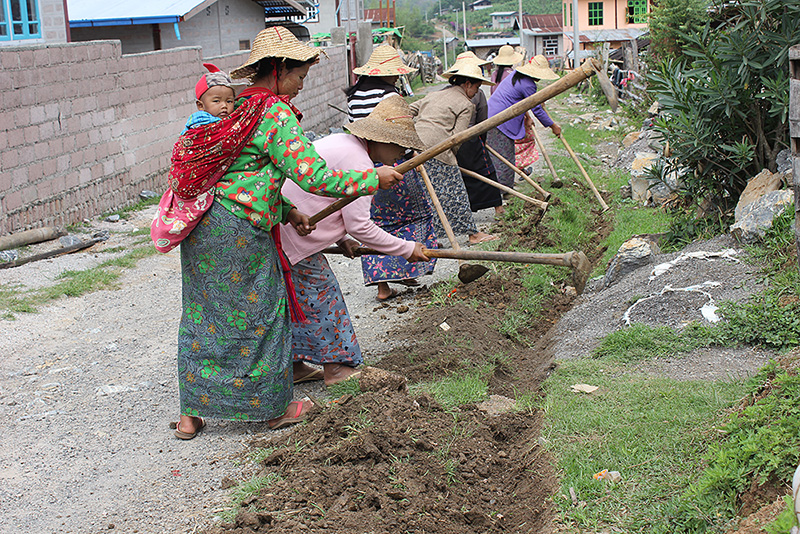 This project will improve the maternal health practices of all reproductive age women in 12 Pa-O ethnic tribal villages, with regard to family planning, prenatal and postnatal care, nutrition, safe delivery, breastfeeding, and infant care.

In the rural Pa-O tribal villages, maternal and infant mortality is high and children younger than age 5 do not receive adequate nutrition, resulting in stunted growth and compromised brain function.

Young Pa-O women are typically married and pregnant by age 17, with an average of four babies by age 24. Prenatal care is rare and home delivery is risky with unskilled attendants and no access to a hospital. Villagers have little money so they avoid going to the hospital until all else fails.  The hospitals are more than two hours away by car, and the car needs to be hired from the nearest main road, often an hour away. Becoming a mother exposes these women to a 1 in 12 chance of dying, and for their children, a 1 in 7 chance of dying before age five, generally from preventable causes. The women are poor, do not finish primary school – they have an average of 4 years of schooling, have little access to contraception, little reproductive health knowledge and have few recognized choices in their life. The cycle continues with each generation.

Nutrition for mothers is poor, with a diet of mostly white rice and vegetables. They are expected to work in the fields until delivery and they receive no prenatal examinations. Family income is generally lowest among those families with the most children. Children throughout Myanmar who are younger than age 5 have a 35 percent rate of moderate or severe stunted growth. The rate is much higher in the rural villages where Muditar works but there are no accurate measures. Fewer than 50 percent of children younger than age 5 receive immunizations because mothers do not understand the value and it’s a far walk to access them. 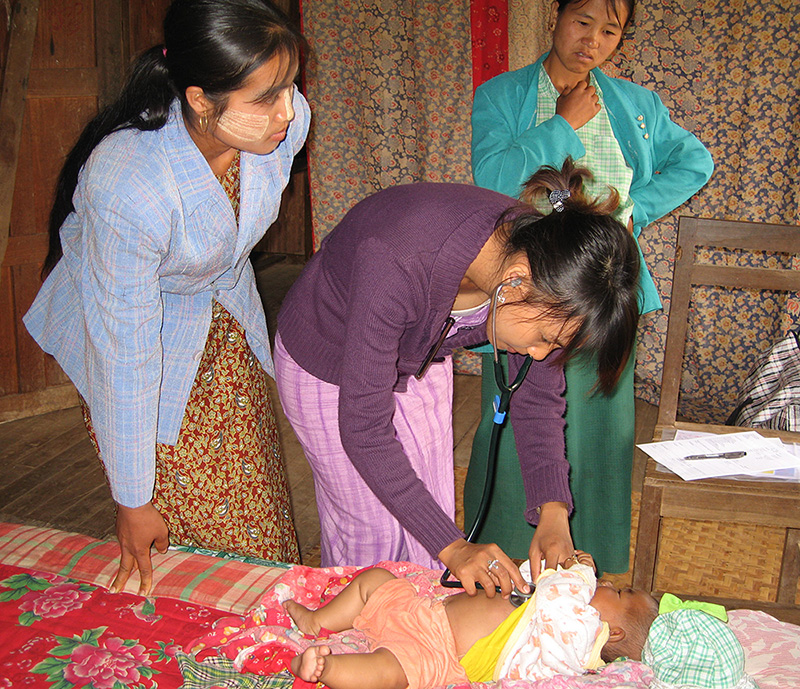 Muditar will train and supervise 60 women (five per village) as Village Health Educators to facilitate a series of three safe motherhood workshops for 1,277 women to increase their knowledge and practice of healthy reproductive behavior. Curriculum topics will include family planning, prenatal and postnatal care and safe delivery options, along with better infant care such as good nutrition, breastfeeding, immunizations and monthly growth monitoring.

Muditar expects that these 1,277 in its 12 current partnership villages will be knowledgeable and empowered to make healthy reproductive choices thereby reducing maternal and infant mortality and raising healthy children. Village women will have local resources for continued support with reproductive issues. The Village Health Educators and an auxiliary midwife (trained through a related Muditar program) will provide consultation, affordable access to contraceptives, prenatal care, skilled delivery support and infant care.

Village women will have a forum to discuss very personal issues such as contraception use, family planning, empowerment, finances and future hopes.

Of the $36,107 grant for one year, some $12,000 will be for wages for Muditar’s director, Dr. Khaing Zar Oo, a training assistant, 60 Village Health Educators and the auxiliary midwives. Another $7,000 will be for participant compensation for lost wages while in class. The bulk of the remaining money will be in subsidizing birth control ($7,500) and for prenatal and children’s vitamins and infant monitoring equipment. The remainder will be for training materials, transportation and meals during training. 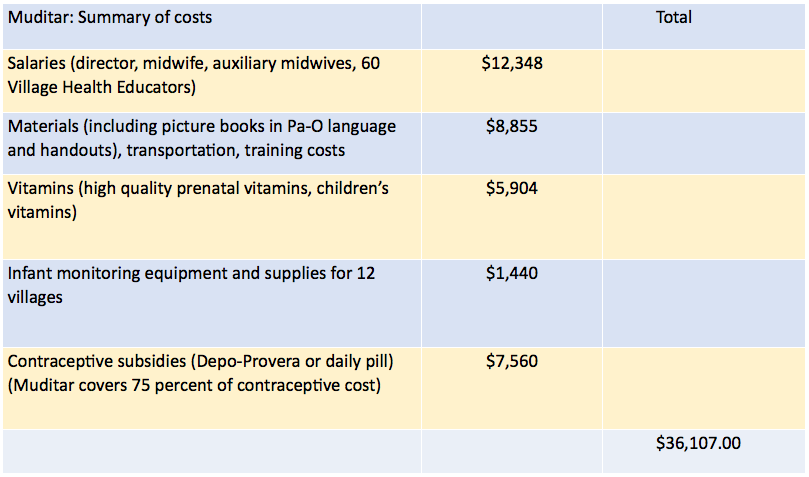 Why We Love This Project
We love the focus on a marginalized group with high needs. Muditar has had significant success working with various marginalized communities in Myanmar, and the organization’s health interventions and knowledge are contributing to a lower maternal mortality rate and a better outcome for children.

I gave birth to all four of my babies on the kitchen floor because it was the warmest place in the house. Now I would like a pill or shot (contraception) so I don’t have any more babies.

I never knew there was an examination I could get before delivering my babies that would make it safer. I have four babies now and I wish I had taken the (prenatal) vitamins that others are now taking.

When I was young, my sister died in childbirth, and then her baby died a few days later. I was very sad and scared that could happen to me, so I never got married. I am happy that now mothers in our village will have help delivering babies. 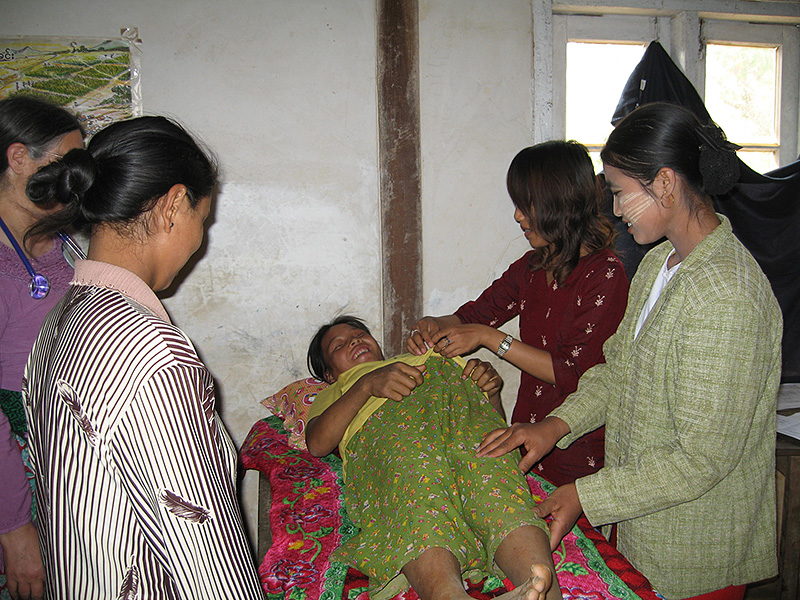 ditar Foundation was established in 2006 by Zaw Tint Hlaing along with Mike and Tricia Karpfen, founders of Shanta Foundation, to provide support for struggling Pa-O tribal villages. In its first six years, Muditar created an integrated community development program in collaboration with five villages, addressing their needs for education, health, infrastructure, income generation and leadership. Dr. Khaing Zar Oo joined Muditar as medical director in 2009 and was promoted to Muditar director in 2010. The Muditar program “graduated” the original five villages and currently works with 12 additional villages in Taunggyi and Pin Laung Townships.

Muditar’s partnership villages are chosen from villages with minority ethnic tribes that are not served by any other aid organizations and whose average annual family income is below $500. A typical village is far from the nearest health clinic, lacks funds to pay for health care, has no trained midwives and limited access to contraception, few students in middle/high school, no electricity, has water sources that are contaminated and far away from homes, and few opportunities to increase income. In particular, the Pa-O people are marginalized, uneducated, and live in remote communities far from the cities.

Myanmar (formerly Burma) is in Southeastern Asia, bordering the Andaman Sea and the Bay of Bengal, between Bangladesh and Thailand. It was part of Britain’s Indian Empire and administered as a province of India until 1937 when it became a separate, self-governing colony. In 1948, Burma attained independence from the British Commonwealth. From 1962 – 1988, the country had a military ruler and self-appointed president. The military seized power in 1988. Since 1989, the government has promoted the name Myanmar. The United States has not formally recognized the name. The people of Myanmar accept the name and prefer it to the previous name, Burma.

Multiparty legislative elections in 1990 resulted in the main opposition party winning a landslide victory, but the junta placed the opposition leader and Nobel Peace Prize recipient Aung San Suu Kyi under house arrest. In 2008, Myanmar was struck by Cyclone Nargis, which left over 138,000 dead and tens of thousands injured and homeless.

Since 2010, the government has initiated a series of political and economic reforms leading to a substantial opening of the long-isolated country. These reforms have included releasing hundreds of political prisoners, concluding negotiations on a draft nationwide ceasefire with the country’s various ethnic armed groups, pursuing legal reform, and gradually reducing restrictions on freedom of the press, association and civil society. Aung San Suu Kyi was elected to parliament in April 2012, and now serves as chair of the Committee for Rule of Law and Tranquility.

More than 32 percent of the population lives below the poverty line and more than 22 percent of children younger than age 5 are underweight.