Door buster or door rusher? All women stand on the shoulders of those who broke down barriers before. In March, let’s remember, honor, celebrate and emulate them.

International Women’s Day is upon us and it has me thinking about women who make sacrifices, who want more, and who are up for the long fight.  At Dining for Women, some of us are that one woman — the one who pushes the door open first. Others are the women who flood in behind her, tearing down the doors, walls and barriers to equality.

We understand that there is no “other.” When one woman stands up, she stands for us all.  We are connected through shared experiences as women — the very core of Dining for Women.

I have been trying to learn about organizations we have funded in the past and my reading brought me to Kakenya Ntaiya, founder of Kakenya’s Dream and the Kakenya Center of Excellence, a featured program in 2014. She was just a young Maasai girl when she made a great sacrifice, trading her submission to female genital mutilation for her education. Ntaiya continued her education, eventually attending college and obtaining her Ph.D.  In addition, her greatest achievements are the more than 200 girls in her organization who have enjoyed a 4-8th grade education and have permanently avoided female genital mutilation. Securing Ntaiya’s status as a catalyst for change, the chief of her village in Kenya who had publicly declared in 2006 that “girls are for marriage, so there is no need to educate them” is now a member of the board and a supporter of the Kakenya Center for Excellence.  The door this brave woman unlocked is now pushed wide open for us all to create this change.

So often we think stories like Ntaiya’s are the province of developing countries, that gender equality is settled business in the US. 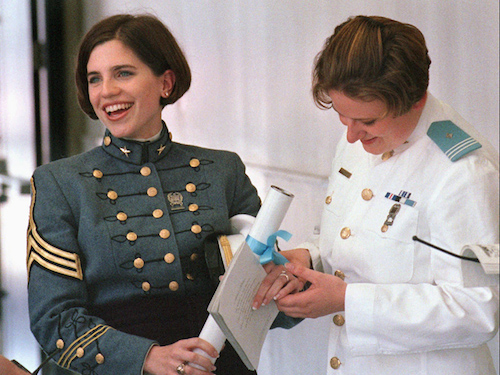 That’s very far from the truth. US women face inequality as well and we still need role models and powerful voices to help us break down the doors.


Women like Shannon Faulkner, a fighter in South Carolina who wanted to attend the Citadel. Twenty years ago The Citadel, a state-supported military college in Charleston, allowed only men in its Corps of Cadets.  After two years of legal battles, harassment, and relentless media attention, a federal judge ordered The Citadel to admit Faulkner in 1995. What most people remember about Faulkner is that she attended for one week before quitting citing physical harassment and exhaustion.  No one knew at the time that she and her family had received death threats.

If you remember this story, you remember the celebration that the young cadets had at the Citadel when ‘she couldn’t hack it.’ Faulkner never realized her dream fully, but since then, more than 300 women have graduated from The Citadel and even boast a higher graduation rate (71 percent) than the men (66 percent).

Shannon Faulkner fought for two years and attended one week.  What looked like a failure to many, opened a door to a tremendous opportunity for the women who would come after her. I’ve heard that Faulkner is a teacher in Greenville, SC, and I hope to meet her some day.

When young Emma Watson addressed the UN last year for the He for She campaign, I could hear her shaky voice asking all of us to stand up – men and women – for gender equality.  She referenced being the “Harry Potter girl”  in her speech and she courageously stood up for women of all ages.

And in just a few months, 218,520 men around the world have committed to take action against all forms of violence and discrimination faced by women and girls.

March is International Women’s Month and is the one time of year when the world is paying attention to the voices and actions of women who forced a door open.

In March, let’s take a moment to embrace those connections, to learn from the many stories of courageous women, and to take a chance to be brave ourselves — keeping a circle of empowerment moving the world forward.