Annie Johnston could never have predicted that getting involved with our Portland Southeast chapter of DFW would allow her to once again visit the home where all her childhood family gatherings took place.

And Karen Faunt, long-time chapter member who’s also on DFW’s Program Selection Committee – as well as being the home’s new owner — would never have guessed that by hosting a DFW potluck, she’d be able to provide a new friend with a cherished walk down memory lane.

END_OF_DOCUMENT_TOKEN_TO_BE_REPLACED 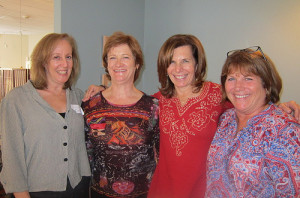 Operational retreats are a fairly common practice among big business and this fall two DFW regions employed the practice to bring leaders together to discuss a variety of topics.

Chapter leaders in the Mid-Atlantic and West had regional retreats in October.

Debbie Britt and Cindy Ariel, co-leaders in the Mid-Atlantic, brought in two facilitators – both are professional leadership coaches as well as DFW members – to run the program, which included a discussion of what is working at the chapter level and what could be improved, an idea-sharing discussion that “harvested” ideas from each member. END_OF_DOCUMENT_TOKEN_TO_BE_REPLACED