We get to explore a new cuisine this month, Peruvian food! My sister-in-law, Maria Chisholm, grew up in Lima, Peru, and she was only too happy to share with me her food memories and the things she still likes to cook. I’m really excited to share them with you. Here’s what she had to say.

Cebiche is practically the national dish, and couldn’t be easier to make. In fact, no recipe is really needed for this one. Marinate absolutely fresh fish in fresh lime juice – done!

I’ve also got a soup to share with you, called Aguadito de Pollo. Maria tells me it translates as “loose water.” There’s also a colloquial meaning to this comfort food dish as well. Fun fact: This is the kind of soup often referred to as “levanta muertos” (literally, that wakes up the dead), and is therefore quite often consumed after long and boozy nights or when having a bad flu.

The dish I’d like to share with you this month that I’ve put through my test kitchen is Causa Relleno. Stuffed mashed potatoes, anyone? Potatoes are an extremely important crop in Peru, particularly the yellow potato. When I came across this recipe I was really intrigued by the concept. Potatoes are mashed and flavored with lime juice and aji amarillo, flattened and layered with various fillings. It can be cut like a pie, rolled like a jelly roll, or rolled into bite size balls.

Native to the Andes, the aji amarillo (yellow chili pepper) is the most commonly used chili in Peruvian cuisine, and a very important and symbolic ingredient as well. The aji has had a passionate love story with Peru and its food since ancient times. Another fun fact: When the pre-Hispanic man wanted to offer a sacrifice to the gods, he fasted – avoiding sex, salt and aji for a few days.

Almost mild when seeded and ribbed before cooking, with a meaty and crunchy texture, the aji has a characteristic acidic and floral aroma, and a beautiful orange color. It can be eaten raw or cooked and has a medium to hot heat. You won’t find fresh aji amarillo chiles here, but you may be able to find them frozen or in a jar of paste. Latin markets would be a good source for this. You can also find it in a powder at Whole Foods.

Morena Escardo has a lovely blog that I discovered called Peruvian Delights, and I urge you to visit her site. She has some terrific recipes posted there, with lots of information and history behind the recipes. She has graciously given me permission to reproduce some of her recipes and photos. 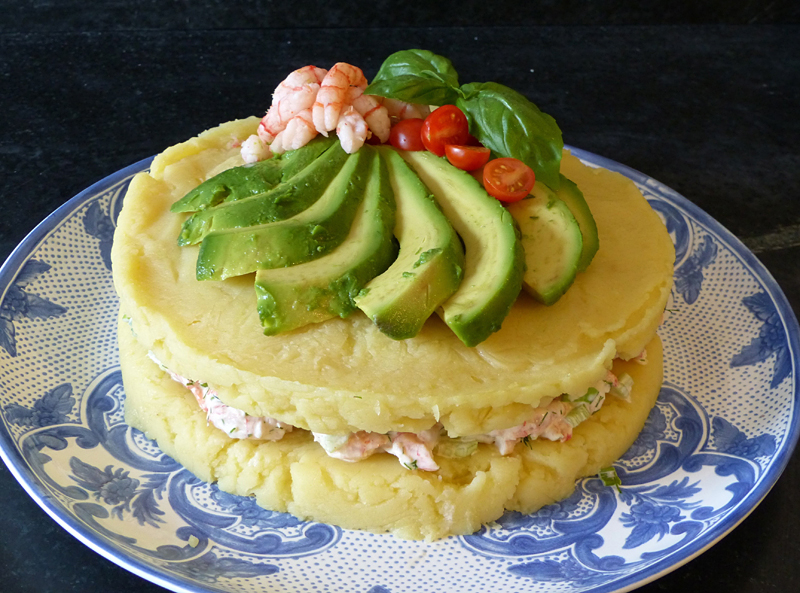 Causa is a popular dish cherished all over the country of Peru. It’s a fun and creative dish that is easy to make. Chicken salad and tuna salad are the usual suspects in the filling, but home cooks and restaurant cooks are branching out and using whatever suits their fancy. I used a shrimp filling in my version. You can serve it humbly at home or dress it up and bring it to a party with all the fancy toppings.

Causa can be formed many ways. You can do it jelly-roll style, or in a large round as I have done for this presentation. If you want to make individual rounds that would be an elegant way to present this. And for a more informal appetizer you could make individual bite-size ones. Just take a small ball of potato into the palm of your hand, press your thumb into the middle and push in a bit of filling and press closed. Garnish as desired.

For the fillings, choice of:

Boil the potatoes until pierced easily with a knife. When cool enough to handle, peel the skins and mash smoothly or put through a potato ricer.

Stir the chile powder into the lime juice so that there are no lumps and add to the potatoes along with the olive oil. Add salt to taste, you’ll probably need at least one teaspoon.

Line two 9” pans with plastic wrap and let the extra hang over the edge of the pans.

Divide the potato mixture between the two prepared pans and press to flatten and smooth out. Bring the edges of the plastic wrap over the potato cake and refrigerate until chilled.

Remove one potato cake from the pan by using the plastic wrap sling, flip and place on a serving platter. Spread with the filling of your choice. Top with the second potato cake.

Now comes the fun part. Decorate your causa rellena by using any of the suggested toppings from the list, or use your imagination and use whatever you have on hand. Serve chilled.