By Ellen Williams, DFW Traveler and Member of the WA, Spokane Valley-1 chapter

Guru Rinpoche, Precious Master,  rode upon a flaming tigress to mediate for four months in a cave now located on the lower floor of the monastery.  At this site, the iconic monastery is nicknamed Tiger’s Nest.  Guru Rinpoche established Buddhism– the everyday fiber that holds Bhutanese national identity.   He is said to have possessed supernatural powers to subdue demons and evil spirits.  His birth was foretold by Sakyamuni, the historical Buddha. This legend has turned the man into a powerful Buddha who can take many forms and possess many powers. 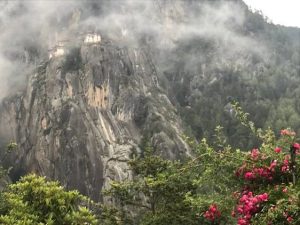 This hike was the culminating experience for our group.  Some of us had fretted about climbing the approximately two miles to the top.  I was one of those skeptics, merely setting my goal upon the halfway point, the Tea House.

On the morning of our walk it was foggy which gratefully kept the intense sun off our backs.  It also didn’t rain so it was not muddy. And we began our tour at seven in the morning avoiding the crowds.  Perfect conditions.

As the clouds ebbed and flowed our first glimpse of Tiger’s Nest was intimidating since the structure was clinging to a seemingly vertical column of stone. 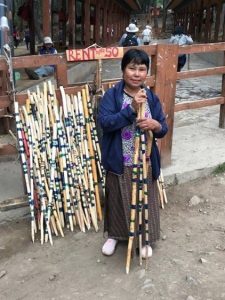 Fortunately a vendor at the entrance of the cave rented bamboo poles for 50 ngultrum or about 72 cents. Some stripes on my hiking stick had been recently painted as it transferred onto my hand. 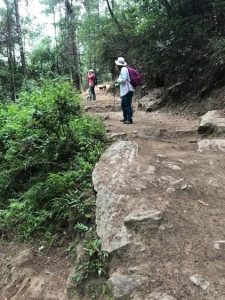 A sample of the trail.

Our guides spread themselves out to accompany the speedy rabbits, the middle interlopers, and the really slow plodders.  I was in the latter group.  Literally I placed one foot in front of the other.  It wasn’t the climbing that was challenging, although there were many rocks in the path.  It was the altitude at nearly 10,000 feet that proved challenging.   Frequent breaks and water helped.

From my personal view, the trail became steeper after the Tea House.  Then we hit the 920 irregular rock stairs, down and then up.  But by then the iconic monastery was within plain view so the goal was in sight. After nearly two hours we reached a 200 foot waterfall wrapped in prayer flags.

No cameras are allowed within the monastery, and shoes are always removed.  We visited several cozy sanctuaries filled with colorful banners and buddhas.  The usual butter candles, bowls of water, ornate littler Buddhas dressed in sumptuous brocades and the offering bowls were all present.  Walls were often elaborately painted with icons or stories of the Buddhas, particularly dedicated to Guru Riponche in his various manifestations.  What really distinguished this holy shrine for me was the intensive smell of burning incense which permeated the entire walls. 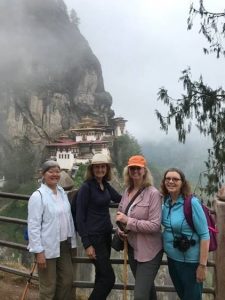 A fun feature was an indentation in a large stone.  If you can walk forward with your eyes closed and your finger finds the hole, your wish will be granted.  This is merely one of many superstitious beliefs.

The uppermost room we visited there sits a large Buddha of Rinpoche.  Legend has it that the workmen bringing it from Tibet could not finagle the steep climb with the heavy statute.  Buddha is said to have appeared and told the men that “Tomorrow I will appear.” And the statute appeared in situ the next day. It is also said that the statue cannot be moved although men have tried. It added credence that Buddha wants to be here.

A door seals the cave used by Rinpoche and opens only once a year in a special ceremony.  We meditated to the sound of our breathing.  A fellow traveler reminded me not to point my feet towards the Buddha.  It is not uncommon for people to have some kind of spiritual experience at Taktsang.

In 2005, there was a fire that destroyed the monastery.  The wooden frame was burnt to the ground, except for the Rinpoche Buddha. It survived despite the intense heat adding even more power to the image of the Rinpoche Buddha. A consortium of international donors helped restore the site to its full glory. 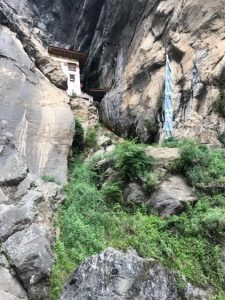 Descent down the mountain was sweetened by the thought of lunch at the Tea House.  The break enlivened all of us knowing we had achieved the summit.

A good massage and a soaking hot bath worked their miracle.  The next morning there was no soreness or evidence that I had ascended the most holy site in Bhutan. 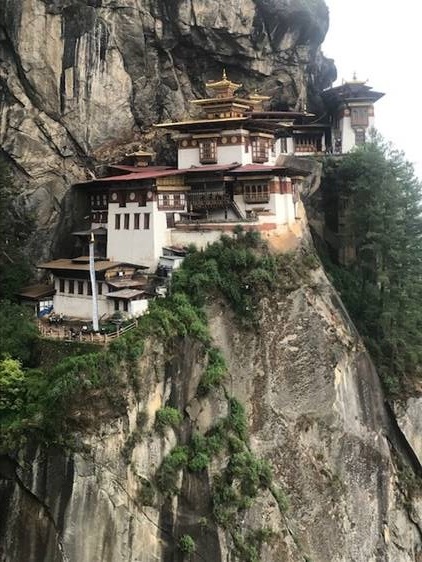