A Special Connection to our Featured Grantee

Caravan to Class, The Big Wish

When DFW member Eileen Rogers celebrated a big birthday, she used it to impact the world.

In 2009, Eileen, along with friend and fellow activist Debbie Hill, launched “The Big Wish”, their fundraising initiative to build and outfit a school in Mali. The pair wanted to turn their “big birthdays” into something significant beyond themselves. They had the support of friends and colleagues who spread the word about the goal. The project was a resounding success, raising nearly $80,000, almost twice the original estimate. 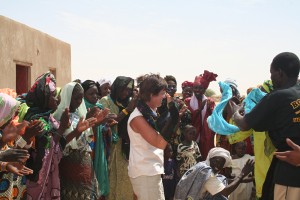 “We were able to really, really expand on the original project,” Eileen said. In addition to a two-room school, The Big Wish included a latrine, a goat herd, a school garden, and more. The additional funds allowed for a library and a pharmacy.

Eileen’s original project was done through the nonprofit TurtleWill, which funded additional schools in Africa. After its founder passed away, operation of the schools was carried on by Caravan to Class, DFW’s March 2017 featured grantee. Eileen said she and the founders of both nonprofits became entwined as they worked toward increasing access to education in Mali.

But her school soon faced a seemingly insurmountable challenge.

“In 2012, when Al Qaeda was in Timbuktu, people fled,” Eileen said. “Al Qaeda used (the school) as storage and stole everything.” Even the school’s solar panels were stolen. It took a partnership with Caravan to Class to bring it back to life.

“It was an amazing project,” Eileen said. “It’s had multiple lives. The school we originally built is where Caravan to Class did their Female Adult Literacy pilot program last year – Tourari, about 10 miles outside of Timbuktu.”

It’s a mission she sees continuing through DFW’s grant to Caravan to Class.

“Caravan to Class and this project that Dining for Women is funding really represent the best of what is in the world right now,” she said. “It’s about building that confidence and allowing women to lead in their families and communities. Investing in women and girls will change the world in so many ways. They get the hard skills of learning, but they get the soft skills that come with being educated.”

Eileen is scheduled to talk about her experience with Caravan to Class and the school in Mali as part of DFW’s International Women’s Day live webcast. Join in to hear more from her.